Manufacturing is central to realising the future we want

Digital technologies are reshaping our economy, manufacturing ecosystem and workplace. Though painful, these changes will enable us to meet our net-zero ambitions, while being resilient and productive. Jonny Williamson reports.

Three things dominate current discourse: economic growth, wealth equality and the race to net zero. Reasons for why this is the case are starkly evident. How these goals can be successfully delivered, however, is a source of intense debate, one which cost Liz Truss her premiership and in record time, no less. The task is made harder by the trio being intrinsically linked; they cannot and should not be tackled in isolation.

As countries strive to create fairer, greener and yet more productive societies and economies, relatively few acknowledge the vital role manufacturing plays. The UK government is especially guilty, with no industrial strategy and seemingly no desire to implement one. Indeed, the Minster for Industry, Jackie Doyle-Price (at time of printing), has said she doesn’t even like the term ‘industrial strategy’.

Yet, manufacturing – specifically, digitally-enabled manufacturing – will be a core enabler of the future we want. One in which everyone has the things they need at a price they can afford without causing harm to the environment or society. That was the message to delegates who attended the inaugural InterAct Network conference in October.

A diverse roster of speakers drawn from across industry, policy, think-tanks and academia shared their unique insights and perspectives on what it will take to create a future digital manufacturing ecosystem that delivers for everyone.

InterAct is a £4.4m Made Smarter Innovation funded network that aims to bring together economic and social scientists, UK manufacturers and digital technology providers to address the human issues resulting from the adoption of new technologies in industry. Its long-term vision is to build an engaged interdisciplinary community to support UK industry in the adoption and development of digital technologies that will result in a stronger, more resilient, manufacturing base. www.interact-hub.org 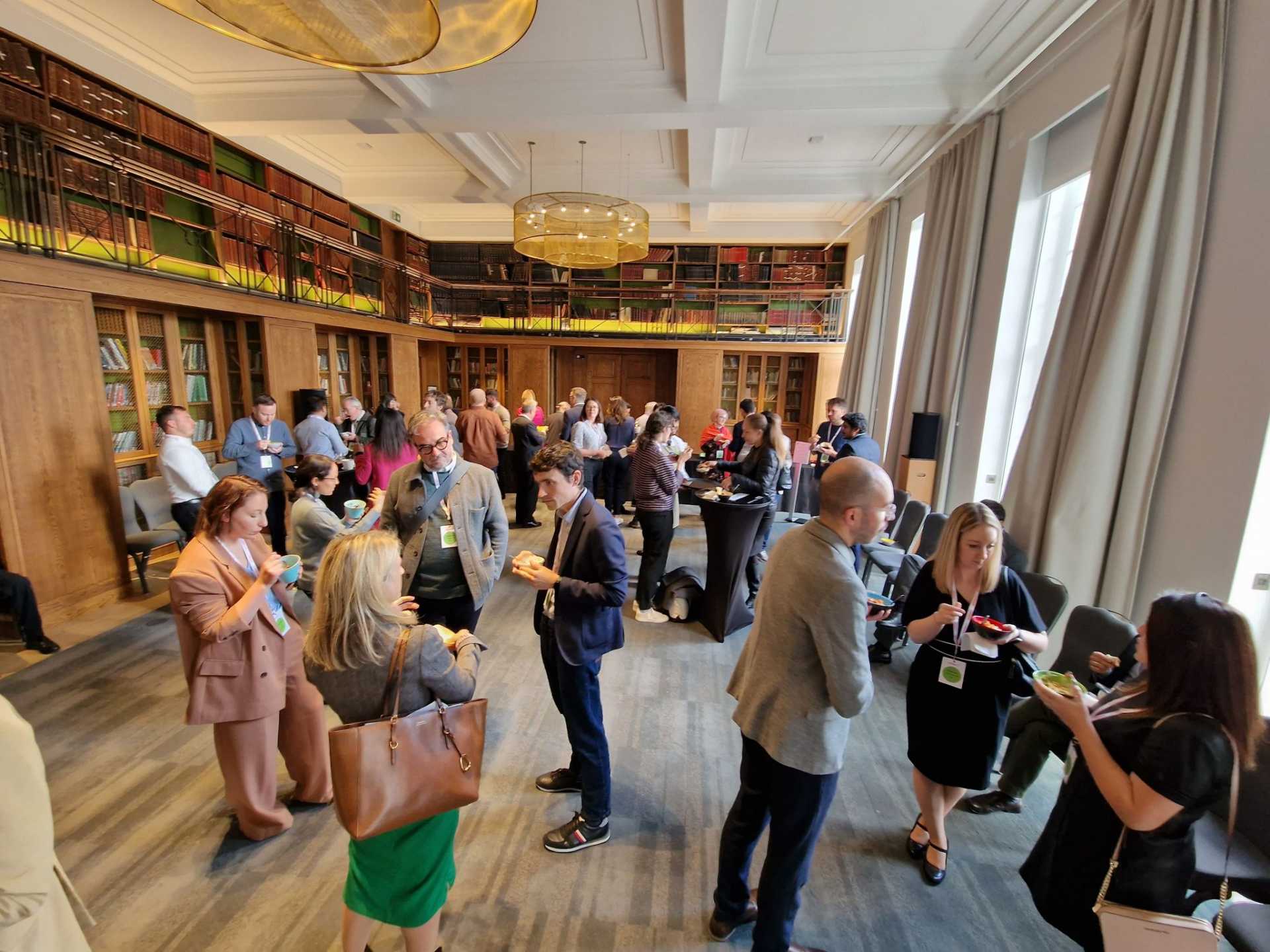 The future is not the past

In his opening keynote, Tamim Bayoumi, Deputy Director at the International Monetary Fund, described how technology has historically widened many forms of inequality, particularly during the IT revolution which took hold around 1980.

Tamim explained that new technologies require new skills. This raises demand for such skills at a time when supply is limited. The resulting wage premium skilled workers can command increases inequality, albeit only initially. Over time, demand for new skills slows and the supply increases which leads to less of a wage premium and lower inequality.

This notion, introduced by American economist Simon Kuznets in the 1950s, broadly holds true for all three Industrial Revolutions to date. Steam, electricity and computers have each provided a myriad of uses that have transformed our lives and the economy. Their impact on inequality has also been similar – an initial rise followed by a plateau.

Does this mean the current Fourth Industrial Revolution will follow the same path? Not necessarily, but we have to accept that IT has created greater inequality than any other technology. This is due to the profound effect IT has had on the economic geography of prosperity.

“Historically, manufacturing required low-skilled labour and land. Factories were therefore located in relatively small towns or on the fringes of larger cities. In 1985, for example, Toyota built its largest US plant in Georgetown, Kentucky; population 30,000.

“By contrast, the main input to IT is skilled workers. Hence, why most IT companies base themselves in cities and large towns,” Tamin noted.

The relocation of cutting-edge industry from small, less prosperous towns to large, wealthy cities over the past 50 years has deepened inequality along three dimensions:

IT’s transformation of multiple sectors, not least manufacturing, has seen the zone of prosperity widening out from major cities to other places. However, this can’t be allowed to result in a corresponding expansion, or indeed continuation, of inequality.

Avoiding such a scenario means providing places that have been left behind with the tools to win in the IT age. Most obviously, education that is focused on the skills needed in the future digital age.

“We also need to do more to help those with talent but limited means to move to where opportunities are through housing support,” Tamin suggested. “We need to pay for both these initiatives. Those who benefited most from the IT revolution, the skilled and landowners, should contribute most via an increase in the marginal tax rate.”

The skillset of industry is adapting

The theme of skills was picked up by Bhavina Bharkhada, Head of Policy and Campaigns at Make UK, who noted that labour is the primary challenge facing manufacturing businesses. The sector is battling to fill 95,000 vacancies which Make UK estimates equates to around £7bn in lost output for the wider UK economy or £21m a day in lost GDP per worker.

Manufacturing is being disproportionately affected by the recruitment woes facing numerous sectors, with around four vacancies for 100 manufacturing jobs in the country. This is more than double the usual level of vacancies which typically stands at 1.9 per 100 jobs, and even surpasses the hard-hit hospitality sector, which is running at 3.6 per 100.

Industry’s long-standing recruitment challenges are being compounded by the very nature of manufacturing undergoing a transformation. This can be seen on four fronts, said Bhavina: “Automation, digitalisation, greenification [sustainability] and flexible work.”

Skills are at the heart of each of these areas, with the digital skills gap considered the biggest barrier to wider technology adoption. On-site working practices are changing rapidly thanks to digital developments such as virtual reality, artificial intelligence, 5G, robotics and additive manufacturing. This has led to a rise in demand for skills such as cyber security, programming and software development, among others.

Additionally, almost two-thirds of manufacturers are changing their skills strategy in order to manufacture products more sustainably, with 40% believing greenification is a key factor driving changes to how they operate and the skills and jobs which their businesses need.

As a result, Make UK has seen rising demand for skillsets relating to:

Something often overlooked is the importance of strong management and leadership during times of change, Bhavina noted. Most manufacturers agree that these skills are key to increasing the adoption of new technologies, yet less than ten percent of training budgets is spent on leadership. This is something being acutely felt by SMEs, many of which identify a lack of access to management skills as a barrier to their future growth.

Bhavina concluded by outlining how government policy could help smooth the transition toward the future of work:

The UK is the ninth largest manufacturing nation in the world; France is eighth and Italy is seventh. All three countries have a similar manufacturing output but France and Italy have twice the UK’s level of automation. Moving up the rankings requires the UK to invest in automation and upskilling. Yet, automation frequently carries a negative connotation.

“Deskilling is a horrible word used to describe the process where skilled people are replaced by machines, but in most instances, this is not what actually happens,” Troy noted. “Usually, when companies invest in software or plant to drive productivity, it leads to workforce upskilling.

“Not only is deskilling the wrong word but it also drives a wedge of distrust creating an ‘us and them’ attitude between teams that should be working together.” LEADERSHIP & STRATEGY Automation is scarier for SMEs because the solution will touch a higher percentage of staff Troy Barratt, Managing Director, Contracts Engineering

Automation will be crucial to successfully reindustrialising the UK, it will provide much-needed capacity and enable the country to manufacture cost-competitively on the world stage. Troy encouraged reframing the discussion to change people’s views of automation from a job-killing negative to a careercreating positive.

Troy is speaking from experience having invested in both factory and back-office automation. CEL currently has one cobot and one robotic welding cell, with plans to be at five-plus by the end of 2023.

“We spend a lot of time and effort on training and upskilling the team in the factory and the offices. This helps to create buy-in for investments,” Troy concluded. “Additionally, because we’re coming from a small base, investments are a win-win for the company and the team. And yes, since investing in automation, our workforce has grown.”

Tapping into the power of purpose

Booth Welsh has coined the term ‘Environment 4.0’ to reflect how smart technologies are helping businesses to deliver tangible results in efficiency, performance, resilience and waste reduction, while also delivering a positive impact on profitability.

“The workforce of the future will be much more purpose-driven. Purpose drives a human-centric approach with greater resilience and societal value,” Aimee explained. “Environment 4.0 taps into the power of purpose using technology and will help businesses cross the bridge to the next phase of industry, from Industry 4.0 to Industry 5.0.”

Environment 4.0 has four defined technology pillars, according to Booth Welsh, all of which have become increasingly commonplace in industry:

“We believe that Environment 4.0 comes with an in-built sense of paying it forward. When you follow these principles as you adopt new business solutions, doing the right thing balances people, planet and profit — with no need to worry about a trade-off.

“As we’re all aware, adopting a change in your way of working isn’t easy. It requires a collective effort. Joining meaningful networks has been key for us.” concluded Aimee.

It was a fitting conclusion as the theme of collaboration ran through the entire agenda. Indeed, it is InterAct’s raison d’etre.

The questions facing business leaders, policymakers and wider society are multifaceted with no easy answer. Equally, the scale of change needed and the timeframe in which to achieve it is intimidating, to say the least. The key will be adapting a systems approach and working together in order to combine expertise from the broadest range of perspectives around common goals.

As Made Smarter Challenge Director, Chris Courtney, commented: “Yes, the future looks daunting but consider what we have already achieved in our lifetimes. Twenty years ago, Tesla hadn’t built anything, Apple hadn’t introduced the iPhone, no one was on Facebook and the term ‘cloud computing’ hadn’t been coined.”

Read more of our