Metrology: crimebusting has a new champion

Professor Mark Williams of the University of Warwick says metrology is breaking out of the laboratory into solving real-world problems.

Metrology, the science of measurement, is a long established and critical aspect of product design and development, used by engineers and manufacturers concerned with quality and reliability.

As the technology develops in sophistication, other professions are catching on fast to its wider potential. The result is that metrology is increasingly being seen in unfamiliar places, from crime scenes to archaeological digs.

Take the abundance of forensic analysis in today’s television programmes as an example; it rarely touches on the role that modern engineering can play in real crime scenes.

While there is still a place for the microscope in forensic work, you are nowadays more likely to see metrology tools like laser scanning; computer tomography; 3D printing, and advanced 3D visualisation being used by crime investigation teams to collect and analyse evidence.

At WMG, we have worked with pathologists and hospital staff on a number of homicide investigations, using metrology to help crime scene investigators and the police gain successful prosecutions. The non-invasive nature of the technologies we use is ideal for recording and documenting fragile evidence, for analysis, and for making clear presentations to juries.

More traditional tools such as data from cameras, tape measures, and other standard equipment can be time consuming to gather and unreliable in scientific terms. 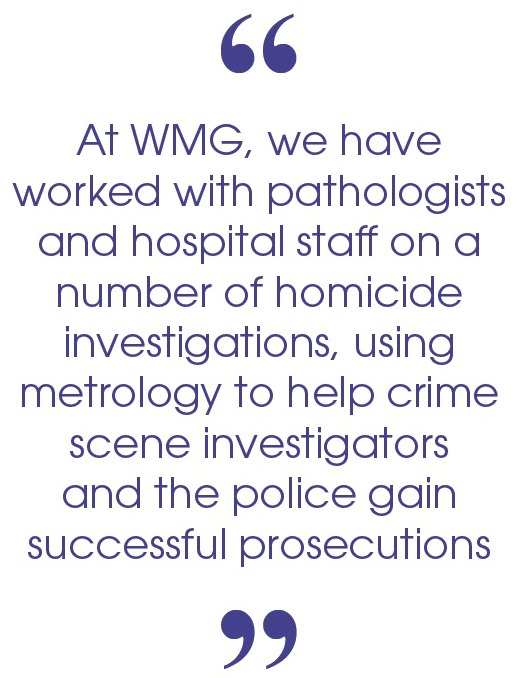 There is also the pressure on investigators to release property back to its owner, or to reopen a public facility as soon as possible after a crime has been committed.

By contrast, we accelerate the process using techniques such as 3D laser scanning that can capture millions of data points very quickly, using a Cartesian coordinate system that helps to document and model a real-world environment.

The result is a 3D ‘point cloud’ that can be used to recreate a virtual model for future analysis. This virtual crime scene can be populated with further forensic information, physical evidence, and digital links to witness statements and photos to create a realistic model that can be shown in the courtroom, providing invaluable contextual information for the jury.

Micro-CT scanning can also provide 3D analysis of objects involved in what are known as ‘sharp force injuries’. We’ve had a great deal of success in tool-mark analysis and weapon-wound matching, a developing area within forensic pathology, which helps to establish the class of weapon used to commit a homicide, or to link a particular object to a specific crime.

I have also been able to see first-hand just how useful these technologies can be for the heritage sector. Our precision scanning technology, normally used to solve high tech engineering problems or create new product designs, was able to reveal that archaeologists searching a shipwreck had found an extraordinarily rare silver coin called an Indio. Its rarity is such that it has legendary status as the ‘lost’ or ‘ghost’ coin of Dom Manuel.

Non-invasive scanning and evaluation, and the fantastic visualisation that we can gain with technology such as our 3D power wall, has also enabled archaeologists to find out far more than they previously thought possible, without causing any damage to precious artefacts. We’ve assisted with some extraordinary items, from ancient Babylonian tablets to Michelangelo bronzes, and even the virtual reconstruction of a Roman fort.

As an academic and engineer by background, working in collaboration with such a diverse range of partners to find solutions to real challenges is always exciting. When you add the fact that by pushing boundaries and applying our skills and technology to new areas we can have a real impact on society, it is fantastically rewarding and shows that the field of metrology has come a long way.

For more information on what Professor Williams and WMG do, visit the website.