Posted on 7 Apr 2016 by The Manufacturer

Mettis Aerospace provides precision-forged and machined components for the likes of Airbus, Boeing and Rolls-Royce, and has an annual turnover of £60m.

When three companies merged in 2001 to form Mettis Aerospace, it relied on two main IT systems. Installed in 1992, EFACS was used for financials, while Sanderson PICS covered production.

The systems supported four main business units on one site. One of the challenges being that each unit had its own unique processes.

The use of the two solutions meant that reporting and general access to information could be difficult and time consuming.

“It was very fragmented and took a lot of handholding to ensure the data got to where it needed to be.” says IT manager Dave Green. “From an IT perspective, we were unable to move the business forward.”

“We wanted a common business system with a central data repository. We needed to streamline our processes, so we needed workflow. We also wanted to improve data availability.”

The decision was between Exel’s EFACS E/8 and Sanderson Unity. Both offered a reimplementation for the cost of an upgrade.

Not liking its multi-value database technology, the Sanderson solution was soon ruled out.

By opting for EFACS E/8, data could be extracted from both databases, restructured and reloaded. The system could also be tailored without the costs of bespoke customisation. Processes were able to be streamlined as workflow came as standard. 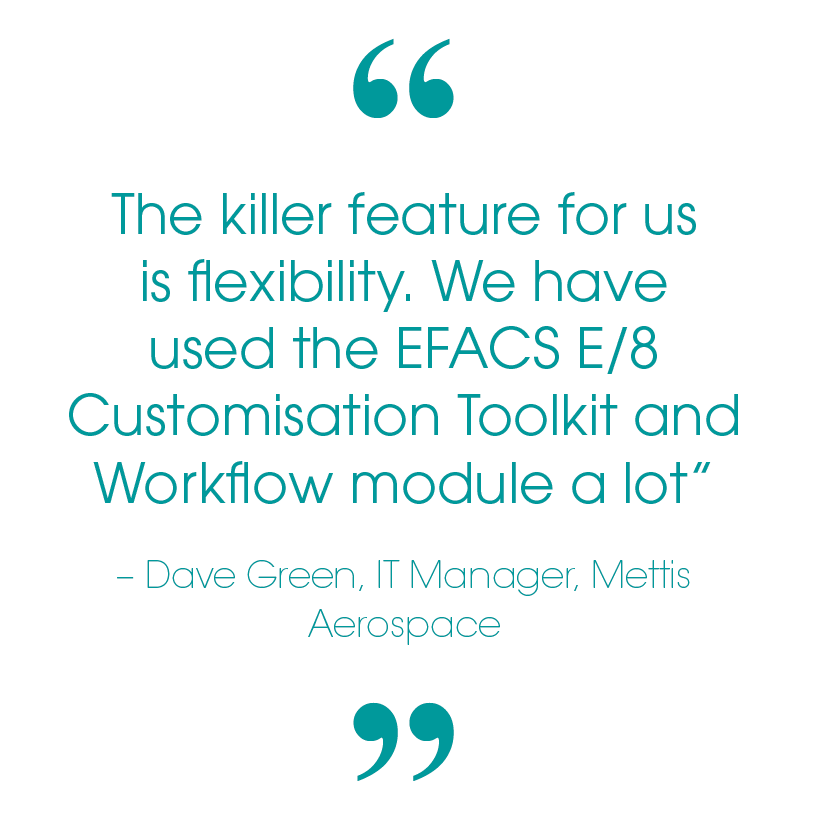 “We have a really good long-standing relationship with Exel. The feature set of EFACS E/8 fitted with our objectives and the implementation cost was favourable.”

As the overall project manager, Green called upon Exel for project management, data mapping and training skills. Training was given by Exel to an in-house implementation team, drawn from key departments, who then wrote new process documents.

After a final preparatory weekend in November 2013, the new system went live for more than 100 users on the Monday morning. An invoice run was successfully completed by lunchtime.

The operational differences were immediately noticeable. For example, the company’s test and release quality assurance process had been rationalised across the four main business units.

“We managed to pull all the different ways of working from the four business units together into one process for each functional area like purchasing, finance and sales.”

Mettis Aerospace has spent two years building on these achievements. The new database, using Microsoft SQL Server, is a single data repository which also helps when tailoring the system.

“The killer feature for us is flexibility. We have used the EFACS E/8 Customisation Toolkit and Workflow module a lot,” says Green.

More automation and streamlining of business processes is planned to increase productivity. Contract Control and Engineering Change Control modules are being looked at too.

“The availability of data is now vastly improved. We can get at the data like we have never been able to before,” says Green.