Posted on 6 Oct 2021 by The Manufacturer

Key figures, including Minister for Business, Trade, Tourism and Enterprise, Ivan McKee, attended the event on Tuesday, marking a significant development within the region and Scotland’s growing advanced manufacturing industry.

At over sixty thousand square feet, the new NMIS facility incorporates the Metallics Research Centre with Boeing, which will see the delivery of Boeing’s £11.8m R&D programme in collaboration with the University of Strathclyde’s Advanced Forming Research Centre (AFRC), part of the NMIS Group.

Aiming to reduce materials waste and identify opportunities to improve safety, productivity, and the environmental impact of its aircraft, technical teams from Boeing and NMIS are exploring novel manufacturing technologies for metallic components, building on over a decade’s worth of R&D with the University of Strathclyde and the AFRC, where Boeing is a founding partner.

Part-funded by Scottish Enterprise, the programme is the first initiative within the Boeing Scotland Alliance, which is exploring opportunities to work together in Scotland, with the aim of doubling Boeing’s supply chain and creating 200 new quality jobs in the next five years.

The new R&D facility will also house cutting edge manufacturing equipment for use across NMIS projects with other innovative manufacturing businesses across the country, bolstering the support already provided through its specialist technology centres the AFRC and its Lightweight Manufacturing Centre (LMC).

In the adjacent manufacturing district site, construction is continuing on the new NMIS headquarters set to open later next year, which will include a skills academy, collaboration hub and digital factory. 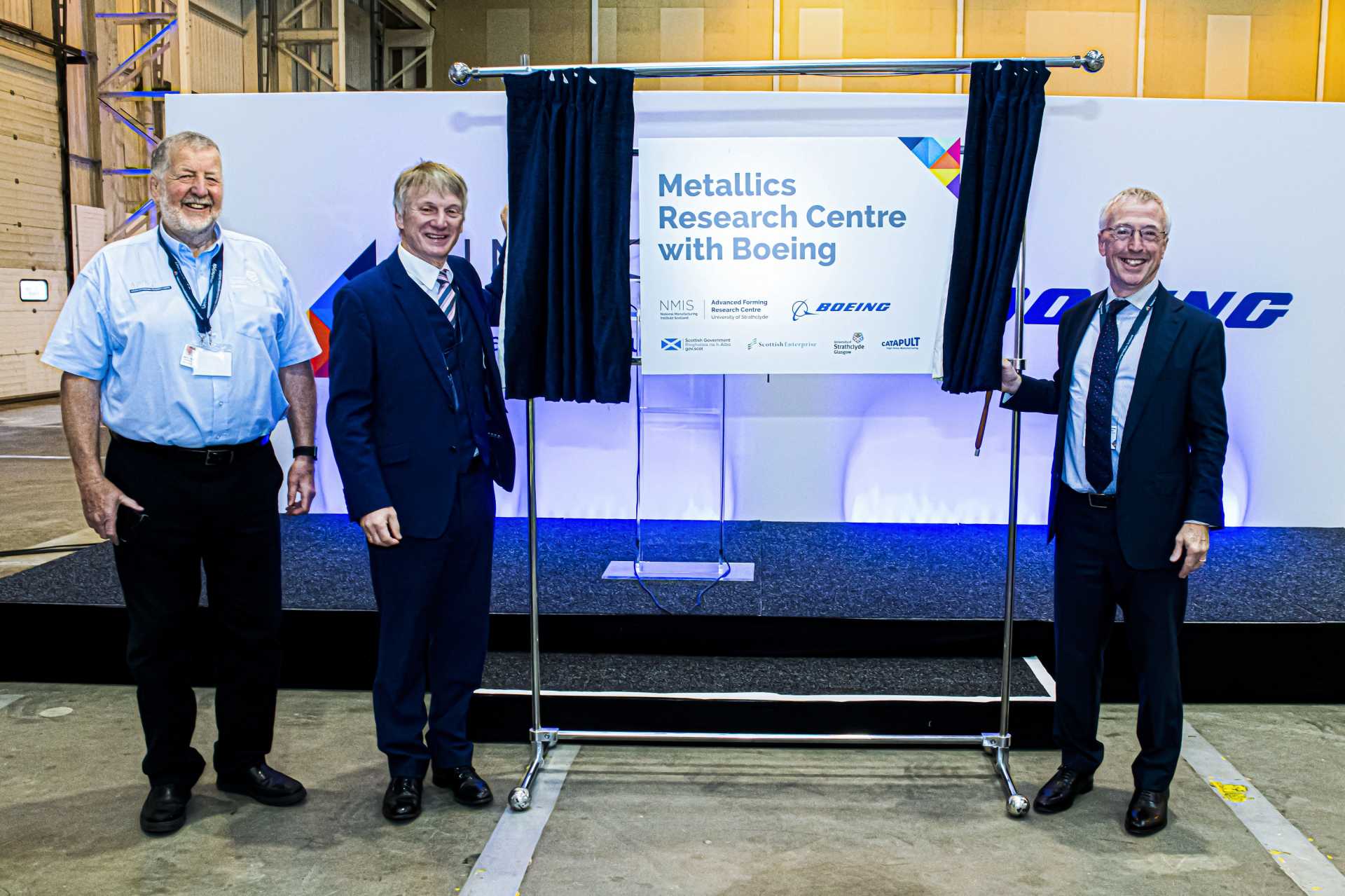 “As we recover from the coronavirus pandemic it is vital government and industry innovate together to build a stronger, fairer and more sustainable economy. This project shows our £75 million investment in NMIS is already delivering on that ambition.

“Aviation and aerospace have a crucial role to play in fighting climate change. We are committed to ending Scotland’s contribution to climate change and, critically, ensuring we do that in a way that is just and fair for everyone.”

“This a huge development for Scotland, cementing our dedication to advanced manufacturing innovation on a global scale and the benefits that this can bring to our economy.   We’re excited about what the future holds for this new facility, the ground-breaking R&D taking place there, and how we can build on our manufacturing expertise to support Boeing on its journey towards net-zero.”

Sir Martin Donnelly, president of Boeing Europe and managing director of Boeing in the UK and Ireland said:

“This opening is significant because it’s a sign of the commitment Boeing and Scottish Enterprise made when we announced the Boeing Scotland Alliance and this R&D programme.

“The NMIS and Boeing teams have worked tremendously hard through a global pandemic to bring us to this point, and we all know that so much more is still to come from this agreement for the future of manufacturing and aerospace.”