Posted on 9 Sep 2015 by Jonny Williamson

Oil & Gas UK’s Economic Report published today reveals the impact of the challenging business environment on the offshore oil and gas industry and provides the first signs that the sector’s efforts to restore international competitiveness are starting to take effect.

The annual report – published by the UK oil and gas industry’s leading trade association – finds that the sector has been particularly challenged by the drop in commodity prices due to production decline and the sharply rising cost base, but that concerted action by the industry to improve efficiency across the sector is leading to an estimated 22% – more than £2bn – reduction in the cost of operating existing assets by the end of 2016.

Supported by the first annual production increase for 15 years, the unit cost of operating UK oil and gas assets is predicted to also improve.

Oil & Gas UK’s economic director, Mike Tholen detailed the improvements: “Strong investment in asset integrity over the past four years, coupled with measures being taken to improve the efficiency of assets offshore, have resulted in better output from many existing fields and we expect the rate of decline in production from those fields to slow significantly over the next two years.

“Taken together with the start-up of the sizeable Golden Eagle field, the Government’s provisional data show that production in the first half of 2015 was 3% higher than the same period in 2014, an indication that over this year, we are likely to see annual production increase.”

The industry has been focused on bringing costs down and improving efficiency for the past 18 months, and Oil & Gas UK last week launched its ‘efficiency’ task force to step up the pace of change. 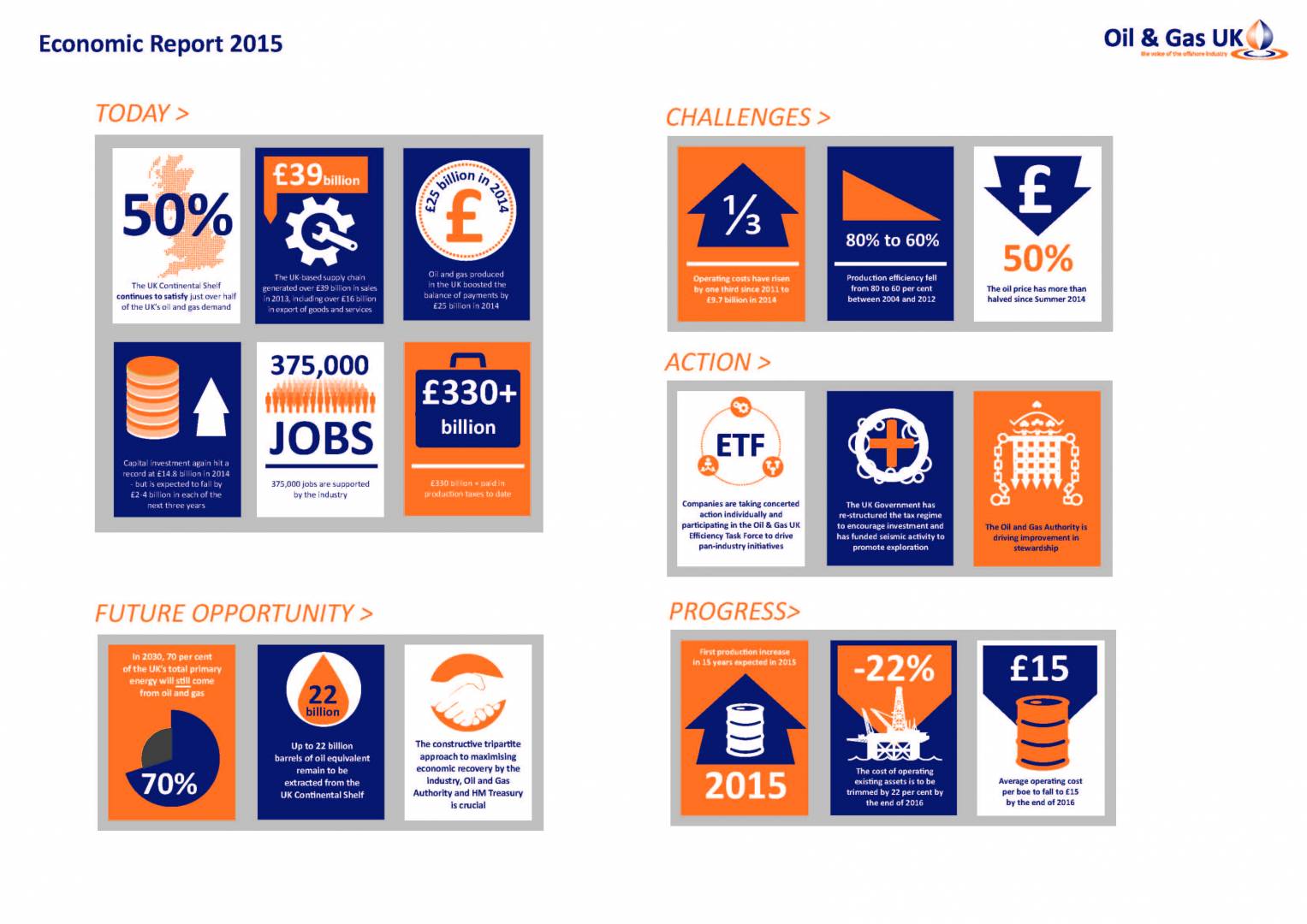 Tholen continued: “We are now seeing companies’ commitment to improving cost and efficiency reflected in industry performance. While the improvement will be offset to some extent by £1.1bn of operating expenditure relating to new fields brought on stream in the intervening period, these new developments are vital for the future of our industry, in terms of both oil and gas production, as well as the commercial opportunities they bring for the supply chain.”

Oil & Gas UK’s chief executive, Deirdre Michie continued: “This great industry of ours is facing very challenging times. Last year, more was spent than was earned from production, a situation which has been exacerbated by the continued fall in commodity prices.

“This is not sustainable and investors are hard-pressed to commit investment here because of cash constraints. Exploration for new resources has fallen to its lowest level since the 1970s and with so few new projects gaining approval, capital investment is expected to drop from £14.8bn (2014) by £2-4bn in each of the next three years.

“Difficult decisions have had to be made across the industry. We estimate that employment supported by the sector has contracted by 15% since the start of 2014 to 375,000 jobs. It is likely that capacity may have to be reduced still further in order for the business to weather the downturn. The Scottish Government’s Energy Jobs Task Force and New Anglia Local Enterprise Partnership are active in supporting affected businesses and employees.

“The industry is under a lot of pressure and it is now widely recognised that a transformation in the way business is done is required if the UK sector is to become more resilient and competitive in a world of sustained lower oil prices. The challenges are being tackled head on – even before the oil price fall, industry’s attention was focused on improving our cost competitiveness whilst upholding the safety of the workforce.”