To stimulate an adequate supply of trained engineers into industry, we need to radically change the way we teach, train and develop people at every stage of their lives. A new study proposes such a vision and offers a roadmap for how to get there.

Skills, talent and people development may not be specifically referenced, but there’s no question that they absolutely underpin every opportunity facing the UK, and therefore every initiative and target the government has in place.

Producing the right skill mix is essential for personal, commercial and national growth. Aside from some isolated pockets of excellence, the UK is largely failing in this regard.

For the past four decades, every study and piece of research shows that we aren’t producing anywhere close to the number of skilled engineers and technicians we need.

UK MANUFACTURING AND THE EDUCATION SECTOR 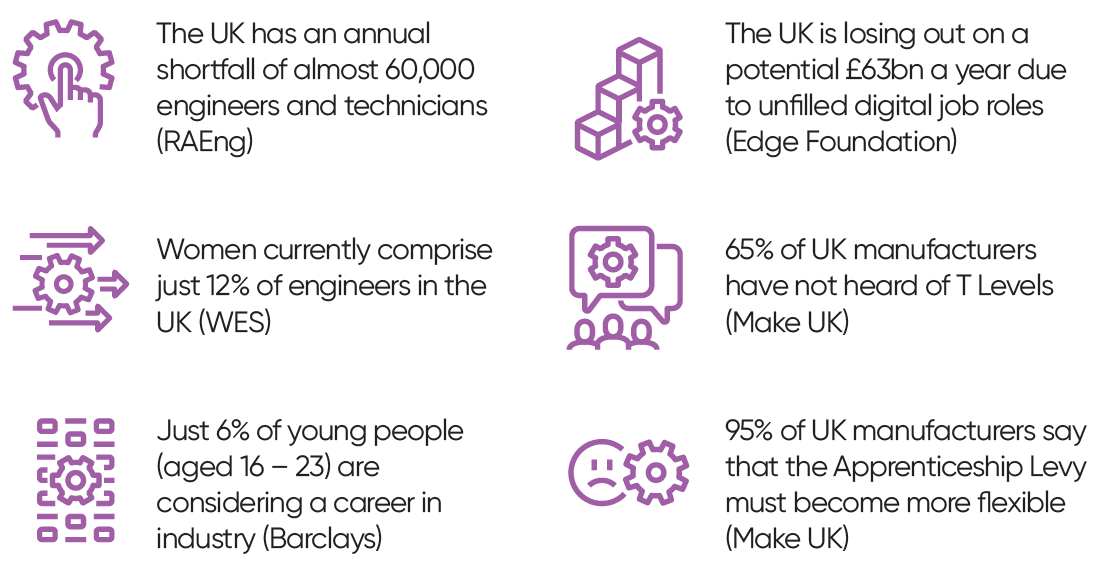 Our frustrating lack of progress to this perennial issue is making the lives of industrial business owners even more difficult, as anyone who’s spent longer than 60 seconds with one of them will no doubt have been made aware.

That these studies and discussions are taking place demonstrate that we’re aware of the problem, but attempts to solve it have so far proven ineffective.

A Royal Academy of Engineering report published at the beginning of 2019 summed up the situation, stating that over the past five years, “the UK has seen little to no progress with regard to growing its engineering workforce”.

A damning indictment that echoed a similar report from the CBI which noted that almost 30 skills reforms in as many years had successfully alienated businesses, confused learning providers and failed to deliver the skills the country needs.

To compete globally, the UK needs high level engineering skills embedded within a diverse workforce; a workforce that is ready to not only adapt to but lead through unprecedented disruption.

The current model in engineering assumes a pipeline of individuals building a large resource of subject-specific knowledge (whether through university or a more vocational pathway).

This knowledge is augmented with skills relating to collaboration, management, communication and business processes to provide a broader ‘career’ skillset.

This model creates T-shaped people, where the technical knowledge has to exist before other elements – the horizontal part of the T – can be added. There are two flaws inherent with this approach:

What’s needed is a new approach, one that offers a broader perspective on engineering skills in the future and can transform the current ‘leaky pipeline’ into a ‘reservoir of talent’.

A new piece of research – Talent 2050: Skills and Education for the Future of Engineering – puts forward such a change and sets out a roadmap to make it a reality. 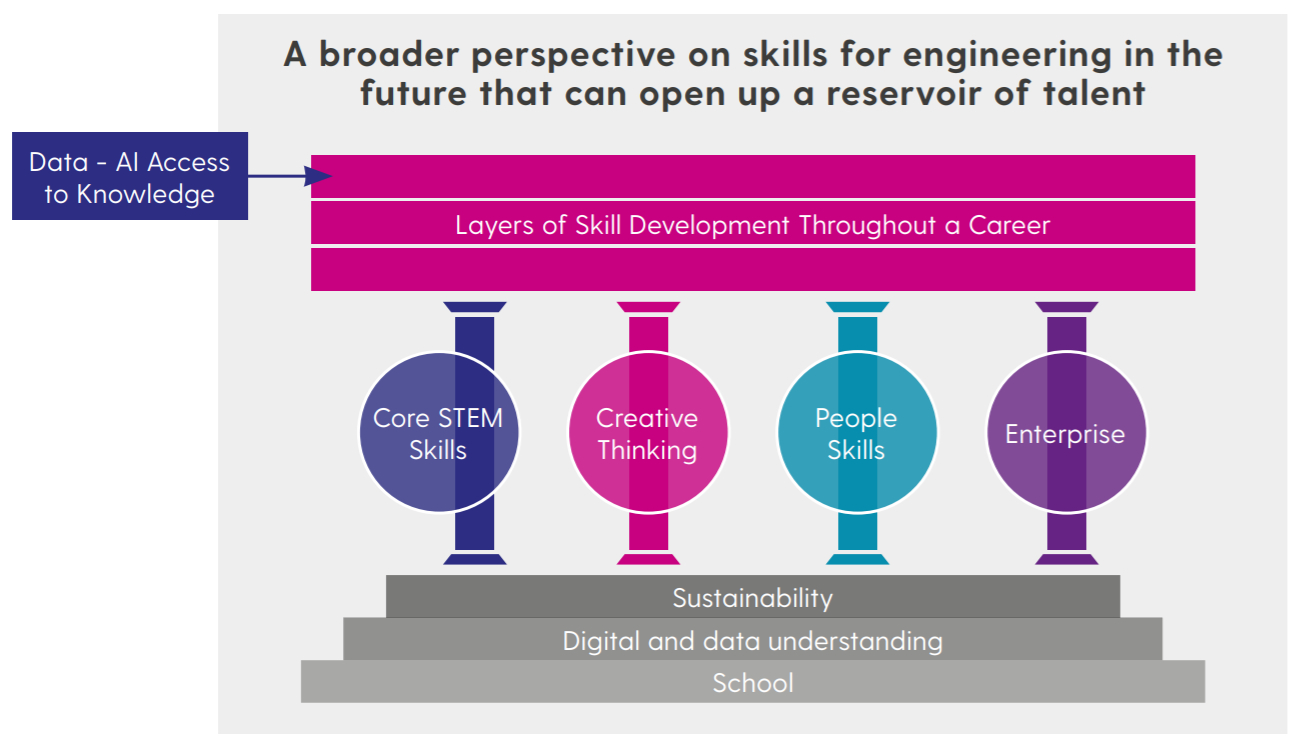 By no means is this the first such study and I can guarantee it won’t be the last, so what separates this one from the pack?

“The potential for intersectoral recruitment (where the skills of the horizontal part of the T are in place through education or work experience, and the missing engineering elements are added later) opens recruitment potential to a more diverse workforce and enhances diversity faster than waiting for changes in school-age education to feed through,” the report notes.

To mark the launch of the report, its proposals were dissected at an exclusive roundtable event held at Barclays’ headquarters in Canary Wharf, attended by almost two-dozen stakeholders.

The group was largely positive towards the report’s suggested framework, particularly the emphasis on so-called ‘soft’ skills like creative thinking and communication, as well as the foundational layers of digital literacy and sustainability.

However, several attendees voiced concerns around its practical application, one of which were frustrations around the lack of communication between the Department for Education (DfE) and the Department for Business, Energy and Industrial Strategy (BEIS).

“The education landscape is very fragmented and none of the stakeholders are really talking to each other. What is announced by government, for example, is completely contradictory to what we are hearing from the DfE,” one delegate commented.

“DfE is largely trying to solve yesterday’s problems, rather than grabbing the opportunities of tomorrow. The proposed T Levels may be a better version of the past, but we need to become much more forward-facing,” added another.

Similar frustrations were expressed over the side-lining of design and technology (D&T) in schools – an issue The Manufacturer has raised on several occasions, with too many STEM activities focused solely on Science and Mathematics, ignoring the Technology and Engineering elements.

Challenges around a lack of qualified D&T teachers and how to recruit them, and the high-cost of industry-specific equipment, however, were both raised.

The concept of a ‘job for life’ has rapidly become defunct; I’ve worked for eight organisations and for people my age (mid-thirties), that is by no means excessive. And yet the decisions we make at 16 or younger are still largely dictating our career options for the next 50 years.

That must change, the group agreed, with our need to reequip an aging workforce to become economically more viable for longer adding additional pressure.

The realisation led the group to discuss whether a change in national focus was required, a shift from ‘what skills do we need?’, to ‘how do we continually teach, train and develop people of all ages and backgrounds at all stages of work?’.

“There is a conflict between what we want to teach versus perhaps what we should be teaching. We’ve become comfortable teaching what we know and there’s resistance towards changing that,” said one attendee.

“Too much of the curriculum is taught ‘just in case’ it is needed, rather than what is actually needed by individuals and businesses,” noted another. Though the group questioned whether we – as a society – were mature enough to properly identify the latter.

“The pace of change and technological disruption, particularly in engineering but by no means exclusively, is faster than our education system can possible keep up with,” added another attendee.

While most would agree that collectively – industry, academia, government – we are pushing for the best of tomorrow, we are being weighed down and struggling with the best of today (or more realistically yesterday).

The report’s recommendations [see box below] show a willingness to do something different, but we need to be enabled to make these changes effectively and sustainably, and that takes money – the elephant in the room.

It’s perhaps unsurprising that investment was the last thing on the list of things for the group to discuss.

Making root and branch changes to our education system, equipping our schools with modern equipment in order to properly teach STEM classes covering all four subjects, providing development and training opportunities for individuals throughout their careers.

Changes such as these represent a significant, ongoing investment, so who’s going to foot the bill?

The report notes that the changes are an essential part of the UK remaining globally competitive, so the responsibility should be jointly shared between the state, employers and individuals.

It goes on to say that individuals should be “expected to fund their advancement” so long as mechanisms were there to support them, “both through easily accessible online learning and through access to finance, including loans, for larger investments.”

The room’s consensus chimed with that of the report, reinforcing the need for the end-to-end process to become more collaborative and continuous, rather than the current dislocation that exists between the state, employers and academia.

The roundtable’s host, Mike Rigby, Barclays’ Industry Director for Manufacturing, Transport, and Logistics, shared his perspective, one that chimed with that of most attendees;

“I believe that the more the curriculum is influenced and informed by the real-world issues businesses face – regardless of the vehicle by which that takes place, the more enriched it becomes with greater diversity and modality.”

Talent 2050: Skills and Education for the Future of Engineering

Talent 2050: Skills and Education for the Future of Engineering was supported by Barclays; London South Bank University; the National Centre for Universities and Businesses (NCUB); NATS (formerly National Air Traffic Services), and Pearson, a global publishing and education company.

The report’s authors were:

You can download a copy of the report at bit.ly/Talent2050

*All images courtesy of Depositphotos.