Technology may sit at the heart of Digital Transformation, but market leaders also see it as an opportunity to drive positive cultural change and improve employee engagement.

Almost all digital transformation conversations centre on technologies, equipment and systems. The questions businesses typically ask include: what solution best meets our objectives? What can we afford? Where should we start? What will bring the greatest or quickest return?

What’s often forgotten is the real driver of a successful adoption – fostering a culture where your employees are more engaged, informed, satisfied and, crucially, productive.

Advanced technologies aren’t replacing human roles but augmenting them, alleviating workers from repetitive, arduous, low-value tasks and allowing them to focus more of their time on creating value.

Nowhere is this more evident than in the high-octane world of Formula 1.

“You can invest in all the latest technologies and bits of kit, but if you haven’t got the right people, and you’re not supporting them to the best of your ability, then you won’t reap the full rewards from your investment,” says Matt Harris, Head of IT at Mercedes-AMG Petronas Motorsport.

The race team has spent a great deal of time and effort on creating a winning culture, with continuous improvement a particularly focus. Incremental gains have always been important, but the philosophy has become deeply embedded in their culture over the past five years.

“Making sure we’re supporting our people with the right technology or capability is critical. If we get that right, then all the other business capability improvements that we’re striving for will come,” adds Harris.

VIDEO – What can businesses learn from the way Mercedes-AMG Petronas Motorsport empowers its people? 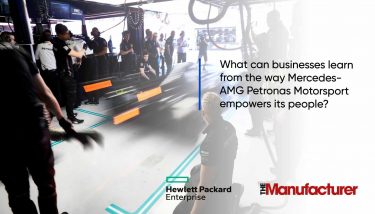 In as little as 176 hours, the Mercedes-AMG Petronas Motorsport team manage to design, simulate, manufacture, ship and fit a new innovation.

How? It’s all thanks to its deeply embedded culture of continuous improvement and enabling its employees to embrace new technologies and methodologies.

Head of IT, Matt Harris, explains that if you get the people factor right, all the business capability enhancements they are looking to achieve will follow.

Achieving the perfect pit stop is far from easy and requires absolute harmony from everyone and everything involved. Though cars arrive and depart in little more than two seconds, speed (surprisingly) isn’t the most important factor; consistency is.

To ensure that the pit stops are as consistent as possible from the very first race of the season, the team completes around 60 mock pit stops every week during pre-season – about 300 in total.

“It’s absolutely incredible to watch four tyres being changed in two seconds, and improvements come down to fractions of a second,” Harris explains.

“Making our pit performance as fault-tolerant as possible comes down to the people. Yes, there is technology involved, but humans are the most likely failure point. So, we spend a huge amount of time to innovate around our people, as well as other factors like technology and equipment design and positioning.”

The world of Formula 1 may sound like a long way from a traditional manufacturer, but there are clear parallels between the two.

Development and production can be as little as a week or less, but a race team still goes through the exact same process as any manufacturer: design, quality assurance, manufacture, testing and release.

“My team and I work very closely with Mercedes-AMG Petronas Motorsport and the speed of development may be faster, but that just brings potential issues to the fore quicker,” says Ian Henderson, chief technologist for manufacturing at Hewlett Packard Enterprise (HPE).

“What’s great about working with the team is that I can take learnings from their world back into more traditional manufacturing. For example, I find their continuous improvement process and a ‘no blame’ culture fascinating, something that would be of benefit to a business of any size or sector.”

Upon arrival, Henderson and his team were told that if there was a fault with a piece of equipment, then it wasn’t acceptable for that component to just be replaced.

Whether the component in question is on the car, in IT or any other part of Mercedes-AMG Petronas Motorsport, a comprehensive root cause analysis is always carried out to understand the cause of the malfunction and to ensure that it doesn’t happen again.

Racing to the finish line

One of the challenges manufacturers face is getting entangled in technology proof of concepts that demonstrate some value but never go anywhere.

This is often because stakeholders haven’t clearly defined the objectives or business value the pilots will deliver.

“Some initiatives appear to be a case of businesses investing in technology for technology’s sake,” notes Henderson. “To overcome that and better prove the value of a project we would advise taking a sprint-based approach.”

Working in agile ‘sprints’ is something that Mercedes-AMG Petronas Motorsport has embraced, and it appears to be paying off. The team has achieved consecutive Drivers’ and Constructors’ Championships from 2014 to 2018, making it one of the most successful in recent F1 history.

HPE has helped embed a similar methodology in other businesses, such as Hirotec, one of the world’s largest automotive components manufacturers.

By partnering with HPE, Hirotec was able to define a series of short, sharp sprints with a predefined value and outcome at the end. In Hirotec’s case, the desired outcome was to create a connected, intelligent factory.

“We connected a number of Hirotec’s CNC machines over a six-week sprint,” Henderson explains. “By optimised the operation of the existing equipment, we demonstrated that Hirotec could avoid the potential investment they were going to make in another CNC machine.

“Based on that saving and value, we showed them subsequent steps they could take to connect more and more of their production line. The project was geared around incremental gains, rather than a single, massive project undertaking that would either never receive sign off or take too long to deliver the value anticipated.”

From smart manufacturing, to smart factory – to smart enterprise