Posted on 27 Apr 2016 by Victoria Fitzgerald

What does the future hold for Rachel Eade MBE after the unexpected wind down of the Manufacturing Advisory Service? It turns out it was the nudge she needed to go it alone. Victoria Fitzgerald reports.

I have crossed paths with Rachel Eade on more occasions than I can count since I began my tenure at The Manufacturer.

Eade has judged The Manufacturer Top 100 since its inception in 2014, judged the TMMX Awards, and is a regular attendee at TM events as a tenacious supporter and expert in the manufacturing sector.

After the untimely closure of the Manufacturing Advisory Service (MAS) and the winding down of the Business Growth Service following the Autumn spending review, I was keen to understand her perspective on how its closure would impact the sector, not to mention, what she had up her sleeve in terms of a future career move.

Eade told to me that she had studied George Osborne’s speech and was confident that if there had been any hint, no matter how subtle, as to the fate of MAS, she would have picked up it.

“There was no consultation or prior warning in terms of the statement. So there was no chance for MAS as an organisation to make cuts or propose savings, we didn’t get that opportunity.

“Similarly, there was no conversation with users, both the direct users in terms of the SMEs, but also the other wider users of MAS, about the services they really need and are willing to pay for. The growth hubs that are going to continue to support SMEs, weren’t involved in any conversation.”

The removal of MAS leaves a gaping hole in the sector because it was tailored explicitly for manufacturing, “It was set up specifically as a response to demand from companies to support in growing specifically manufacturers.

In her 20-year career, Eade has assisted more than 2,500 companies, helped safeguard 11,000 jobs, and created in excess of 5,500 new positions with expanding manufacturers.

Eade is married with two children. She has a keen interest in antiques and collectables, and owns an eclectic selection of books, glass and Arabian artefacts. She is a registered Science and Engineering Ambassador, and regularly supports a local school – both staff and students – with enterprise and commercial projects.

“It stood alongside other generic business support programmes and universities, and had established itself through the longevity and passion of its advisors, as the place to go for support, information, advice, as well as a referral point for other organisations.

“So it isn’t just a loss in terms of the SMEs or larger companies, it’s a loss for the supply chains. One of the things we were quite proud about – particularly in the West Midlands, where we started it – was that if we were ever asked a question, we never failed to find someone in the UK who could answer it, and that was all done through networking.”

For manufacturers seeking support to export, innovate or find the right skills to foster growth, Eade remarked they would “have to be creative in how they source their support”.

She continued, “The money that Osborne alluded to in his Statement, it felt like every growth hub was going to get some, in the conversation that followed, it transpired to be competitive money, so they’ve had to bid for it.

“It will take time and varied solutions across the country, some will step up to it and others maybe won’t in such a strong or aggressive way. For the manufacturing suppliers, it doesn’t provide a clear route of support. That was key support that was there.”

Eade noted, however, that specialist support still exists in various forms including the Catapults, universities, as well as Innovate UK, to name a few; but now what’s missing is the referral system in MAS, where experts would have understood which organisations to direct firms to, to address their specific concerns.

Osborne said the private sector would have to step up to the plate in an attempt to fill the void left by MAS. Eade voiced her concerns in reference to this, and elaborated that although private sector accountants and lawyers are capable, because of the vast differentiation in the manufacturing sector, their specialist knowledge on certain areas would be flawed.

Eade used R&D Tax Credits as an example: “Most mainstream accountants will probably attempt it because they can do the numbers, but they aren’t able to do the innovation narrative part of the claim because they aren’t specialists in it. Manufacturing is a very complex arena.”

Eade mentioned that she’d heard on the grapevine of a possible reinvention of MAS, but she also mentioned that this would take time and in that time lapse the infrastructure, the skills and the people that were integral to the success of MAS would be lost. 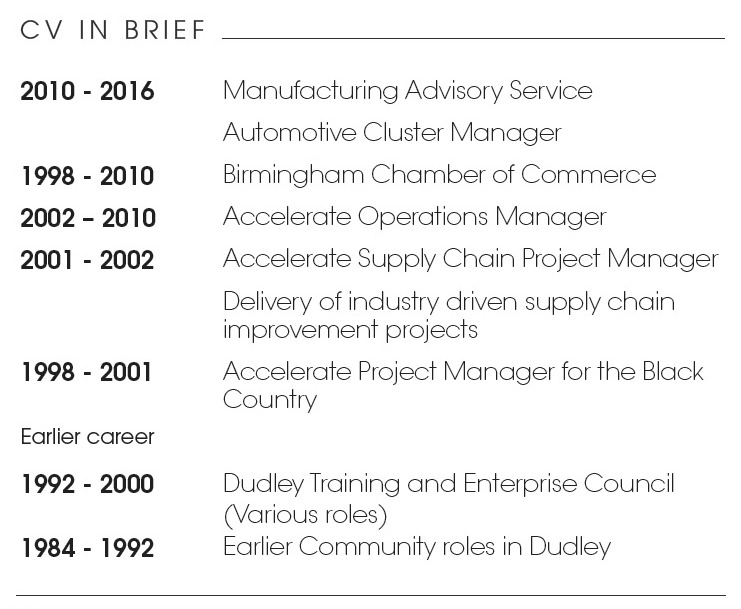 Eade underlined that manufacturers are facing problems right now: “Those in and around supporting manufacturing recognise that 2016 is going to be a difficult year and all of the early figures coming out this year are showing reduced GDP and turnover, and those are the challenges moving forward.”

Despite the disbandment of MAS, Eade confessed that she loves her job and she has been doing it for the best part of 20 years, so going it alone on a crusade to continue her support of manufacturing growth seems like the natural next step. “I’ve established a company called RED, Rachel Eade Developments.

“It’s currently me, but I’m working closely with a collection of likeminded colleagues, with the intent of continuing to work with and support the ambitions and growth of West Midlands SME manufacturers.”

RED’s focus will be on the West Midlands, but Eade admitted that the organisation won’t be exclusively for companies in that area. Eade is collaborating with six other individuals, all with different skills and experience, with an aim to review diagnostics and make those same referrals for companies in need of support either among themselves or to other specialists.

She elaborated: “It’s important that companies maintain the relationships gained from involvement with MAS, and continue to build on them. One of the really strong elements that maybe the Government didn’t understand about the MAS advisors and the service, was the loneliness of being a loner [manufacturing] MD.

“These individuals have to understand a wealth of information and make an enormity of important decisions. They need to have someone to talk to as a coach or mentor that they trust. We want to offer that road to companies for growth, innovation and development.”

As disappointing as the fate of MAS was and still is, Eade admitted that she perhaps wouldn’t have ventured out on her own without a nudge in the right direction. “It’s a little bit of the unknown and practicing what you preach, encouraging people to take those steps. But the other thing that’s really important for me is retaining my independence.”

In the short term, Eade is setting her sights on winning new business, continuing to work with existing contacts and demonstrating that the director has the same added value benefits working for RED as she did operating under the corporate umbrella of MAS.

In the long term Eade said: “I want to work with my colleagues to grow our own businesses over the medium to longer term.”

In light of March being Women’s History Month, Eade and I moved on to the much debated topic of women in manufacturing. I mentioned to Eade that I thought the women in manufacturing debate had stagnated slightly, but Eade disagreed with me, and highlighted that there is a ‘lifespan’ in achieving obvious changes in gender equality in the sector.

“I think we are making strides in terms of attracting young ladies into engineering. Naturally there is a life span to achieve that, particularly at high-level roles,” she explained. “We haven’t made huge steps in progress, yes there is always still barely a handful of women in the room when we go to events and into companies.

“But if you look at the SEMTA awards, the Apprentice of the Year and the Skills Olympics there were women winners in all of those and I think that is great for raising the profile of women in manufacturing.

“I am encouraged by the number of apprentices that are coming through, but part of the problem is, it takes time, and an apprenticeship can take up to five years. By the time an individual gets into a team leader or management position, it is a 10 or 12-year cycle, not to mention that we naturally lose people along the way too.”

But Eade isn’t disenchanted by this, and explained that the fact we were discussing it was part of the progress itself.

“There is lots of conversation and I think there is a growing recognition and desire to have more women in industry. This is partly driven by the general skill shortage in manufacturing, if you exclude half the population, you are not going to address the skills problem, so the fact we are talking about it is good.”

Although Eade is positive, she acknowledged that there is still much to do to sustain the momentum of the upward trajectory. She advised that the strategy needs to be bottom up and top down, as well as include increasing the rate of opportunity for women in their early and mid-careers.

Eade said: “You can do your training and get a first position, then beyond that the progress is slow. I think that’s another period in women’s working careers where support is required. Not just up, but across the career ladder.”

As a conclusion, Eade suggested that the industry seek to attract women into the sector later on in their careers from other sectors, at which point she freely admitted she has always been vocal about the fact that she isn’t an engineer, “I am quite open about it; I am not an engineer. I trained in the hotel and catering industry for the first five years of my career.”

Engineer or not, Eade has a staggering wealth of practical knowledge on the sector, a wealth of knowledge that manufacturers can capitalise on to grow their businesses, and here at TM we are very much looking forward to watching her new business venture flourish.