TM looks at how Mineseeker Operations reclaimed over £125,000 in R&D taxes with the help of Wolverhampton-based tax specialist R&D Tax Claims. (Advertisement feature)

Mineseeker Operations, based at Wolverhampton Business Airport in Staffordshire, has developed technology that detects surface and sub-surface landmines and unexploded ordnance.

The two principal owners, chief executive officer Mike Kendrick and Mark Dorey, commercial director, were originally involved in a hot air balloon business in Telford, West Midlands, which they went on to develop into a successful global aerial advertising business using airships to film major sporting events around the world.

Mike Kendrick became interested in how aerial photographic imagery could be combined with ground penetrating radar for use in identifying where landmines were buried. After taking an airship to Kosovo on a successful fact finding mission, Mineseeker was born.

The system, which took several years to develop, enables identification of sub-surface objects, and can survey up to five square kilometres a day.

“According to UN research statistics, there are one hundred million landmines buried in 70 countries and it will take over 600 years to clear them, at an estimated cost of $50bn”, says Mr Dorey. “Incredibly, these statistics don’t include Iraq, Afghanistan or Libya, and there are approximately two million more laid every year.”

Mark Evans, managing director of R&D Tax Claims, recently celebrated hitting the £10 million mark in HMRC tax reclaims. “Mineseeker is a great example of a company that has combined its entrepreneurial skills with in-depth knowledge of its specialism to create a business with a global reach in an area of great need,” said Mark.

“This was a slightly unusual claim for us as Mineseeker has one product, whereas most companies have several. The difficulty lay in identifying the costs we could claim with HMRC, but we were very confident from the outset that Mineseeker had clearly carried out research and development.

Mineseeker is still in the start-up phase with low sales and high costs.

Mr Evans says this meant the claim submission had to be very clear in clearly indentifying and defining R&D costs as HMRC is very specific about which R&D costs can be reclaimed and which can’t.” We were forensic in our approach,” says Evans, “and the resulting claim of £125,854 over two years is one of our biggest to date. It’s a joy to assist a company whose ethos is firmly both humanitarian and environmental – in excess of 80 per cent of land designated as mined is in fact clear, and this land can be brought back into use quickly for the good of both the community and the country.”

“I was surprised but delighted that we could reclaim that amount of corporation tax”, said Mark Dorey. “We’d never heard of the scheme before. It’s great news from a cashflow point of view as we are continually reinvesting into the business and we will continue to reclaim through the scheme. 2013 is looking very good indeed.” 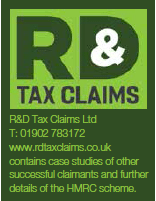