Which sectors are in most need of a digitally skilled workforce?

Manufacturing is second only to Information & Communication in the top ten sectors which most require job applicants to have specific digital skills - particularly those in relation to digital tools, programmes and software.

Nearly 70% of manufacturing firms said they require applicants to be equipped with “specific digital skills” as they build companies that must continue to be competitive in the era of Industry 4.0 – according to government-led job market research analysed by The Knowledge Academy (TKA).

TKA examined hundreds of thousands of employment adverts collated by the UK government to determine which sectors have the most and least need for a workforce with digital skillets.

Of the more than 1.3 million manufacturing roles examined, more than two-thirds of firms (69%) said they desired “specific digital competencies” from prospective applicants hoping to work in the industry. 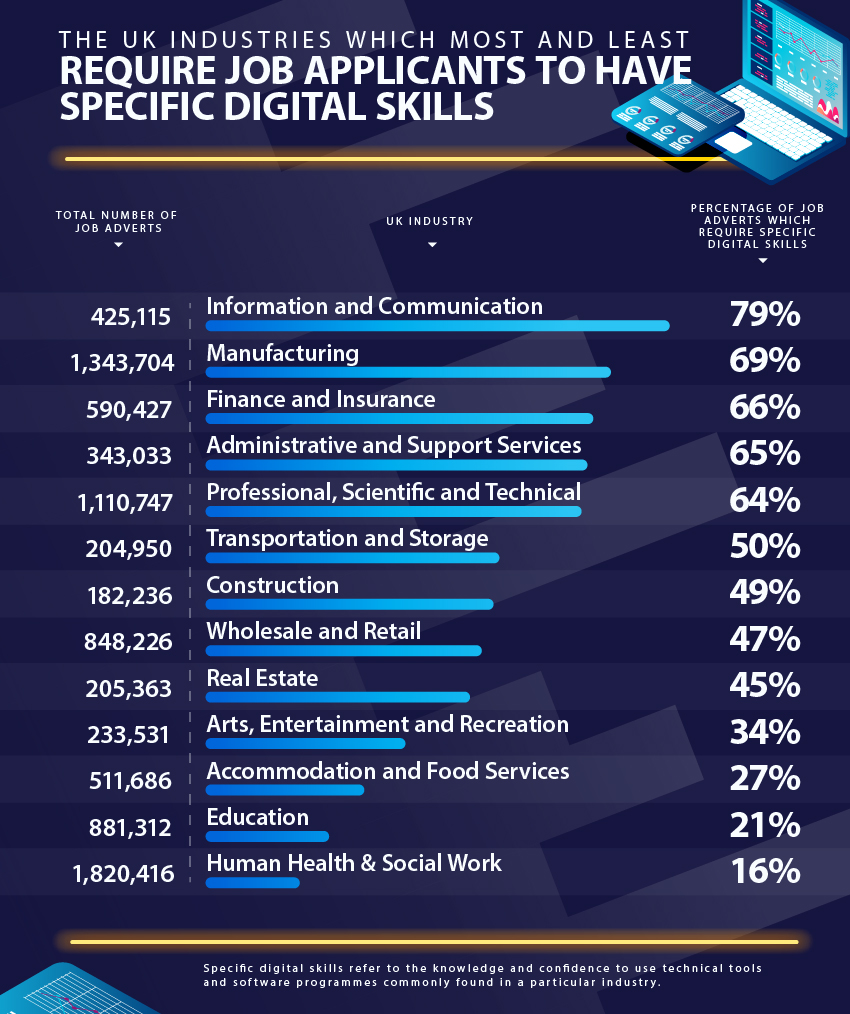 Infographic courtesy of  The Knowledge Academy

Nearly half (49%) of future roles in UK construction will also require people with digital competencies, according to more than 180,000 job ads examined.

While 79% of 425,000 information and communication jobs also need people proficient in technical tools and software programmes.

Half (50%) of 200,000 transportation and storage workers in the future should be digitally skilled too.

It was found that positions in human health and social work (16%) least need job hopefuls to have specific digital capabilities, which is surprising given the rapid growth of the UK health tech scene.

TKA surveyed 562 UK job-hunters, some of whom are considering roles in the manufacturing sector, to understand some of the perceived barriers to gaining employment.

As a result of the findings, TKA has issued a three-point plan to prospective employees looking to gain an edge on the competition and in light of the fact that “most industries have now been revolutionised by technology”.

Applicants are recommended to take an inventory of the required digital skills on the job specification of the role they are interested in. This provides a “focused approach” to what prospective employees should be aiming to learn.

It’s also suggested that applicants research using accredited courses, useful websites, books and podcasts to understand what digital skills are being sought, as they may change depending on sector.

Finally, it’s recommended that applicants schedule quality revision and study time to brush up on the materials they will need to know in the digital age – allowing for adequate downtime and space to think in between.