The Manufacturer sits down with Syed Ahmed, the founder of Savortex, the data-driven company behind one of the most energy efficient hand-dryers on the planet.

How exactly did Savortex get started?

The business was founded in 2006 in a little shed in Bedfordshire where I teamed up with a highly qualified motor specialist engineer. He invented what’s defined as the most eco-friendly, low energy, brushless motor technology, which forms the heart of our dryer.

We now run a very lean setup where we outsource certain functions of the business to suppliers to help encourage a local supply chain. We’re the only British eco hand dryer technology manufacturer, with Dyson now based in Malaysia.

Our subcontracted facility is based in Wiltshire and that’s the core part of our business. Our subcontracted service providing partner is also a major shareholder in Savortex, so we are working servitisation into our process.

Our subcontracted manufacturer is not only providing us with a built, tested product, it also comes with a service which is the long term feedback back into the business.

Despite the innovative, environmental changes you’ve made, it’s not so much the physical product that changes as much as how it is being utilised?

That’s right. Our first USP back in 2006 was to make sure the hand dryer was the most cost and energy efficient on the planet. Our second objective was to add the data element in.

The data element didn’t come in until four years later when I approached the Technology Strategy Board (now Innovate UK). 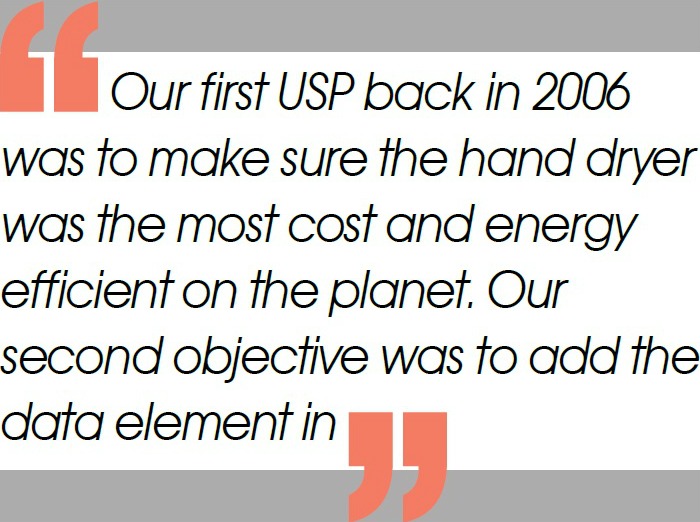 In buildings you have the most constant part being that they have floors. In each floor there are a number of washrooms. The most influential element in the building – the people – are going to that washroom two to three times a day. So that’s our opportunity to monitor behaviour and the heat map of a building.

What did you learn from this experience?

What we learned from a commercial point of view is that if we can show clients a heat map of their building, then they can use that to actually start turning certain washrooms off and certain floors off based on certain days based on occupancy.

What that data point allows is the transparency to see exactly how many hands you’re drying and how many people are going in and out of the washroom. If you’ve got that kind of data you can start making all sorts of intelligent decisions to help drive savings while improving resource efficiency.

What we’ve created is remote washroom maintenance in the cloud. The data is now showing all stakeholders, including cleaners and service providers, exactly what’s going on with the building.

Everything is monitored online, there are alerts sent to the cleaners, the cleaner cleans and then has to email back the alert to say the work has been done.

Have you actually begun to measure the benefits from some of your clients?

Basically what we’re encouraging is cross conversation and profit-boosting insights into your building. For example RBS now uses the data from our dryers to make savings of about £35,000,

2.7 tonnes of Co2, 14 tonnes of waste and 1.9 million paper towel sheets in about two and a half months of using this data.

That’s what they also stand to save throughout the rest of the year. This is the data that’s been reported back from our data dryers in one building in London in one year. If you then add on the resource efficiency savings which we are currently looking at to be around six – 10 per cent, because soon they won’t need the large teams of cleaners going around cleaning all of their washrooms.

Do you plan to take this model outside of washrooms?

The whole model around being an Internet of Things company is because we’re using the internet, data and the cloud to build in a servitization model in that we’re not just selling a product, but we’re selling a service.