With conversations having matured from merely what is servitization, to how can I adopt the concept, The Manufacturer and Microsoft explore servitization in the most practical of senses.

No one could argue that UK manufacturers aren’t facing tough conditions, and indeed have done for some time. The continuing uncertainty surrounding what will happen when Great Britain officially leaves the European Union and what the long-term effects such a move will have continue to dominate conversations, from boardrooms to water coolers.

The fluctuation such apprehension has had on currency has been significant for manufacturers, with the current weak pound proving to be a boon for both new and established exporters alike.

Yet the current optimism surrounding exports, something being realised by many businesses for only the first time, must be tempered; firstly, by the realisation that the pound won’t stay depressed indefinitely, and secondly, by any exporting gains made being negated by import losses, particularly of raw materials and component parts.

Setting ‘Brexit’ aside, the ongoing skills gap has risen to the fore once again, though arguably the issue has never truly gone away. The increasing proliferation of digital technology, coupled with data permeating every aspect of industry has seen an urgent need for data scientists, experienced people who not only understand data, but also want to have careers in industry and understand the problem areas.

This urgency has given rise to two important questions. If these people already exist, but operate in other sectors or are studying and have yet to decide on a final field to enter, how can they be tempted to industry? If they don’t already exist, what must happen to create a robust pipeline for the future?

Automation and robotics, data, the cloud, the (industrial) internet of things, analytics, business intelligence, and additive manufacturing (or 3D printing), all fall broadly under the umbrella of industry 4.0, or alternatively, the Fourth Industrial Revolution (4IR).

These advanced technologies are having a profound impact, fundamentally reshaping the industrial landscape so much so that it bears little resemblance to that of just a decade ago.

Yet amid this disruption and uncertainty, UK manufacturers are optimistic for the future, with The Manufacturer’s Annual Manufacturing Report 2016 recording the second-highest level of optimism in its almost decade-long history. The report also demonstrated a healthy level of investment in automation and technology across all sectors, with a large majority of respondents having undertaken an associated project in the past five years, primarily to improve business efficiency, cut cycle time and boost quality.

The trend was largely mirrored in The Manufacturer’s Annual Manufacturing Report 2017, bolstered by the fact that the large majority were either undertaking a move to Industry 4.0 (23%), or were planning to do so (62%).

Whenever an industry undergoes such widespread transformation, there will always be those who face such change with excitement and relish the new opportunities it presents. Conversely, there will also be those who shy away from the prospect, preferring to focus on business as usual, to endure rather than disrupt. Yet, choosing the latter option as a long-term business strategy has become increasingly imprudent, with start-ups and incumbents alike looking to leapfrog intransigent rivals.

Those truly opting for disruption and innovation aren’t doing it on merely a new product development perspective, rather something far more ambitious. The shift from a purely product-led, ‘make and sell’ business model is being progressively superseded as manufacturers increasingly adopt and embrace servitization – building long-lasting, entrenched customers relationships rooted in service propositions, offering an ongoing capability rather than a standalone product.

In times of uncertainty and squeezed margins, servitization offers a means to regulate ‘peak and trough’ revenue streams, fostering more predictable and secure cash flows. For example, a study by Aston Business School’s Advanced Services Group, a world-leading centre of excellence in research and practice on servitization, identified that manufacturers can create a sustained annual business growth of 5-10% by offering advanced services to new and existing customers.

Encouragingly, manufacturers’ awareness of servitization has grown significantly over the past 12 months, both in the use of the term itself and an understanding of what it represents. However, upon learning of the concept, the first questions to be answered are still; how does servitization apply to my business and, how can I adopt it? Neither have become any easier to answer as servitization represents something different for every business and sector; there is, as yet, no ‘silver bullet’ solution. 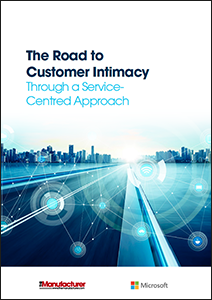 This article is taken from the recent white paper The Road to Customer Intimacy Through a Service-Centred Approach, based on research conducted by both The Manufacturer and Aston Business School’s Advanced Services Group, and the insights gained from an exclusive servitization roundtable event which brought together senior leaders from across UK manufacturing.

The full white paper discuss how servitization complements Industry 4.0 technologies, what impact adopting servitization will have on your people, mitigating the challenges assocaited with business transformation, and identifying where within your business your customer value is created.

If your business has already made the first step, or is considering embarking on its own servitization journey, this is vital reading for you and your business’ decision-makers to question your existing processes and ensure you get the most out of your transformation journey.