Posted on 8 Jun 2017 by The Manufacturer

Smart technologies are becoming increasingly ubiquitous in our day to day lives. From smartphones to smart homes, the dramatic increase in power and sophistication of technology is opening up new technological frontiers and promising endless possibilities for the development of many different industries, particularly manufacturing.

Below are just some of the smart technologies that are changing the way we approach manufacturing. 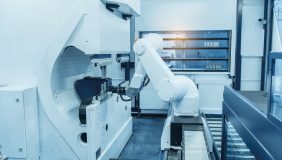 This is true of the increasing application of self-driving cars and automation is even making in-roads in the construction industry with examples such as the first drone-guided robot self-driving bulldozer trialled in Japan.

However, with the ever-increasing sophistication of artificial intelligence and machine learning, automation will soon come to mean something completely different, going beyond robots that can build and assemble by following a predefined sequence and ending with robots that can evaluate a task and react accordingly.

These automated robots of the future will be able to decide for themselves what process the object in front of them requires and adjust their behaviours to suit the situation, perhaps even eventually being able to diagnose and repair problems with various products.

The ideal smart factory, or as GE calls it: ‘Brilliant Factory’, will allow software to receive an order and automatically order production on new units, dispatch design requirements to designers should a new product be required, and use sensors linked to AI to spot defects and predict if machinery maintenance is required.

3D Printing allows the immediate creation of a physical object designed on a computer. The technology ranges in complexity from home kits that print with a single material to metamaterial equivalents used in industry that are capable of producing integrated circuits.

3D Printing has even been used in medicine to construct organs for use in transplant patients. The implications for manufacturing are huge and two-fold. Firstly, there are the possibilities opened up by the technology. Previously difficult to manufacture parts can now be obtained much more easily (although this will depend on the material it’s made from) and more of the manufacturing process than ever before can now be automated.

The industrial application of 3D printing, known as additive manufacturing, has begun to break through as a mainstream production process. According to a recent survey, a quarter of the respondents said that they already use additive manufacturing for production components, and a clear majority (85%) said they expected to do so within the next five years.

However, another big implication of the technology is that home manufacturing will become viable; people at home with affordable technology will be able to print out products from downloaded or purchased blueprints. With this capability in more and more homes, or local depots, manufacturers will have access to more distributed production but also increased competition.

Until now, cyber security has been a niche area of expertise, but this is rapidly changing as the devices and objects around us become increasingly connected, or networked. Cyber security has often been something of an afterthought for designers and manufacturers alike, but over the last few years, there have been a series of high-profile demonstrations of the consequences of ignoring cyber security including the hacking of hospital equipment and car software. In both cases, it was discovered that products were being designed with the bare minimum of cyber security if any at all.

Smart Technologies are definitely the future and many industries are now scrabbling to adapt to and innovate in this environment. All manufacturers must start paying attention to the current trends and adjust their business models, production techniques and even products accordingly.