Posted on 1 Sep 2020 by The Manufacturer

The South West, as many holiday visitors have had cause to discover, is a long peninsula – but this varied region has a vibrant manufacturing base that will be a crucial driver of growth for the national economy. James Smith reports.

By its very nature, England’s South West is both close to and far-removed from the rest of the country. This odd combination of geographic proximity and relative remoteness means increasingly little when set against a backdrop of international supply chains, but does highlight the difficulty in drawing quick conclusions about such a varied region stretching (according to the ONS) from Cornwall to Gloucestershire.

The region’s manufacturers have made the best out of an educated workforce, with local links to some of the country’s best manufacturing universities (Bristol, Bath, University of the West of England), and have established internationally-competitive manufacturing clusters in aerospace, defence, marine, nuclear and food and drink.

“Everybody thinks that this is tourism and cream teas and jam, but we have a thriving manufacturing sector focused on high precision engineering, around a vast variety of sectors, all very high skilled,” says Nick Golding, Managing Director at SWMAS, a regionally focused manufacturing consultancy that grew out of the much-missed government Manufacturing Advisory Service.

“Renishaw, EDF, Leonardo, Thales, Princess Yachts, Spirax-Sarco, Rolls-Royce and many more are based in the region.”

With around 12,000 manufacturers operating in the region, the sector contributes 11% to the South West’s economic output, above the national average. The Gross Value Added for manufacturing is twice as much as the contribution from tourism.

“Cornwall is full of resources and highly talented people,” says Ugo Massabo, the Italian born Managing Director of TiramisUGO. “Being based in Cornwall gives you motivation to challenge yourself and to reach the hidden and often, most beautiful parts of the county.

“The main difficulty for the supply chain in the South West is that the road and the traffic infrastructure does need further investment.”

Barny Butterfield, Managing Director, and (surely the best manufacturing job title ever) Chief Cidermaker of Sandford Orchards, based in neighbouring Devon, accepts that it can be a long way to attend a meeting, but that the location adds authenticity to the product (“It’s where the apples grow!”)

“Orcharding and farming skills are unrivalled in Devon – but its relatively small population means finding skilled staff is an ongoing challenge,” admits Butterfield.

“Cider has always been tied to geography, the shorter the distance from the orchard to the cider mill, the better for the environment, and the better condition the fruit will arrive.”

While food and drink is a major manufacturing sector, the region’s diverse and well developed industrial base has encouraged the government to invest in some interesting infrastructure in the region.

These include the National Composites Centre, along with the Offshore Renewable Energy Catapult and the Satellite Applications Catapult.

The regional authorities have expanded upon this central government support, with the announcement of the Digital Engineering Technology & Innovation (DETI) initiative. With £5m from the West of England Combined Authority (WECA), with matching funding from industry and HVM Catapult, the programme is expected to deliver at least £62m of added R&D value over five years.

DETI is a research, innovation and skills initiative to develop and accelerate digital engineering across multiple sectors for future generations of engineers and engineering products – and is extremely focused on quickly demonstrating the value of digital technology integrated into industry relevant production systems.

Key demonstrators that will be delivered in December 2020 include Artificial Intelligence (AI) in Manufacturing which will enable ‘right every time’ manufacturing, and a Virtual Reality (VR) interactive training solution in February 2021.

“While there’s always room for the region’s Local Enterprise Partnerships [LEPs] to do more, manufacturing is recognised as a key sector accounting for around 11% of the regional economy,” says Golding.

“There’s further support that could be made available, especially during tough times like the present because manufacturing creates high value jobs that are highly-skilled, and which provide people with long-term employment prospects.”

The highest concentration of manufacturing employment south of the Midlands? Plymouth, according to the number crunchers at the Centre for Cities, who put the figure at 12% of the working population, some 13,000 people.

When future career choice is heavily shaped by role models, having a high proportion of a city working in manufacturing becomes a virtuous cycle, encouraging the next generation of school leavers to aspire to a high quality, well-paid job in industry.

HM Naval Base Devonport, which refits submarines and surface ships, is the largest naval base in Western Europe, and the biggest engineering and manufacturing employer in Plymouth – but the local manufacturing network has more than 60 active members, and a high number of operations established by international manufacturers, according to Steve Gerry, Secretary of the Plymouth Manufacturers’ Group.

Something like two-thirds of Plymouth’s largest manufacturers are international businesses, including household names like Kawasaki, Olympus, Mars Wrigley, as well as a number of German, Spanish, and Chinese firms.

According to the ONS, 16% of Plymouth’s economy is based on manufacturing – twice the national average.

Building on the cluster effect of HMNB Devonport, the next two biggest manufacturers are defence supplier Babcock and the largest boat builder in the country, Princess Yachts.

The latter company, always focused on the luxury end of the marine business, has historically had a very strong order book – and despite the economic fall-out from COVID-19, has had a successful June.

“It really depends on which markets a manufacturer serves,” says Gerry. “If you are selling to aerospace, you are probably suffering; our high-tech manufacturers selling precision equipment into the aerospace sector don’t see aerospace turning around until the end of 2021.

“However, some of our members learned during the 2008-9 recession to diversify their markets and have benefitted from that.”

Gerry says that companies like Beckton Dickinson, which sell medical devices, have been critical suppliers and therefore extremely busy throughout the crisis.

Other companies like Rittal-CSM make racking for IT servers, and the growth of cloud-based services has kept them running at full capacity as they win business to supply all the server farms and data infrastructure on the West Coast of the US.

Bandvulc, a tyre company that supplies the logistics and supermarket lorry fleets, and which operates an innovative servitised business model where you pay for use rather than buying the tyre, has been running (excuse the pun) flat out to support the explosion in home deliveries.

Ready for a post-COVID world?

These are difficult times for all firms, with many anticipating a downturn in sales for at least six months. The priority is clearly to protect cashflow. However, it is also an improving landscape.

“With the closure of pubs, we weren’t sure if we would even be able to stay open at all. But we have been bowled over by the response from our customers to our online store. Sales have soared to 1,800% of levels last year – and the first things to sell were our cans,” reveals Butterfield. 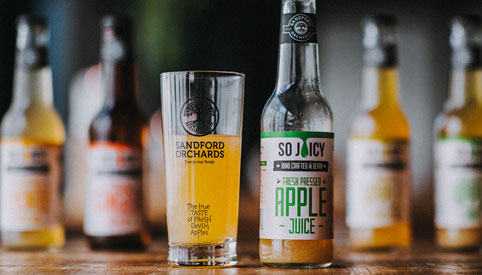 “We realised that we needed to invest in our own machine so that we could pack our own products and offer the service to other local drink producers.”

Sandford Orchards received advice and assistance from SWMAS, and their experience indicates that there remain plenty of growth opportunities for manufacturers who are willing and able to rethink their approach to market.

“Firms are doing an awful lot to try and improve the situation and there are green shoots coming through – and there is a drive for change, a necessity now to adopt new tech and change processes to get through this,” continues Golding.

“Hopefully over the next 18 months we may see a transformation in manufacturing that can potentially close the productivity gaps – we may have the potential to advance in 18 months what would have taken many years otherwise.”

Looking beyond COVID-19, as the world gets used to remote working, cloud-based collaboration and distributed teams, the tyranny of geography will weaken.

“With some of the changes and social norms being adopted by COVID-19 there is significant potential for that expertise to grow and be located here, particularly around the design and manufacturing aspects of the production process,” Golding notes.

“We’re starting to see leaders going direct to consumer and direct to market – this reduces their reliance on intermediary customers by creating new solutions, services, or routes to market.