Not before time, young people have a national voice and the ear of Government but how long will it be before everyone starts listening?

Time and again, when talking to bright, talented youngsters, I hear tales of academic snobbery – career advisers actively obstructing them from taking a vocational qualification and a career in industry. 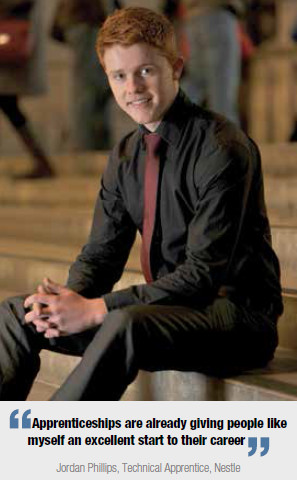 Many are being driven into higher education so schools can simply tick a box to say a pupil has gone to university – but it shouldn’t be about the school. It is about the young people and ensuring we have a highly skilled workforce in engineering and manufacturing now and in the longer term.

Of course industry needs the best graduates – far too many of those taking STEM subjects are lost to other sectors of the economy – but we cannot allow the poor advice to suppress the ambitions of our young people who can’t or don’t want to go to university.

We need a huge shift in emphasis to redress the balance and build a proper skills pipeline – where young people are inspired to follow a career path without incurring massive debt.

Youth unemployment is high yet companies report vacancies as difficult to fill – if ever there was an opportunity to bring together education and industry, to ensure we create a positive environment for learning while earning, it is now.

And it is not just our sector. The Chartered Institute of Personnel and Development (CIPD) has called on its members to deliver CV workshops and mock interviews as part of Inspiring the Future – an initiative set up by the Education and Employers Taskforce in 2012.

The campaign already encourages businesses to visit schools to deliver career talks, advising students on what educational or training paths they could pursue to work in those industries.

A report from the CIPD, Employers are from Mars, young people are from Venus, highlighted a lack of careers advice and guidance in schools as one of the core problems, adding that many young people were leaving education without an understanding of the world of business.

It is something the young people on the Industry Apprentice Council (IAC) have set as a challenge to overcome. 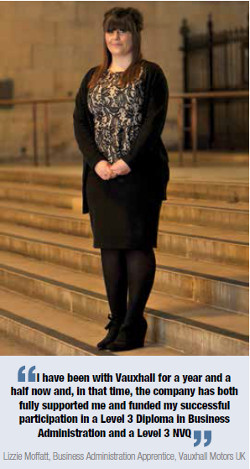 The IAC is made up of 14 apprentices from some of the UK’s biggest employers and aims to highlight the benefits of apprenticeships in order to help change perceptions and show they are a first class route into a highly skilled and fulfilling career.

Brought together by EAL (Excellence, Achievement and Learning Limited), the specialist awarding organisation for industry qualifications, and IMI Awards (The Institute of the Motor Industry), the leading awarding body for the retail motor industry, the apprentices are keen to get their voices heard. They have been less than complimentary about the advice they received.

One member said: “I didn’t want to go into higher education. I thought going into an apprenticeship I could earn a wage and learn a skill and that was a good option. But at school I didn’t get any information about apprenticeships and careers fairs seemed to be people ‘out on a jolly’ rather than finding out more about apprenticeships.”

It is a complaint I hear time and again – a damning indictment of the ignorance which still exists about the true value of apprenticeships.

The IAC has already been sharing its combined experiences, ideas and recommendations in Parliament – including speaking with Skills Minister Matthew Hancock at the All Party Parliamentary Apprenticeships Group.

Another IAC member, Jordan Phillips, who is a technical apprentice at Nestle in York, a young man on the front line, speaks for many.

He said: “A degree is often seen as the number one pathway into a fulfilling career. However, the IAC feels strongly that this is not the only pathway and that apprenticeships are already giving people like myself an excellent start to their career.

“We have a goal: changing the way schools, parents, employers and individuals see apprenticeships. We want to help improve careers advice in schools so that young people are aware of all the opportunities that are available. The IAC is rapidly becoming recognised as the voice of apprentices and I’m incredibly proud to be part of it.”

In a recent article in the Huffington Post – Lizzie Moffatt, a business administration apprentice at Vauxhall Motors UK, described how her teachers treated her when they found out her career intentions.

Lizzie said: “My teachers were aware that I wanted to undertake a degree through the Open University and noticeably offered me far less support and guidance than my fellow students, who wanted to go to conventional universities. I accepted that, but felt very aggrieved by the resentment and hostility that I was shown when I announced that I was leaving 6th form to begin an apprenticeship with Vauxhall motors.

“I have been with Vauxhall for a year and a half now and, in that time, the company has both fully supported me and funded my successful participation in a Level 3 Diploma in Business Administration and a Level 3 NVQ. I am now undertaking a degree in Business Management.

“I have a number of friends who have started their university degrees and they‘re finding it difficult to cope with the expense. In contrast, I have been able to buy myself a brand new car and pay for summer holidays, while still receiving the same level of higher education. Furthermore, and as equally important, is the fact that unlike my friends I am also gaining invaluable workplace experience.”

The words of the youngsters send a powerful message – we need to listen and support them and their peers in their efforts.

Semta believes in building engineering skills for the future. But we need your help to make it happen. We simply cannot allow poor careers advice to be continually served up if we are to make the most of the abundance of talent which undoubtedly exists in classrooms throughout the UK.