Tata Steel puts the pedal to the metal

Posted on 17 Apr 2015 by Victoria Fitzgerald

Dr Henrik Adam, chief commercial officer for Tata Steel Europe, reveals his strategy for development in a sector where demand is growing, but costs are rising to meet the challenge.

“The world continues to need increasing volumes of steel, which is by far the more widely used – and most recycled – industrial metal.

“Steel consumption globally will be well over 1.5bn tonnes in 2015,” says Dr Henrik Adam, chief commercial officer for Tata Steel Europe Ltd, testament to the fact that the future is bright for the UK steel industry despite a recession that  knocked the wind out of the sector’s sails in 2008.

“Last year European steel demand grew by about 2%, which means it remains around 25% below the 2007 pre-crisis peak (though that was an extraordinarily high peak). This was lower than earlier forecasts, as demand declined towards the end of the year. The picture was much the same in the UK market.

“Forecasters are predicting further growth this year, but only of a modest nature. However it is important to bear in mind global steel demand is growing more quickly and is about 30% higher than it was in 2007.”

And it’s this positivity that will help Tata navigate some potentially difficult times ahead. Energy costs in Europe are higher than in other key competitor regions. Europe’s lack of an energy supply solution and the increasing burden of emissions costs are a serious risk to the competitiveness of European steelmaking. 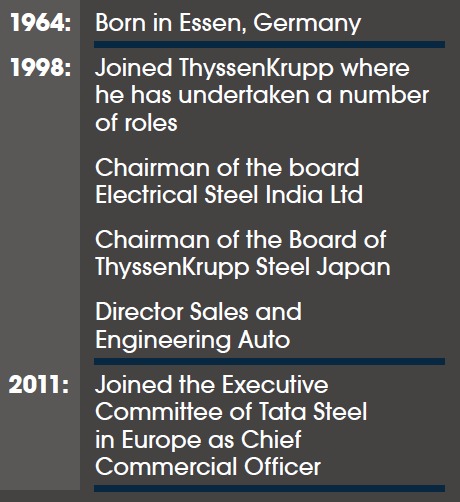 Adam explains: “We are investing in our European operations for the long term, improving their competitiveness despite the extremely challenging times we live in.

“In these circumstances, it’s vital that the European Commission and the UK Government acknowledge that their climate change targets are impossible for the steel industry to achieve without breakthrough technology.”

Adam is adamantly proud of what he calls the “tremendous amount” the steel industry has already done to reduce emissions “which have fallen 50% in recent decades”. However he’s gravely concerned that the best performers in the sector are limited as to what can be achieved with current technology.

As a solution to this, European steelmakers have joined together to work on certain potential new technologies. Adam elaborates: “One of the furthest progressed – called HIsarna – is being pioneered in a pilot facility at Tata Steel’s IJmuiden plant in the Netherlands.

“HIsarna has the potential to significantly improve the already high levels of resource efficiency in European steel making, including through reducing today’s steel industry emissions by at least a further 20%.

“But it will be hugely expensive to scale up and prove commercially on a single plant, never mind to roll out across the industry once proven – a process that would take decades. 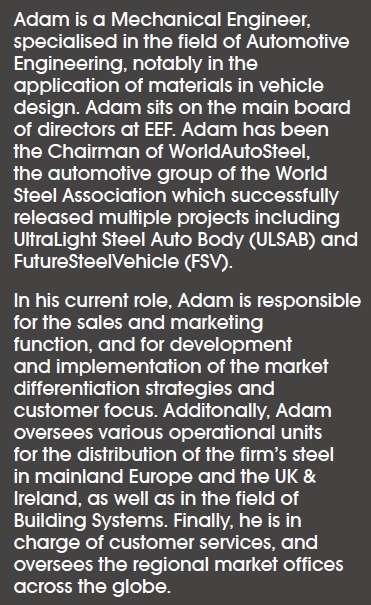 “The intention of the Commission to introduce stringent new reduction targets in a few years’ time therefore totally ignores technological reality. Attempts by the UK Government to push the green agenda risk being equally counterproductive when it comes to the steel industry.”

Adam also refers to steelmakers contending with these additional costs while trying to make the absolute most of the technological lead they undoubtedly enjoy in their services and products. Work is constantly needed to maintain that lead, as it represents their chief competitive edge.

The chief commercial officer is proud to say that: “Tata Steel brought 30 new products to market in 2014 and recently hit a milestone of having 100 new products in its portfolio following a revamp of its new product development programme a few years ago.”

So with the General Election fast approaching, Adam is hoping the next Government, as well as all EU Governments, will take measures to stimulate economic activity: “We’d like to see spending on infrastructure being stepped up as soon as possible across Europe and it’s notable that such efforts are beginning to be seen, including spending on transport,” he tells TM.

“We remain concerned about carbon and energy policy, which imposes penalties on emissions despite the fact that technologies to avoid the overwhelmingly vast majority of those emissions do not presently exist in steelmaking.

“Governments at both UK and EU levels have acknowledged the risk of deindustrialisation that current and proposed carbon taxes pose, but this isn’t being adequately reflected yet in changes to carbon legislation. 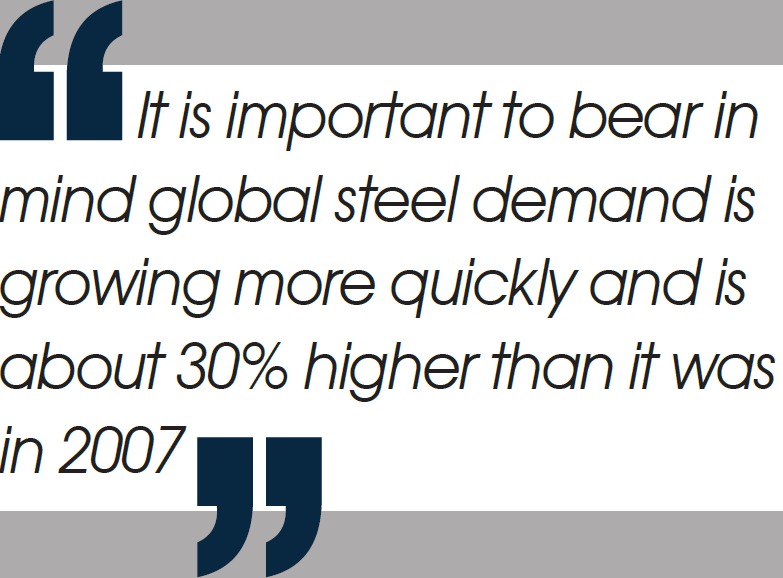 “In the UK we are also concerned about national dimensions of energy and climate change policy where we face additional burdens.”

Adam is confident the Government has begun to acknowledge these issues, but urges “a faster move from word to deed”. He would also like the business rates regime to be addressed.

He believes the system has become unfit for purpose because it penalises and de-incentivises industries’ investment by increasing rateable values following upgrades. He explains too that UK business rates can be 5 to 10 times higher than at equivalent industrial plants in mainland Europe.

“We also strongly support the efforts by the European Steel Association (Eurofer) to bring the attention of the Commission to bear on rising levels of unfairly traded steel imports,” he attests.

“Imports into the EU rose more than 20% in 2014. We hope and expect that the UK Government insists in Brussels that free trade is always upheld, but only so long as it is fair (unsubsidized and not at dumping prices that damage markets, and where dumping risks are addressed quickly and robustly).”

Adam refers to China and parts of Eastern Europe as examples, saying: “Exports from China, whose output nowadays is running at 50% of global levels, are having a dramatic effect on world markets, having soared to almost 100m tonnes last year. There are also sources nearer to home in Eastern Europe and the Near East which have large capacities and in some cases advantageous raw materials positions.”

Regardless of the barriers, there is much to look forward to, Adam maintains: “There’s a future for any steel producer in Europe that gets its strategy right. Our aim here is to continue to give our customers the competitive edge by working collaboratively with them to provide products, services and processes that will enable them to succeed in their own markets.

“As part of that approach, we also look to sell a greater proportion of premium products that few or no other steel producers provide. Examples of such products are ultra-high-strength steels to help make more fuel-efficient cars, and lighter, stronger steel for use in sustainable buildings.

“The European market is one of the most competitive in the world. To compete, we have to add value by offering truly innovative products and services that support our customers’ success. It’s also imperative that we continue to invest in and strengthen our assets – like the Llanwern decoiler – in order to meet customer needs in the UK and across Europe.”

TM visited Tata Steel in Llanwern, South Wales, to view its new £11m heavygauge decoiler, capable of supplying manufacturers with stronger steel to improve their own products. The machine is the most powerful in Europe and can process 270,000 tonnes of hot rolled coil a year.

The decoiler unwinds, flattens, then cuts the steel to size. Its strength enables it to produce ultra-flat sheet in thicknesses of up to 25mm, providing ample capability to meet the current as well as future requirements of customers in the construction and earth-moving equipment (CEME), and materials handling sectors.

Adam brims with enthusiasm at the benefits the new piece of kit will bring: “We can offer an improved product quality and supply manufacturers with stronger steel to improve their own.”

He adds that the investment is part of Tata’s overall strategy to better serve its customers by working with them to give them what they want and support them to achieve success in their own markets.

“Our customers take our product as large sheets, cut them into smaller components, before fabricating into assemblies. The flat sheets which the decoiler offers allow easier handling, and cutting and fabrication with improved appearance of the finished product.”

One of the great advantages, he maintains, is how future-proof the machine is, telling TM: “The decoiler is capable of processing the strengths and thicknesses that equipment makers are likely to need in the future. When even more complex, stronger steel products are developed, the decoiler will be able to process them.”

Adam also mentions the supply chain benefits brought by a direct rail link allowing steel coils not produced at the site to be brought directly to the line, enabling the dispatch of finished products to customers in the North of England and Scotland, something which he says makes “Tata Steel unique among steel service centres in the UK.”

The catalyst for the hefty investment was customer demand. He explains: “Here in Llanwern, the investment was made in response to customers in the construction equipment, engineering and material handling sectors.

“They are looking for sheet products with high levels of flatness allowing easier handling and fabrication with improved appearance of the finished product. We chose Llanwern due to its proximity to the hot mill where the product is manufactured and the direct rail links nationwide.”

The investment was not without its challenges according to Adam: “The greatest challenge has been to maintain high service levels to customers during a period when we are commissioning and ramping up a new line, which is significantly larger than its predecessors.

“Our ongoing challenge is to continue to work with and to support our customers, so that they can benefit from the superior product and service that we can now offer. We’re delighted to have the capacity and capability in place to support them in reaching their strategic objectives.”