The brains behind Vantage Power

“I was never that interested in cars and, to be honest, I’m still not. I can appreciate the design styling of a Ferrari, for example, but most cars don’t excite me.”

When Alex Schey, co-founder and CEO of Vantage Power, said that to me, I must admit it came as a bit of a shock.

Here was someone who has been involved in cars for almost a decade. He was part of the Imperial College London Racing Green Endurance (RGE) team, which drove 26,000km down the Pan-American Highway from North Alaska to the southern-most tip of Argentina in a road-legal, long-range electric supercar.

What really excites Schey, however, is what’s beneath the hood, the engineering and dynamic movement taking place below the surface. That’s a fitting analogy for Schey himself; someone who appears calm and still on the surface, yet gives the impression of a mind that never sleeps, constantly thinking and reviewing challenges and ideas.

The same could be said for Vantage Power’s other co-founder and CTO, Toby Schulz.

Both founders cite the excitement of combining new technology with hydrogen, the thrill of taking part in a race series, and the realisation that they could help bring about lasting change, as when their passion for building hybrid vehicles really came alive. 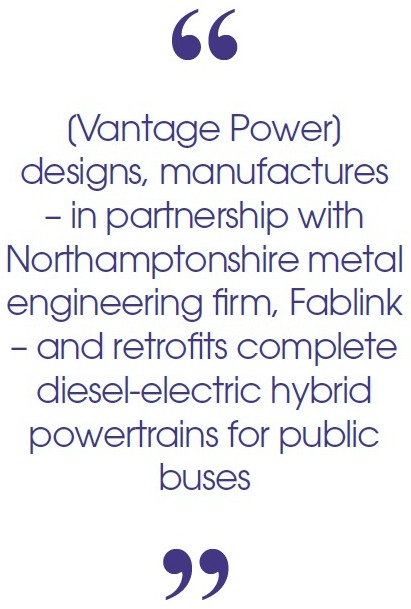 The retrofit nature of the system allows operators to reduce their fleet’s fuel consumption and CO2 emissions at a fraction of the cost of purchasing new hybrid buses.

By designing the entire hybrid system – everything between the fuel tank and the wheels –optimal performance of every component can be ensured, which in turn results in higher fuel economy, lower emissions and greater reliability than alternative systems.

When establishing their start-up, the biggest challenge the pair encountered was identifying exactly the right area to apply their know-how and technological experience that made commercial sense.

After almost 12 months of research, the perfect application was found to be in public transportation, double-decker buses to be specific.

“The vehicles are big, heavy and consume large amounts of fuel; typically operating 20-hours a day, 360 days a year. The ability to put in a fuel and emissions saving technology means you have larger gains over smaller vehicles,” said Schey.

“On top of that, in the UK specifically, double-decks are operating in the very intense urban environments where the emissions problem is worst and the fuel savings greater.”

The other major challenge was being able to fit everything within the existing engine bay cavity, vital from a retrofit perspective. The small team designed a battery that is three-times smaller in volume than its nearest market comparison, yet still offers the performance required and effectively manages the heat generated during operation.

“All of the software has also been designed and built in-house. We are as much a software company as we are a hardware company, one can’t live without the other,” added Schulz.

“We’ve created very innovative energy-management techniques that bind the drive train together in as efficient a way as possible. We have an incredible focus on software because we see it as the way these technologies will advance and improve in the future.”

I asked the pair whether in solving one problem (decreasing the world’s reliance on fossil fuels), they were in fact creating another (the creation of possibly vast numbers of batteries). I was reliably informed I was way off the mark.

“The batteries we use are non-lead based and highly recyclable, and there are a number of recycling programmes already in operation for our type of batteries,” Schulz said.

“As batteries improve and attain a higher energy density, they can actually be taken out of a vehicle and have a second life, less-demanding application, such as being used in stationary energy generation or storage.”

It’s all about being as agile and responsive as possible, Schey added. One of the primary reasons why the specialised manufacturing processes are outsourced is for Vantage Power to remain as nimble as possible and develop new technologies or designs.

You can read more about TM’s visit to Vantage Power here.

“Prototyping is something we are very keen to retain a strong hold over, giving ourselves the flexibility to continually push forward faster and not burdening ourselves with costly, space-occupying infrastructure which needs to be maintained,” he added.

“It wouldn’t allow us to quickly pivot to the next iteration or technology very easily because we would have a sizeable investment sunk in something decided 10 years ago. As much as possible, we want to reduce those factors which restrict us to a certain path.”