The building blocks of manufacturing excellence

Posted on 7 May 2015 by Malcolm Wheatley

Systems of intelligence are gaining a lot of traction. But before manufacturers can exploit them to their full, it’s important to put the right foundations in place, Microsoft’s Colin Masson tells IT Contributing Editor Malcolm Wheatley.

“That’s because they know that they can’t compete on economies of scale, and so must compete through other means. Building deeper and more loyal customer relationships, for instance, or by offering differentiated services alongside innovative products, or adopting approaches such as rapid prototyping, additive manufacturing and servitization.

“Or being more efficient, and using analytics for predictive maintenance, or the Internet of Things for remote monitoring.”

But despite this, small and mid-size manufacturers face a considerable challenge. In short, not only differentiating themselves from their larger competitors, but doing so profitably.

Moreover, he adds, they must also view their businesses through the lens of a very different set of metrics, supplementing inwards-looking measures such as Overall Equipment Effectiveness

(OEE) with outwards-looking measures such as the Net Promoter Score concept, which looks at how likely a business’s customers are to recommend it to other potential customers.

To the rescue: technology.

And in particular, technology in the form of “systems of intelligence” – in the shape of high-end analytics, mobile deployment, the cloud, and the various customer facing and employee-collaboration “social” tools that businesses are starting to use.

“Make no mistake,” insists Masson. “Together, these systems of intelligence are transformative, enabling manufacturers of all sizes to level the playing field in terms of how they compete with the world’s industrial giants.”

And the acronym SMAIC usefully sums up how these cutting-edge technologies differ from their yesteryear counterparts, he adds. “S for ‘social’ — because that’s how millennials work. M for ‘mobile’, because mobile technology is easier to adopt and leverage; A for ‘analytics’ that are baked in to products, rather than requiring people to become business analysts, I for the industrial ‘Internet of Things’, and C for ‘cloud’ — because the cloud enables manufacturers to deploy solutions more quickly.”

But if having SMAIC-based systems of intelligence is the endpoint, it’s not a journey with many shortcuts, warns Masson. “It’s vital to have the basics in place first,” he stresses. 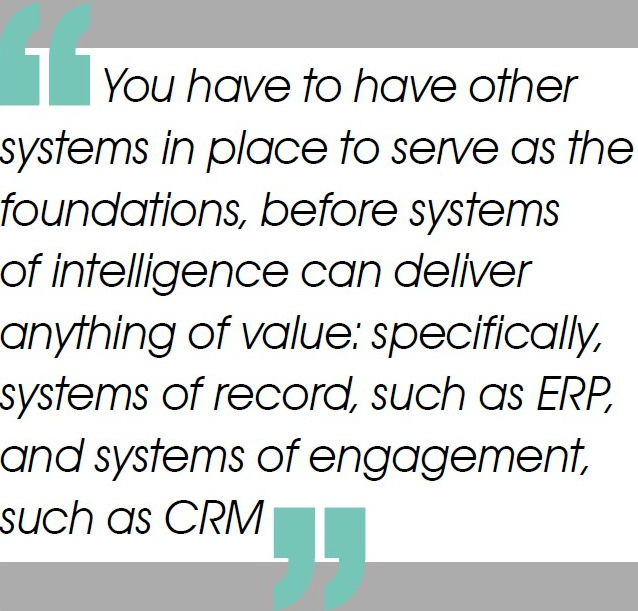 “You have to have other systems in place to serve as the foundations, before systems of intelligence can deliver anything of value: specifically, systems of record, such as ERP, and systems of engagement, such as CRM.”

In short, sums up Masson, if manufacturers don’t first of all have in place the basic systems necessary to make and keep customer promises – systems that control the transformation of inventories of raw material into high-quality manufactured products on predictable and achievable lead times – then any effort put into systems of intelligence runs the risk of being wasted.

“The basics, in the shape of ERP and CRM, aren’t very fashionable,” he concludes. “But you have to have them. And if your systems of record, systems of engagement, and systems of intelligence all come from the same vendor, then it will make the overall journey shorter and simpler.”