The future of emissions disclosure

In April businesses listed on the London Stock Exchange will officially be required to report their greenhouse gas emissions. Dexter Galvin, head of the Carbon Disclosure Project’s supply chain programme welcomes the move but looks to a day when more will also be required of suppliers.

Twenty or so years ago few organisations monitored or managed their greenhouse gas (GHG) emissions. These days it would be hard to find a major corporation that does not include details of its sustainability or environmental policy in its public communications. Soon it will be mandatory for them to do so in their director’s reports.

In June 2012 at the Rio + 20 Conference on Sustainable Development, the UK Government announced the introduction of regulation which will require businesses listed on the London Stock Exchange main markets to report GHG emissions data for their global operations in annual director’s reports from the start of the next financial year (April 2013).

The declaration was made as part of the Climate Change Act 2008, under which the secretary of state was obliged to legislate on the corporate disclosure of GHGs and related information in annual reports, or explain why not.

The majority of companies listed in the UK’s FTSE 350 index already report their carbon emissions through the Carbon Disclosure Project (CDP), the world’s largest natural capital disclosure system. These companies are responding to the 722 investors representing US$87 trillion in assets who request that company carbon emissions and strategies are reported through CDP. Last year, 64% of the FTSE 350 companies reporting through CDP also included GHG data in their financial reports.

By adding GHG emissions to the directors’ report, in which companies are legally required to inform their shareholders of their principal undertakings, the legislation should enable investors, analysts and commentators to incorporate climate risk into their analyses.

Around 1,100 companies will come under the new law’s remit, so there will be a significant jump in the number of companies positioned to capitalise on this opportunity and the related economic advantages, such as reduced energy consumption and operating costs.

However, many companies feel stretched by multiple requests for information. With climate change alone, UK companies are already subject to multiple reporting rules and practices related to carbon disclosure, such as the CRC regime, GRI and the investor requests through CDP.

To ease the reporting burden and maximise the benefits of company efforts, there should be policy coherence between all the different rules that require GHG emissions data.

Additionally, by covering a company’s direct operations only, the legislation touches just the tip of the iceberg: the vast majority of the leading manufacturer’s emissions lie beneath the surface, in increasingly globalised supply chains. 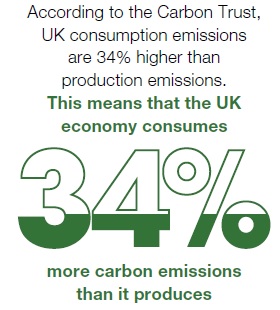 This richer reporting leads to better performance. Reducing risk and driving business value, newly released research from CDP based on information from 2,363 suppliers to 52 major global purchasing corporations with a combined spending power of almost US$1 trillion, reveals that companies communicating beyond mandatory reporting requirements are twice as likely to realise monetary savings from emissions reductions initiatives, and are twice as successful at raising investment for them.

In addition, those at the head of supply chains stand to benefit financially from urging suppliers to reduce their emissions. For example:

Carbon emissions pose a risk to manufacturers. Large purchasers are increasingly interested to understand the regulatory agenda of the countries that their key suppliers operate in.

If squeezed suppliers are faced with regulatory cost increases due to carbon or climate change legislation, the ensuing cost increase will invariably have to be absorbed by the end customer.

Then there’s the physical risk of climate change. The 2011 flooding in Thailand cost $45 billion; hurricane Sandy cost $50 billion. There is a general trend in increasing frequency and severity of extreme weather events around the world and over 70% of the companies analysed in CDP’s latest supply chain report now identify a current or future risk related to climate change that they believe could significantly affect business or revenue. The report, Global Risks 2013 from the World Economic Forum notes a similar trend.

The GHG reporting legislation is a welcome development, but it does not go far enough. Carbon and climate reporting from key suppliers will improve their performance while enabling supply chain managers to monitor and minimise risk in their supply base.

If UK plc is to prepare for a climate constrained world it needs to follow the leadership of major UK manufacturers and widen the scope of the regulation to include the supply chain.

Manufacturers which are complying with the EU Emissions Trading System or Climate Change Agreements already know how much energy they use. Those schemes also encourage industry to manage why and when they use energy to reduce their costs.

“However, formal reporting on a company’s wider carbon footprint is a step forward. Not a bureaucratic burden. Firstly, it is a clear statement that a company’s environmental impacts need recognition in the boardroom. Secondly, reporting on the environment is now business as usual; being a leader in 2013 means taking action.”

“As far as sustainability is concerned, we are on the start of the curve from compliance to commitment. Reporting emissions has been a focus for many years; the mechanics are well established, but for most it is yet to become a driving force for business.

“The proximity of organisations in the supply chain relative to the consumer, or how much influence they have over the consumer, can determine how actively they think about sustainability. Further upstream, companies may be focused on understanding where they should be positioning their activities, so they are both closer to the customer and operating with a more local supply base. But it’s cost with a conscience rather than, ‘sustainability; what does that mean for us?’

“The chemical sector is an example where all the big organisations have moved from compliance to commitment. Companies in this sector believe in ‘doing the right thing’. At the same time, they were driven to design their processes to reduce waste at source because the cost of compliance became so high. This may well happen elsewhere but it could be 10 years or more before it does.”