The future of steel in Britain

It’s a core industry, invented in the UK, but the story is one of decline and contraction. As the government starts talking industrial strategy and Brexit nears, how can we create a viable and profitable steel-producing sector? Malcolm Wheatley examines the challenges, options and opportunities.

In 1971, the UK’s steel industry directly employed 320,000 people. Today, that figure is around 18,000. Put another way, for every job that still exists, almost 18 have vanished. The decline, of course, is long-standing.

Thatcher-appointee Sir Ian MacGregor, for instance, parachuted into the then-nationalised British Steel Corporation in 1980, took a workforce of 166,000 down to 71,000 in just three years.

That is the picture that serves as the backdrop to Steel 2020: Forging a future for the British steel industry, a report published by the All-Party Parliamentary Group on Steel and Metal-related Industries in January, and describing what it calls ‘an existential crisis’.

The UK steel industry, it argues, ‘has reached a fork in the road’. With the closure of the Redcar steel works on Teesside, the ongoing challenges faced by Tata Steel in its operations around the UK – but particularly in Port Talbot, and the collapse of the Caparo steel business in 2015, the future of an industry in crisis is open to question.

Old names have vanished, and new names – such as Tata Steel, Liberty, and Thai-based Sahaviriya Steel Industries – have emerged, and sometimes disappeared again. And concessions once thought inconceivable have been secured from a newly-realistic workforce.

In February, for instance, Tata workers voted through a change to their pension scheme that gave them less generous pensions, but which secured investment and jobs at the firm.

In short, the central thrust of Steel 2020 is clear. Jobs, communities, and downstream manufacturing businesses all depend on a healthy UK steel industry. And after a half-century march to the edge of the abyss, what could to be done to save the industry from implosion?

And when considering this question, the UK’s impending Brexit simply compounds what was always going to be a challenge. UK Steel – the steel industry’s trade association – points out that 70% of the industry’s exports go to the rest of the European Union, therefore the problems raised by the loss of tariff-free access to these markets are obvious.

That many of those who live and work in the very communities where the UK steel industry is based turned out in large numbers to vote for Brexit is an irony that everybody tiptoes around.

And the industry’s dilemma is rich in other ironies, too. As Steel 2020 points out, high energy costs, the European Union’s Emission Trading Scheme, and various environmental initiatives have their roots in European politics, and undoubtedly represent a major challenge to the industry.

Yet on average, points out Steel 2020, UK electric arc steel producers – the industry’s most efficient – pay 50% more for their electricity than their German counterparts, a differential of £17 per megawatt-hour. Should UK steel producers have access to the same energy tariffs available to German producers, stresses the report, they would be 70% more profitable.

In the case of the rolling mill, says Original Steel Services chairman Chris Hutton-Penman, some 70% of its raw material comes from Arcelor-Mittal’s modern steel plant in Hamburg, while the forging operation sources on the open market, mainly from western Europe, with UK-sourced steel comprising less than 20% of steel purchases.

“In an ideal world, we would like to source more steel from the UK – especially with what has happened to the pound since the Brexit referendum,” he explains. “But the sad fact is that we can’t buy the steel we need at a price that enables us to compete. Partly, it’s a price issue, and partly it’s due to the particular steel specifications involved.”

Such stories are neither new nor particularly unique, of course. Steel is far from a homogenous commodity, with a wide range of specifications and properties, depending on application. Carbon steels, alloy steels, stainless steels, tool steels – chemically, these can be very different, with an enormously varied range of end uses.

Inevitably, it makes sense for steel manufacturers and steel manufacturing operations to focus on particular specifications, especially when steel scrap is a raw material.

Consequently, while UK manufacturing industry’s demand for steel last year exceeded UK-sourced supply by around 3m tonnes, the solution to the UK steel industry’s difficulties doesn’t lie in some simple magic wand, such as encouraging steel manufacturers to produce more of a given grade, says Dominic King, head of policy and representation at industry body UK Steel.

“It is not the role of government to steer individual steel companies to shape their production to particular markets – construction steel, say, or very high-grade advanced steel to meet aerospace requirements,” he stresses. “Companies must respond to those requirements themselves.”

The search for solutions

Yet the fact remains that in forming those responses, UK steel producers do so within the constraints of their existing commercial and operating environments, and the diktats that these impose. Talk to industry figures – whether UK Steel, companies such as Tata Steel or Original Steel Services, the Steel Council, or politicians – and a familiar litany of issues and remedies emerge.

Moreover – and this is surely good news – there is a great deal of unanimity between the various parties’ list of issues and remedies. From last July’s UK Steel manifesto, Securing the future of the British steel industry, to Steel 2020, to the industry’s Budget Submission to Chancellor Philip Hammond, and to conversations with industry figures, the same messages keep cropping up.

Problems include: high energy costs, especially in comparison to Europe. The impact of the EU Emissions Trading System, which, as drafted, allegedly disadvantages UK producers. Insufficient purchasing of UK-produced steel by public sector buyers. Business rates, where an old-fashioned system is hitting large sites hard. Steel ‘dumping’, by countries such as China. Support for R&D, a skills gap, and – most recently – how the Brexit negotiations leave the industry.

On the one hand, as Steel 2020 points out, Brexit could provide the industry with an opportunity to deal with Chinese dumping through punitive tariffs, given the political will.

The post-referendum fall in the value of sterling has already helped, by making UK exports 15% cheaper, and Chinese steel 15% more expensive. But, as Steel 2020 emphasises, there are negatives, and until the negotiations (and any subsequent trade deal) are concluded, the position regarding tariffs on trade in steel between Europe and an independent UK is very unclear.

And the potential for collateral damage is high. As Original Steel Services’ chairman, Chris Hutton-Penman points out, of the 70% of European-sourced steel feeding the company’s rolling mill, about 65% of it promptly returns to Europe in the form of exports.

Clearly, tariffs slapped on steel imported from Europe, and then imposed again – this time by Europe – have the potential to do a lot of harm.

“The entire steel industry is making urgent representations to government,” he stresses. “But I don’t think that anyone in government has grasped the fact that it’s not possible to be a thriving innovative manufacturing economy without a thriving and successful steel industry.”

Quite the reverse, in fact, as a document drawn up by officials at the Department for Exiting the EU makes clear. Dividing the UK’s major industrial sectors into high, medium, and low-priority brackets, it seems that steel was dumped firmly in the low-priority sector – far behind pharmaceuticals, aerospace, food and drink, and even agriculture.

Leaked to The Times newspaper in mid- February, it promptly caused a major furore, with steel industry observers queuing up to express their dismay and anger. Anna Turley, Labour MP for Redcar – where Sahaviriya Steel Industries closed its short-lived steelworks investment in 2015 – told the Financial Times that the classification was “outrageous”, and was proof that the industry was being side-lined.

Governments, of course, rarely comment on leaks, and the document in question was already three-months old. No one knows, in short, if it will form the basis for actual negotiations once they get underway. But the fact that it existed at all, say observers, points up the fact that the government once again seems to be in the business – 1970s style – of picking winners and losers.

And this, says Jonathan Dupont, research fellow at think tank Policy Exchange, rarely works. The high point of British industrial policy was in the 1980s, he says – with a further brief renaissance in the late-2000s, under business minister Peter Mandelson.

Even so, the state of the UK’s steel industry is so parlous that many observers wonder if a more proactive industrial strategy for steel isn’t warranted. Speaking exclusively to The Manufacturer, Tom Blenkinsop, MP for Middlesbrough South and East Cleveland, and chair of the All Party Parliamentary Group on Steel that published Steel 2020, criticised government inaction.

“There must be an industrial strategy for steel – especially in terms of an energy framework for the industry – in the same way that there are strategies for other sectors and industries,” he urges.

“Under Peter Mandelson there was progress, but under the coalition government, nothing happened for seven years. Now, at least, there is more of a sense that something needs to be done.”

Blenkinsop is forthright, too, about government inflexibility. Just £30m would have enabled Redcar to be mothballed in a controlled manner, he points out, enabling it to be restarted rather than closed down. Representations were made – but nothing happened, charges Blenkinsop, and a long proud history of steelmaking came to an end.

That said, green shoots do lurk amid the gloom. Several producers – Liberty, for instance – are promoting the potential of high-quality ‘green steel’, in which scrap steel is re-melted in electric arc furnaces in processes tuned to remove the high levels of copper and nitrogen that are typically present in scrap.

“It’s technically feasible – we just need to scale-up laboratory technology into a working production technology,” says Chris McDonald, chief executive of the Materials Processing Institute, and a contributor of oral evidence to the Steel 2020 report.

“And I’m incredibly optimistic that it will be possible to do this. But the key to it is energy prices: the whole concept is based on the UK steel industry playing on a level playing field, in terms of energy prices.”

And here too there is potentially good news – even without an industrial strategy for the industry, or government-backed initiative addressing the industry’s energy price imbalance with Europe.

“The cheapest energy for an industry is the energy that it doesn’t actually use,” says Ulrika Wising, head of the sustainable energy use section at specialist global energy consultants DNV GL.

“From our work with the steel industry, there’s the potential to reduce energy consumption by as much as 15% over five years, chiefly through incremental improvements, basic housekeeping, and small-scale investments.

“What’s more, the industry could look at engaging more actively in the energy markets, not just through load balancing, but also frequency response – turning off electric arc furnaces for 15 minutes, say, at periods of high demand. This wouldn’t impact production very much, and could see firms earn significant sums from the National Grid.”

Radical stuff, maybe – especially for an industry used to thinking of itself as a top-tier economic powerhouse. But, as Steel 2020 points out, times change, and former glories fade.

And yet, as Britain faces up to life outside the European Union, a vibrant and efficient steel industry is the bedrock on which the prosperity and competitiveness of many other industries rests. As the 2019 deadline for exiting the European Union nears, the time for action has surely come. 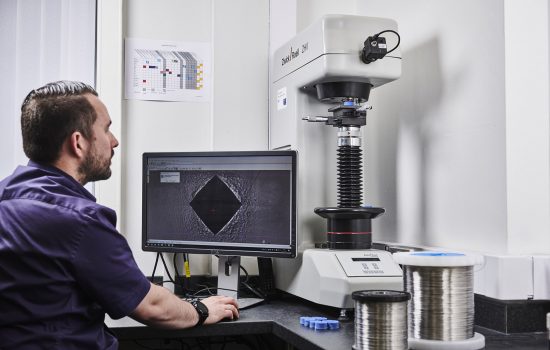