The shortlist for the UK manufacturing industry’s most coveted awards has been revealed. 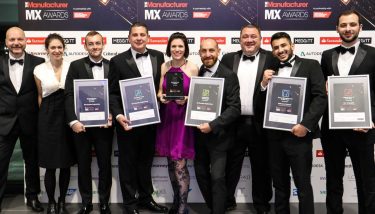 Companies including Accolade Wines, BMW and Jaguar Land Rover are among those that have been shortlisted across 10 categories, with one of them going on to be judged to be the highly coveted ‘Manufacturer of the Year’ 2018.

The winners were announced at a  glittering black tie gala dinner on 15 November at the Exhibition Centre Liverpool.

Click here to view all the winners on the night, including a special Lifetime Achievement award.

Shortlisted companies faced a rigorous second round judging process. Eight of this year’s categories had site visits from the judging panel throughout September, while the remaining categories were judged on a dedicated day in September where they presented to a panel of experts.

The Manufacturer MX Awards are delivered by The Manufacturer and the Institution of Mechanical Engineers (IMechE). The annual programme is universally acknowledged as the gold standard for bench-marking performance across a range of manufacturing categories, among companies large and small. They involve a detailed investigation of each entrant’s citation by groups of judges, who visit each factory in turn to inspect processes, and interview management and staff.

Nick Peters, Editorial Director of The Manufacturer, said, “There are dozens of awards programmes in the manufacturing sector, but The Manufacturer MX Awards stands head and shoulders above them all. And that is why companies such as McLaren Automotive are so eager to take part, because they know they are being tested in a way no other programme can offer.

“It’s demanding, but companies embrace it because, perhaps for the first time, they are being bench-marked against the best.

“So, many congratulations to all the companies named in this year’s shortlist. We look forward to meeting you on the judging tour in September and at the gala awards ceremony in Liverpool in November. May the best companies win!”

At the 2017 The Manufacturer MX Awards, McLaren Automotive was crowned ‘Manufacturer of the Year’, on top of winning the ‘Innovation & Design’ and ‘Smart Factory’ categories.

McLaren’s operations director, Alan Foster, told The Manufacturer recently: “Nothing in life that is good, is easy. By involving the team in the judging, we took responsibility for reinforcing the credibility of the awards, as evidenced by the scale of last year’s event. These are ‘real’ awards – being judged and recognised by your peers is one of the strongest reinforcements anyone can receive.”

“Manufacturing is one of the major drivers of our economy and in order to remain so, the sector will need to adapt to a fast-changing technological landscape. Companies that nominate themselves for The Manufacturer MX Awards benefit from free benchmarking and professional advice based on an audit of their business.

“This assists them to drive continual improvement to enable them to thrive in competitive markets.”

Paul Brooks, UK Head of Manufacturing, Santander Corporate & Commercial, said: “Our commitment to UK manufacturing and the wider sector remains strong in 2018. Once again, we’re proud to be supporting these tremendous awards.

“The success of the manufacturing industry is fundamentally important to the UK economy and it’s incredibly rewarding to see such diversity and innovation in those companies who have made the shortlist. We wish them all good luck and look forward to celebrating with them in November at the awards.”

It is made up of a series of interlocking events: