Do HS2, Crossrail and the Northern Powerhouse demonstrate that the UK is still a topnotch rail country? The investment is there and the work is ongoing, but there are hurdles in the way of building a 21st Century network. Ruari McCallion takes a journey.

There is good news and bad news about the rail sector in the UK.

Beyond a shadow of a doubt, the announcement and undertaking of a series of major rail projects including Crossrail, HS2 and the Northern Powerhouse, are clear and unequivocal indicators of a “golden age” of rail investment, and a huge boost to the manufacturing and supply industry.

Other projects, such as the proposed electrification of the Midland Mainline from St Pancras to Leeds, the Transpennine route from Leeds to Manchester, and the Great Western line from London to Bristol and South Wales, further emphasise good intentions.

The total cost of £38.5bn over five years is a huge amount of money by any standards; it is the biggest transport infrastructure package ever proposed in this country.

However, there are some hurdles along the way. The Great Western electrification has no start date and both the Midland Mainline and Transpennine projects have been “paused”.

The Northern Powerhouse’s timetable has slipped a bit and is talked of in some quarters as Transport for the North – TFN, for short, which is dangerously close to Jimmy Young’s old sign off phrase: TTFN, or “ta-ta for now”.

The existing rail projects are heading to exceed the £38.5bn budget laid down in CP5 – Control Period 5, the strategic plan that covers the period April 2014 – March 2019 – and some projects are, as a result, being delayed. 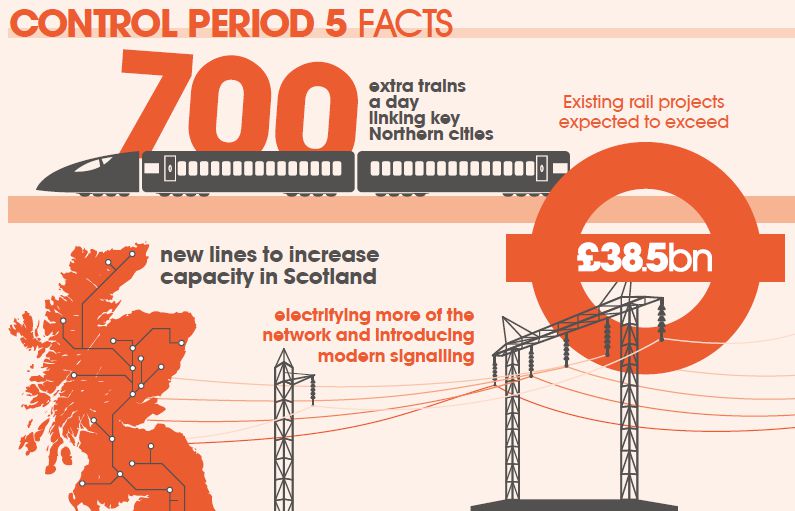 There is the unavoidable reality of the state of the country’s public finances; at the time HS2 and TFN were announced, it was questionable whether we could actually afford them at all.

But the stated objective of revitalisation of the economy outside of London is absolutely dependent on improved transport infrastructure in the regions – it will stimulate growth and go some way to achieving a geographical, as well as sector, rebalancing of the economy.

Even if it takes 60 years to revitalise the railways, as has been claimed in some quarters, it still must be done.

The UK is the sole major economy in the world that is dominated by only one major city. France has Paris, Marseilles and others towards the Rhine. Germany has Berlin; Frankfurt; Munich; Cologne, and so on. Italy has Milan and Turin. Japan has a number of major industrial and commercial cities. Even The Netherlands has more than one major economic hub: Amsterdam; Rotterdam; Eindhoven, and Aachen.

The idea of TFN is that it will enable the cities of Liverpool, Manchester and Leeds, along with Hull, to feed off and stimulate each other’s strengths and resources.

Objectives laid out in CP5 include: an extra 700 trains a day linking key Northern cities; a 20% increase in available seats on peak commuter services in London and the South-East; new lines to increase capacity in Scotland; electrifying more of the network, and introducing modern signalling.

Clearly, the political will is there and the money is being found, one way or another, even if there are going to be some delays in the short to medium term. But what else stands in the way of modernising the country’s railways? Why have key projects been “paused” or delayed?

Capacity to deliver, in short. Transport Secretary Patrick McLoughlin in a speech to the Commons on June 24, overtly criticised Network Rail’s handling of the five-year, £38bn investment plan and said there was “no excuse” for the delays.

“Electrification is difficult. The UK supply chain for complex signal work needs to be stronger. Construction rates have been slow. It has taken longer to obtain planning consent from some local authorities. But that is no excuse. All of these problems could have been foreseen by Network Rail.”

That costs were found to have risen as they got more specific almost goes without saying; it always seems to be the case with the UK’s major infrastructure projects.

As Pete Waterman observed, the country’s regulatory framework seems to make our railways the most expensive in the world.

It was to be hoped that laying out a clear strategy for the next five years and even beyond would have helped to “beef up” the supply chain, but it does not yet appear to be the case.

The established practices of “famine or feast” when it comes to tenders and orders remains in place.

“If you’re an SME you can’t cope with it; if the tenders stop, you’re in trouble. If you have 40 employees, you can’t keep them going – and the banks haven’t been helping. A few years ago, Bombardier actually stepped in and paid suppliers’ bills because the banks wouldn’t support them,” Waterman maintained.

So does this mean that the skills necessary to run the railways are being “hollowed out”? Skilled labour may be in short supply, but if companies could be confident that they were going to get the work, they will invest and they will build, he believes.

But what will they be building on? Derby has been through a crisis that has seen several companies disappear and factories close. Is the future of the UK rail industry to be repair and maintenance of equipment built elsewhere?

Waterman has more confidence than that. “In some areas we lead the world,” he said. “Braking, for example – all High Speed Trains, everywhere in the world, use British brakes. Our emissions technology is world-class. We have some excellent ideas coming out of Crossrail – we are still very innovative but we are not very good at sustaining long projects.”

There are significant issues with the physical infrastructure that will require major work along the way. In the North of England, at Warrington, a Victorian-era two-bore tunnel will probably have to be completely replaced.

The Severn Tunnel is not big enough to allow overhead power systems – so does electrification stop at Bristol? Where does that leave the development of transport in Wales?

At the same time as the country faces problems that are stopping projects dead in their tracks or raising costs and problems that could and should be foreseen, according to the Transport Secretary, the UK still has resources that can overcome pretty much anything.

As well as leading the world in braking technology, the UK’s emissions technology is also worldclass. The technology and techniques developed during the Crossrail project are also world-leading, from tunneling to signalling.

The challenge is to put them together – and to ensure that the structure of project commissioning means that companies will be encouraged to invest, and, crucially, that employees will remain in the rail industry and their skills will not be lost to nuclear, marine, automotive or other sectors.