Posted on 4 Feb 2022 by The Manufacturer

At Digital Manufacturing Week 2021, The Manufacturer hosted the annual TMMX Awards where Catríona Booth won the Young Manufacturer of the Year. Here, Lanna Deamer, caught up with her to find out more about her career, what it’s like to be a woman in manufacturing, and what it meant to win.

How did you get into the manufacturing industry?

CB: The first introduction I had to engineering and manufacturing was at secondary school. During our technology class, we were asked to make a litter picker. All we were given was a cereal box, some pins and an elastic band.

We were given complete autonomy in its creation, and in understanding the process of how it went together and how it would be used. It was the first time I’d built something from scratch, and this gave me a real sense of pride and achievement. This first introduction really sparked a passion for learning how things work, which led me to my engineering degree and then a role in manufacturing.

I studied mechanical engineering at university because there wasn’t a specific manufacturing degree at the time. Within my degree I spent a year’s work experience at Caterpillar, a manufacturer of construction and mining equipment, where I did six months in facility work and then six months in new production introduction.

This gave me a really broad exposure to the different elements of their manufacturing departments. Shortly after, I went back to finish my degree and then entered a graduate programme at Jaguar Land Rover – again in the manufacturing department – more specifically in new product introduction. I worked for Jaguar Land Rover for six years but have recently started a new role with Thales.

What advice would you give to someone entering the TMMX awards?

It’s so important to be confident. At the time of applying I was pregnant, and I remember feeling like superwoman – I really felt like I could do anything. Whenever I reviewed my application, I’d be sat there reading it thinking, ‘who is this confident lady?’

And this reflection has always stayed with me because after several re-reads, I wasn’t feeling the same confidence that I did at the time of applying. However, it really highlighted that confidence is always there, it’s just a matter of tapping into it because, of course, it’s not easy to talk about how good you think you are. I can’t stress enough how important it is to be confident in your skills and abilities.

What did it mean to you to win?

As cheesy as it sounds, it meant the absolute world. To be recognised by that peer group for a national industry award, just gave me the confidence I needed and forced me to believe in myself the way others do.

My mentor, Leigh Smith, New Model Programmes Director at Chery Jaguar Land Rover, is someone who I’d really like to give a special mention to, as he’s always pushed, stretched, and challenged me to grow. He is actually the one who encouraged me to apply and put myself forward for the award, so it just shows what a positive impact he’s had on my personal development. 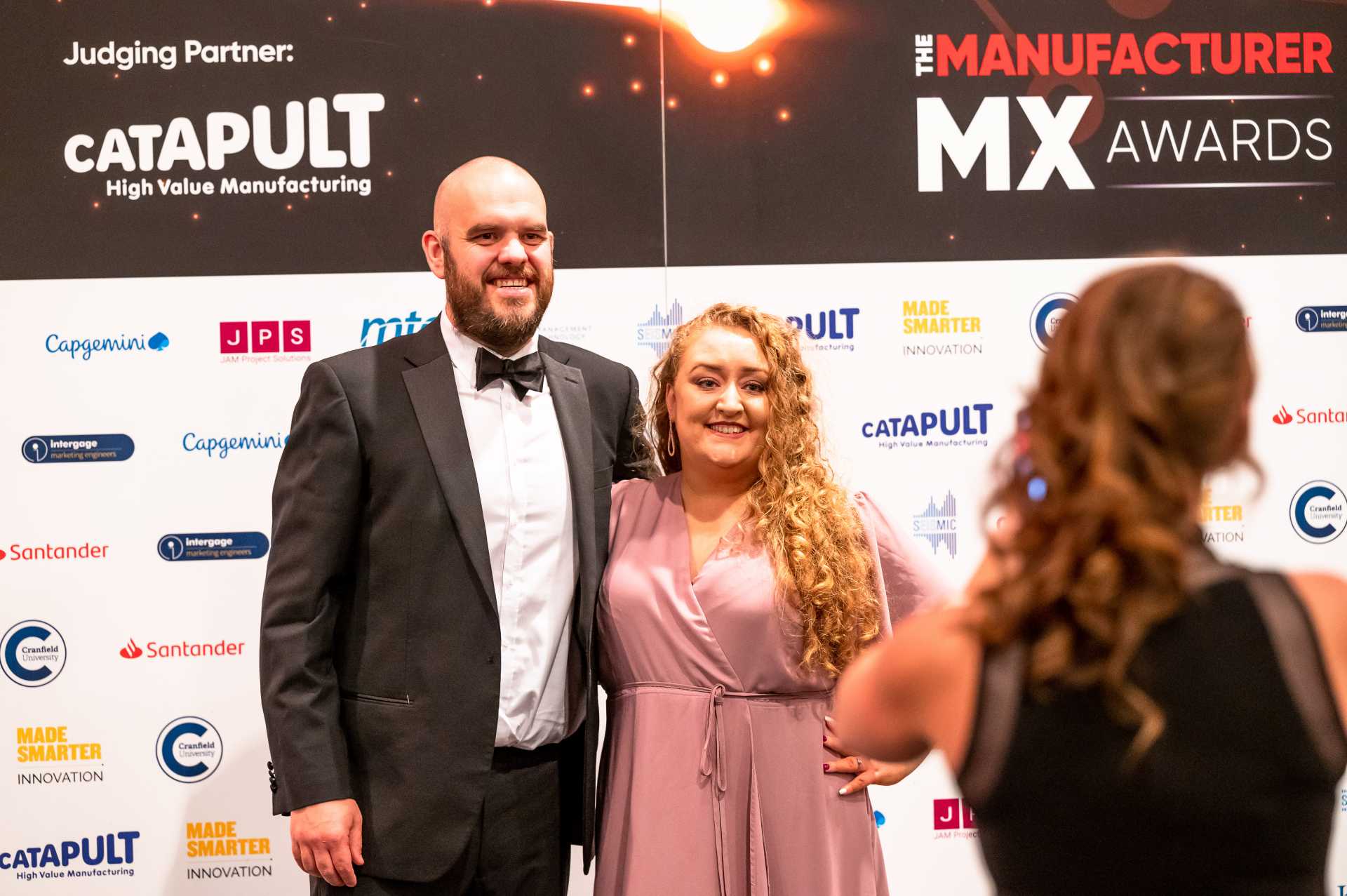 How can we get more young people into the manufacturing sector?

We need to get more manufacturing professionals into schools to help young people engage in engineering and manufacturing from a young age. This was key for me in my career, as there was a workshop at school which enabled me to get involved and introduced me to the whole idea that manufacturing could be a future career.

Doing workshops in schools, and within the local community to promote manufacturing, should be a standard part of everyone’s continuous professional development. I think we’d reach a lot more children and they’d have more awareness around manufacturing as a career.

I’d love to see the industry make it a priority to engage with young people, support them as much as possible and make young people excited about manufacturing. Kids are influenced by what they see and are exposed to, so if you ask them what they want to be when they grow up, they often pick jobs which they are surrounded by. This is why it’s so important for kids to start meeting engineers and manufacturing professionals.

What advice would you give to young people entering the manufacturing sector?

Ask LOTS of questions. Everyone says there’s no such thing as a stupid question, but a lot of people still hold back. By asking a question (even one that you think is simple), you will help give clarity to the whole team, and it’ll most likely take you down a route that’s more insightful. For young women in particular, it’s really important to be confident and to be heard.

At the start of my career, I was very aware of the fact that sometimes I’d be the only woman in the room. There were occasions where I’d take a step back and allow more dominant, louder voices to take over. However, the best thing I ever did was to stand up and give myself a voice. That’s not to say you need to be the loudest, oldest, most experienced or most senior person in the room; it’s about making sure that what you’re saying is being listened to.

It doesn’t even have to be an answer to something, it can just be about being inquisitive, changing the direction of the conversation or seeking clarification. A confident woman can hold a room very well, and often that’s a platform within itself.

Manufacturing is going to need a whole new skillset in terms of digital skills; is this a challenge to manufacturers or an opportunity?

I think it can only be looked at as an opportunity – the payback is tenfold once companies are able to engage with digital platforms. The opportunities are endless in terms of cost savings and becoming more agile. I believe this will help to improve manufacturing processes and facilities. If we look at it as a challenge, I believe it’ll impede us.

Change can be scary, especially when something has been done a certain way for a long time, however, it’s something that smart manufacturers will be getting involved in and it’ll be a positive change for everyone within the industry.

Have you sought out mentorship in your career?

I have a main mentor but throughout my career I have actively sought advice from different people that I have come across. Specifically women, because I’m keen to understand their story, how they’ve balanced work and family, and what challenges they’ve faced being a woman in a leadership role, particularly in manufacturing.

Although that’s not necessarily a detailed mentorship process, I do make sure to approach people from different backgrounds and levels within the business as I go through my career. This is so beneficial because it enables me to get a broad range of experiences and insights that maybe one person wouldn’t give you. In terms of my more official mentorship with Leigh, when I started to undertake my chartership, that’s when he really got involved with supporting me and my development.

My chartership was important because a lot of my colleagues who are chartered did their qualification within an engineering or research function, and so there are less chartered engineers within manufacturing. I wanted to gain that chartership solely on manufacturing experience and Leigh really helped and guided me through that process. I couldn’t recommend seeking out mentorship more.

Do you still see manufacturing as being a male dominated sector? If so, what could be done to attract more women?

Yes, sadly I do think it’s still a very male dominated sector. It has moved forward, but there’s still some way to go, and we need to support women in choosing a career within manufacturing. We need to expose young girls to a manufacturing career, engage the younger generation and encourage them to get involved.

But we also need to keep supporting those who are already in manufacturing careers. It would be great to see manufacturing firms being supportive of women in the industry who are trying to strike up the right balance between work and family life. I don’t think it’s spoken about enough, but working in manufacturing and having a family can be tough and it’s something I believe a lot of young women have to plan for a long time in advance.

Seeing manufacturing firms offer more flexibility and providing good maternity packages will make a lot of women feel valued in their career, not just in that job. It will show that investment is being made in that person for the long-term. This will encourage more women to come into manufacturing and stay.

I know from speaking to my male colleagues that they often have a partner who takes on the majority of childcare. However, being a woman in manufacturing, it might not necessarily be an option, and they might be the one that’s having to balance childcare with their career.

The TMMX Awards 2021 was the culminating event at Digital Manufacturing Week back in November, click here to see a full rundown of winners