The global population is projected to reach 9.7 billion by 2050. Ensuring an adequate, sustainable and secure supply of food is one of the great issues of our time. Maddy White reports on how automation could solve the question of how to feed the planet.

Agricultural robots, or ‘agribots’, are gradually being deployed across the world to assist farmers and improve productivity. The result is a much more precise and smart operation.

From weed-removing and fruit-picking to digitalising yield count and soil monitoring, agribots could enhance farming processes in just about every area of the sector. Is this what the future of farming and food production will look like?

In theory, agricultural robotics is a compelling idea. It offers highly focused, round-the-clock operation, providing a much more detailed approach to farming compared to what a human workforce can offer.

Plus, it presents the possibility of scaling up operations across tens or hundreds of hectares and potentially millions of plants. Automation also enables the collection of vast amounts of data that can connect operations across the farm, making the whole operation smarter, more efficient and less wasteful of energy, water, chemicals and fertiliser.

However, farming is a traditional industry, often family-run, and farmers tend to be asset-rich but income-poor – the supermarket drive for cheap food means they face a constant battle to stay on the right side of tight margins.

This means that making large investments in new technology such as robotics and digitalisation can be challenging, both financially and professionally.

Pricing and profitability are not the only headwinds facing farmers. A shortage of labour, particularly seasonal labour as Brexit approaches, is becoming a serious issue in the UK.

After March 2019, European Union citizens may find it harder to work in the UK – and for less, thanks to a weaker pound. How to bring the harvest in is becoming a real worry for some farmers. If handled properly, however, this could open up opportunities for automation.

The pressures facing farmers add up to a strong case for investing in automation, but can they afford the price tag? The answer to upfront costs could be found in an increasingly popular approach to circumventing capital expenditure – servitization.

Service-based models are gaining popularity, and servitization adoption rates by manufacturers are rising across all industries. Thus, agribot servitization could create a mutually beneficial pathway between the agribot supplier and farmer, yielding valuable revenue and relationship opportunities. 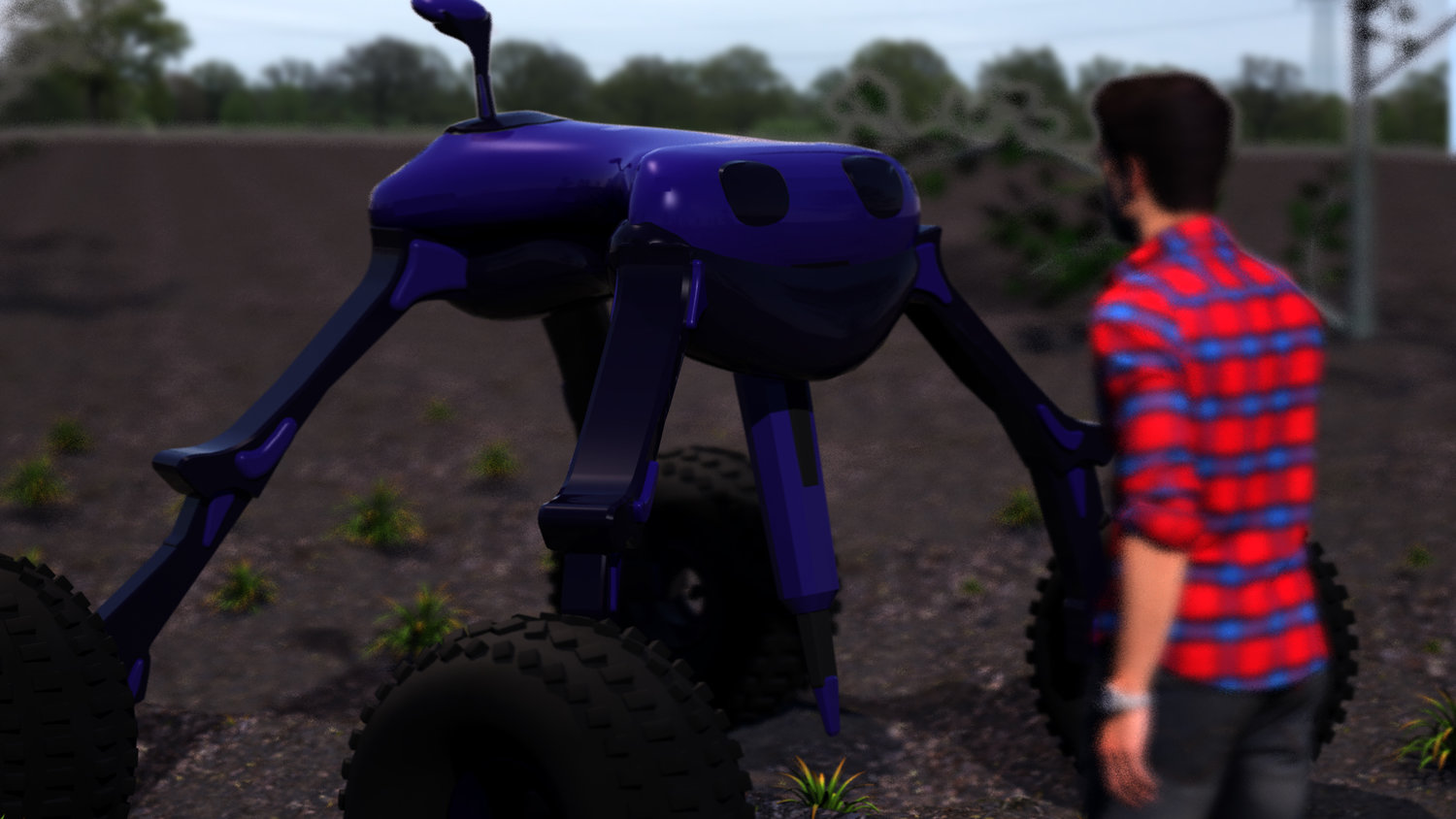 The pay-as-you-go process of servitization is about more than avoiding the daunting cost of outright purchase, although this approach should not be completely novel to most farmers. Very large, occasionally used equipment such as combine harvesters are often hired in – complete with driver – as needed, so hardware-as-a-service is something many farmers my well feel at home with.

But a robot is a very different piece of equipment to traditional agricultural machinery, such as a tractor or combine. For a start, maintenance is complicated, and set up and system/software upgrades are much better handled by a service provider than a farmer-owner.

One business attempting to introduce this concept into the mainstream is Small Robot Company. It has engineered a compact four-part robotic system to monitor plant and soil health, and autonomously look after feeding, seeding and weeding on farms.

“If we can deliver a healthy crop at the end of the year – and for that we charge a certain amount per hectare – then there is no upfront purchase cost and the farmer doesn’t have to worry about how reliable the robots are, they just pay per hectare. At the end of it all, the risk is on us,” founder of Small Robot, Ben Scott-Robinson (pictured below) tells me.

The system at Small Robot consists of Tom (a crop and soil monitoring robot), Dick (a precision spraying and laser weeding robot), Harry (a precision drilling and planting robot), and Wilma (the operating system), each with their own specific roles but designed to work in harmony.

Scott-Robinson says that speaking to farmers and understanding their market has been essential. “We are very focused on the customer, we are coming into this with a service model to solve an efficiency and waste problem that farmers have.”

The main driver behind the project is that farming as an industry ‘is broken’, according to Scott-Robinson. The amount of chemicals (for example, fertiliser) which are wasted has made the production costs of arable farming increase significantly, while prices remain virtually the same. 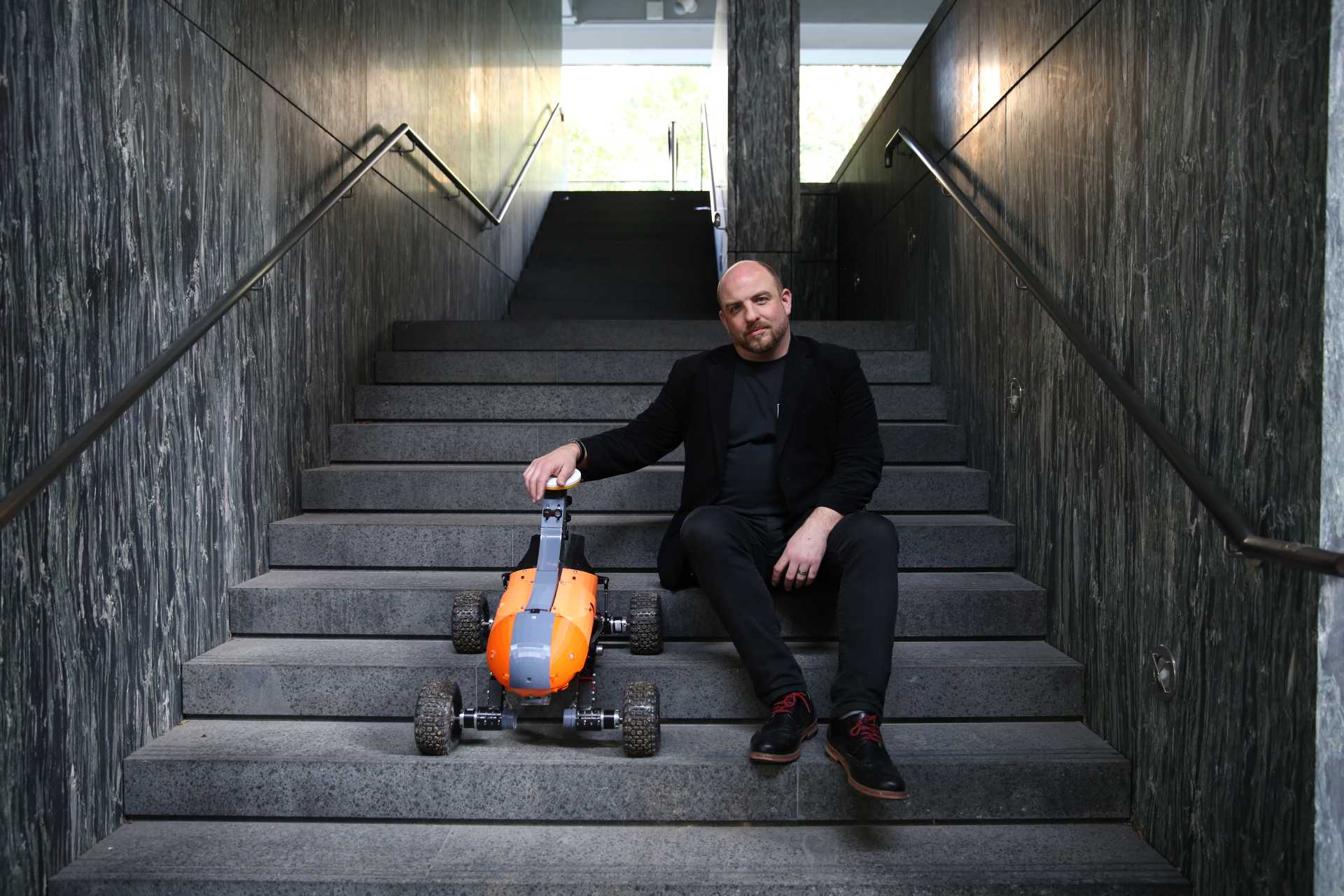 Scott-Robinson explains the system is going to be trialled across 20 farms. “Farmers are paying a fee to be one of the first 20 farms to have access to our technology. It took about two months to find that 20, they are across the UK and are various sizes. We have a farmer who has 200 hectares in Norfolk, and we also have the National Trust onboard – it is a real range.”

Small Robot’s agribots monitor crops on a plant-by-plant basis, which the company believes will minimise waste from excess chemicals and maintain individual crop health. This detailed processing of every plant would be impossibly complicated and time consuming for humans to replicate.

“Tom is able to go out to a field, drive around autonomously and take thousands of plant monitoring photos. It can do this because it has a GNSS system (eg, GPS, Galileo or GLONASS) coupled with software and other localisation sensors (magnetometers and wheel-mounted shaft encoders), which enables it to locate itself to 2cm accuracy on the ground,” explains Joe Allnutt head of robotics at Small Robot.

“We can use the photos to inform our AI system, teaching it to recognise problems or potential problems with crops.” Allnutt adds.

After a day in the field, the completely autonomous robot returns to its ‘kennel’ to recharge its battery and download gigabytes of collected data for analysis.

The high-precision localisation used by Tom means that it knows exactly where a farmer’s individual plants are, whether they are germinated and what they need next. The software algorithms behind Tom will even suggest what fertiliser and chemicals are needed to maximise crop yields. The result is bespoke addition of additives, rather than blanket spraying across a whole field – much more precise, much less wasteful.

Too many farmers fail to benefit from collecting valuable information because it is expensive and complicated to assemble data sets at the plant level. This data, which includes information about crop health, soil condition and chemical balance could be analysed and acted on to enable the entire farming operation to be connected and enhanced.

These opportunities, coupled with labour shortages and the accessibility of the servitization model may well be the impetus the sector needs to adopt agribots.

Farmers that do seize the opportunity offered by agribots will spearhead the future of smart farming.

As demand for food rises with an increasing world population, they will need to find new ways to maximise their yield, work around the clock and collect data about crop health. If that happens, then the world’s oldest industry will become a key showcase for what Industry 4.0 and digitalisation is capable of achieving.