Posted on 4 Jan 2023 by James Devonshire

The UK manufacturing industry ended 2022 on somewhat of a downer, with output, new orders and employment all falling at faster rates, according to the latest S&P Global / CIPS UK Manufacturing PMI®.

Despite beating the earlier flash estimate of 44.7, December’s seasonally adjusted PMI of 45.3 —  a 31-month low — remains in contraction territory (below 50), down from 46.5 in November. The UK Manufgacturing PMI has now remained below the neutral 50 mark for five consecutive months. Moreover, December’s PMI is actually one of the weakest since mid-2009. This reality is masked by the unusual series lows recorded during the first COVID-19 lockdown in 2020.

Manufacturers reported reduced output as a result of fewer new orders, as well disruption caused by stretched supply chains and raw materials shortages. Employment levels and stocks of purchases also fell in December, while prices continued to rise (albeit at a slower rate than witnessed since November 2020).

As we frequently hear during our conversations with manufacturers, Brexit-related hangovers and ongoing supply chain disruption are still having an impact. December’s PMI revealed how Brexit-related issues, such as shipping delays and higher costs, were cited as reasons why UK manufacturers have seen lower demand from mainland Europe, with EU clients opting to source products from elsewhere.

Manufacturing organisations will now begin the New Year on the backfoot. We’ll be monitoring the situation closely to see how 2023 unfolds. 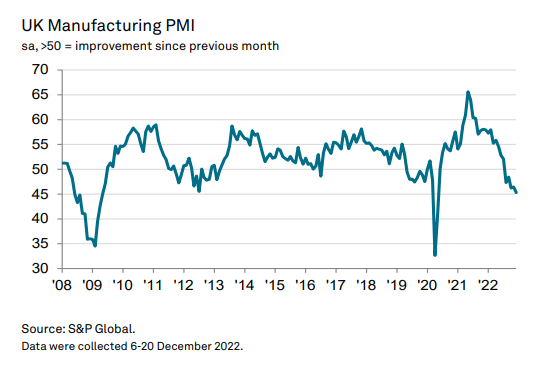 Commenting on the latest survey results, Rob Dobson, Director at S&P Global Market Intelligence, said: “The UK manufacturing downturn took a further turn for the worse at the end of the year. Output contracted at one of the quickest rates during the past 14 years, as new order inflows weakened and supply chain issues continued to bite. The decline in new business was worryingly steep, as weak domestic demand was accompanied by a further marked drop in new orders from overseas.

“Clients are increasingly downbeat and reluctant to commit to new contracts, not just in the UK but also in key markets like the US, China and the EU. The weakness in the latter is still being exacerbated by the constraints of Brexit, as higher costs, administrative burdens and shipping delays encourage increasing numbers of clients to shun trade with the UK. The downturn in industry is also increasingly being felt in the labour market, with manufacturers now shedding jobs at the quickest pace in over two years.

“There was slightly better news on the inflation front, as rates of increase in input prices and factory selling prices both slowed further in December. However, as this is mainly just the result of weakened demand reducing supply imbalances it is unlikely to provide much real respite for manufacturers and their operating margins as they head into what looks like being a difficult 2023.”

Dr. John Glen, Chief Economist at the Chartered Institute of Procurement & Supply, said: “The downward trend over the last few months as a result of high inflation and falling orders impacting output and employment levels continued at an accelerated pace in December with the index posting at one of the lowest levels since the last recession.

“New orders dropped at one of the fastest rates in over a decade as overseas customers were put off by Brexit customs requirements pushing up costs and delays and domestic orders were affected by the general pressure from rising prices. This knock-on effect meant that manufacturing companies shed more jobs reducing their operational capacity for work that never materialised at a time when they still struggled to find the right skills and regain normality over their businesses.

“All these black spots managed to overshadow some of the improvements for manufacturers such as a further easing in supply-chain delays or the higher rates of activity in the investment goods sector or input price inflation easing to a two-year low. The overarching concerns remain that there is little power in the UK economy’s engine of growth for 2023 and manufacturers were painfully aware of this as business expectations remained at historically low levels again.”

Maddie Walker, Industry X lead for Accenture in the UK, said: “A continued downturn in manufacturing ends the year on a disappointing note, with rising costs and deteriorating demand delivering another blow. With customers feeling the sting of inflation, muted sales in the Christmas trading period will weaken confidence and a fall in orders may put a brake on further production in the months ahead. However, we know that manufacturers have become experts at resilience. We expect to see more use of productivity and process improvement programmes to improve operational efficiency as we move into the new year.”

Huw Howells, Head of Manufacturing and Industrials at Lloyds Bank Corporate & Institutional Banking, said: “Manufacturers start 2023 on somewhat uncertain ground as December shows a fifth month of contraction. There are silver linings in the supply chain, but unknowns remain for 2023, making forecasting difficult as manufacturers balance demand and supply. Inflation remains high, and there’s concerns that further price increases may push down demand.

“Manufacturers are making the most of an increased, though erratic, supply of semiconductors and the price of shipping containers returning close to pre-pandemic levels. Firms are also hoping China’s zero-Covid policy U-turn may smoothen supply out of the country. The cost of energy remains a significant unknown with continued uncertainty over the Government’s Energy Bill Relief Scheme once it ends in March.”