Digital models and simulations have played an important part in enabling VentilatorChallengeUK – the consortium of industrial, technology and engineering businesses working in concert to produce medical ventilators – to innovate at speed.

Many have commented on the incredible pace at which the VentilatorChallengeUK consortium has moved. What has been key to that responsiveness, and what has Siemens’ role been in how that process has happened and continues to be managed?

Brian Holliday: I believe it’s worked because of the extreme, ego-less collaboration that we’ve seen between the organisations. Siemens became involved in the design, validation and the delivery of two of the subassembly lines for the Penlon ventilator.

[Read The Manufacturer’s interview with Dick Elsy for more details]

There was a 48-hour period, believe it or not, in which the team took the product model and production floor space and turned around a validated digital model that informed the manufacturing location build of the subassembly line.

What that translated into was being able to have finished breather and flow valve meter subassemblies coming off a production line just three weeks after receiving the call to help.

That’s an incredible achievement and there’s a huge amount we can learn from that in terms of leadership, behaviour, collaboration and technology. Within the consortium, I’m helping to capture everything we can from all the organisations involved, and do bear in mind, that’s 5,000 people, so there are a lot of lessons to be captured.

In the case of my team at Siemens Digital Industries, we applied 40 years of experience building variable speed drives (VSDs) at Congleton. We’re very used to taking a bill of materials, creating a bill of process and building a manufacturing line; and more recently, we’ve been doing that in a digital environment using computer-aided visual tools.

In this instance, designing the manufacturing line necessitated two-metre envelopes around each worker and the required steps in production by the Medicines and Healthcare products Regulatory Agency (MHRA). Once those two factors had been accounted for, we could get to what Siemens is very adept at with both our approach and tools – making that production environment lean.

An abridged version of this interview has been published as a podcast.

Click the image below if you’d prefer to listen to Brian’s insights: 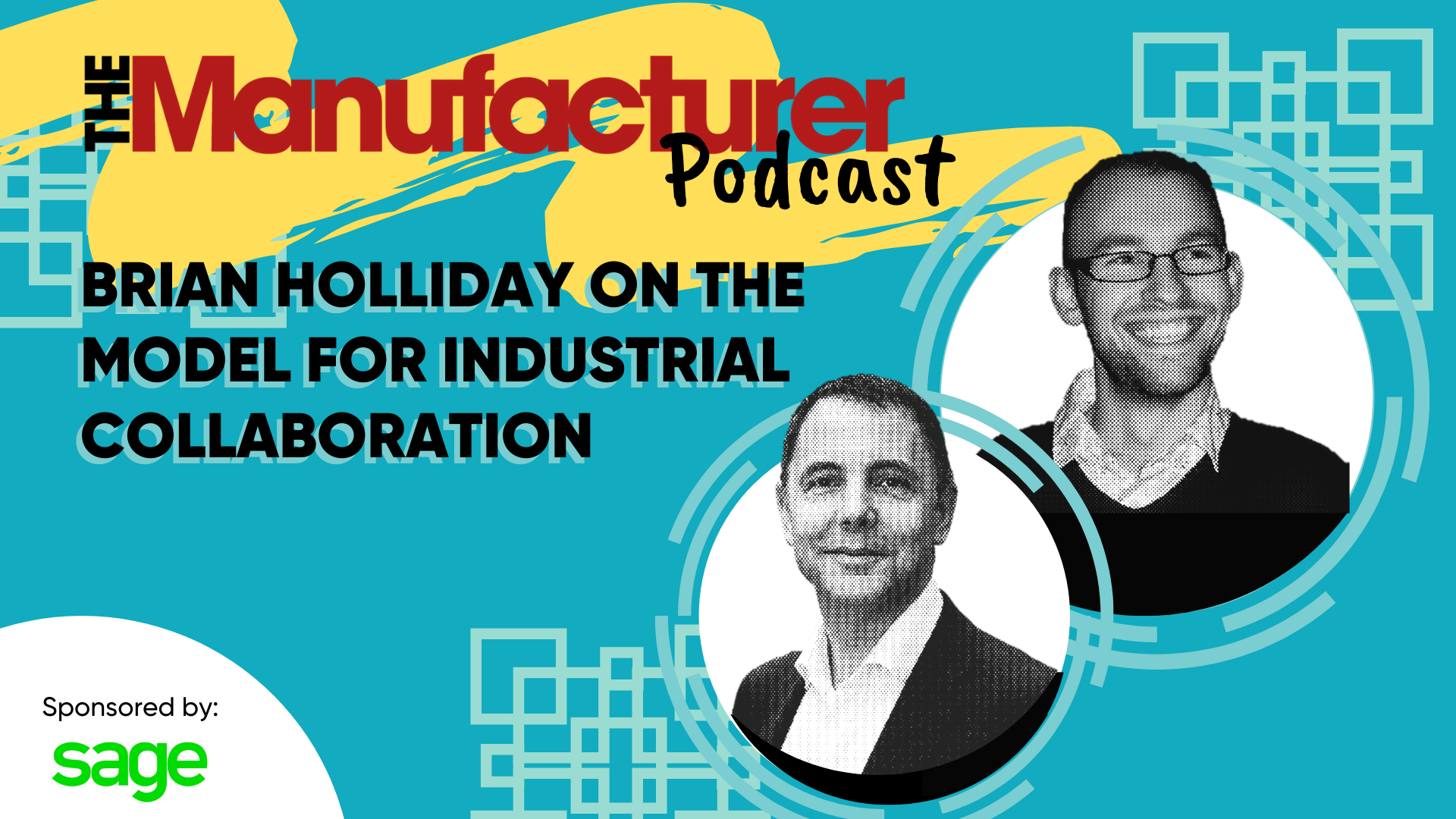 One of the benefits of using digital tools like digital models and augmented reality is that they often have a record of what’s been done, of past iterations.

Indeed. In this case, we had the Siemens team working very much in conjunction with teams from Siemens Healthineers, Ford, Penlon, Airbus, Surface Technology International (STI), DHL, McLaren, and it was very evident after the team had designed the breather subassembly production line that that same approach could be applied to the flow meter line.

We had a digital model of what turned out to be eight production lines in a manufacturing space and the question came up, could we put the flow valves subassembly directly alongside that in the same facility?

The digital model gave us an incredible start point in terms of understanding the space available, the air and power feeds to the environment, the modelled envelopes for workers, and the feed lines into the back of each of those production cells.

You can see how undertaking that exercise a second time in quick succession, as we did in this case, meant never being on the critical path for being able to deliver these two subassemblies.

Can you explain in more detail how digital simulations helped compress the delivery timescale?

We were working on a device from a small company that built roughly five units a week and we were trying to scale that to somewhere in the region of 1,500.

The early model designs for building the breather subassembly had about 90 manufacturing stations. We created a discrete event model in Plant Simulation software that took into account the necessary build steps and the 3D production environment, as well as the human role in that environment – the ergonomics as well as social distancing; that gave us a very high level of confidence to move ahead and invest.

Digital models have enabled consortium members to operate safely, to comply to regulations, and to reoptimise against early assumptions. Image: Siemens | VentilatorChallengeUK

It also meant that once we got to the optimisation of that line, we found it was possible to take 90 stations down to just 30 with an appropriate takt time, which dramatically reduces the footprint and, importantly, the number of operators and volunteers needed to make the product.

Digital models have enabled us to be safe, to comply to a regulated medical device manufacturing process, and enabled us to deeply reoptimise against early assumptions. Everyone involved has recognised the power of digital simulations and models, when it really mattered, to substantially compress the timescale.

What have you and the Siemens team taken from the experience so far and brought back to your own organisation?

For all consortium members, it’s fair to say that the wider employee base in each of our organisations has been inspired by the activities of those who’ve been able to contribute something.

In Siemens’ case, around 100 people have been engaged one way or another from Siemens Healthineers in Sudbury, from our Siemens Energy colleagues in Lincoln who’ve been quickly turning around machines, fixtures and other parts, and from Siemens Congleton with our expertise in Digital Industries.

Everyone’s been inspired by the ability to contribute to something that we hadn’t expected to be able to. We also haven’t stopped our day-to-day operations while trying to contribute to this consortium. At Sudbury, for example, we’ve seen a three-fold increase in demand for blood gas analysis due to Covid-19, which means the factory’s been running at full speed. At Congleton, we’ve been running at roughly 80% of capacity.

In contributing to and supporting VentilatorChallengeUK, what have you been most proud of?

A personal high for Ali was the 21 days it took to deliver essentially a new medical device, from design to signed-off delivery to the NHS.

To give you some context for that, it would ordinarily take somewhere in the region of 177 to 245 days to get approval from an early submission, and it could take another nine months beyond that to get CE approval.

This consortium achieved a design change to the Penlon ventilator, taking off the anaesthetic element that wasn’t needed in this case, and also taking into account clinical feedback from the use of the ventilator in hospitals, specifically for patients to benefit from a burst mode to help clear the lungs due to this particular condition, and that turnaround was three weeks, an almost unbelievable outcome.

Many are hoping that the change in our behaviours as a result of lockdown – reduced unnecessary consumption, waste production, CO2 emissions – will be maintained in the ‘new normal’. What role do digital models and simulations play in helping manufacturers become more sustainable?

It starts with the design of the product. If you can design knowing the materials that you’re using, you can essentially design carbon out. Of course, one of the advantages of digital prototyping is reducing the need for a physical object; you validate in the virtual world, or at the very least, you get much closer to a final version without the material waste in arriving there.

When you translate that into the design of the production environment, you know you’ve got the optimum footprint. That again reduces the construction effort and cost associated.

Just as importantly, virtualising your factory control systems enables you to focus on energy usage. The best energy reduction activity is switching machinery off or not having it under load when not needed. Building a digital model allows you to become more aware of your energy usage, but it’s important to also make use of the parameter data available to us in control systems, being one example.

Motors account for around 50% of the total energy consumed in industry. Many see one motor as being the same as any other, but they’re not. Modern motors are much, much more efficient, particularly when coupled with a variable speed drive (VSD), and that applies to all sorts of lifting, moving and actuation tasks.

The greatest gains come through the combination of digital tools to simulate, with modern motors and control systems that can automatically switch things off when not needed – you can’t rely on human operators do that consistently. This is where the digital enterprise can start to bring together optimisation of process as well as optimisation of resource.