What does the future hold for UK Aerospace?

Commercial aviation may have been stuck in a holding pattern, only time will tell if its growth has been grounded outright.

The “gravest crisis” in the history of civil aviation. That’s how Airbus CEO Guillaume Faury described COVID-19 on the opening day of the (virtual) Farnborough International Airshow 2020.

“The virus was in none of our risk scenarios”, Faury stated, noting that the industry quickly progressed from “a very short-term, immediate situation of the world’s air fleets being grounded”, to the point where “airlines have had to adapt to a situation which is lasting months and maybe years.”

Faury believes the impact of COVID-19 will likely be felt for the next three to five years, if not more.

A slightly more optimistic timeline was expressed by the largely SME suppliers I spoke to in researching this feature – most of which are braced for continued turbulence through 2020 and 2021, with smoother flying anticipated from 2022 and beyond. 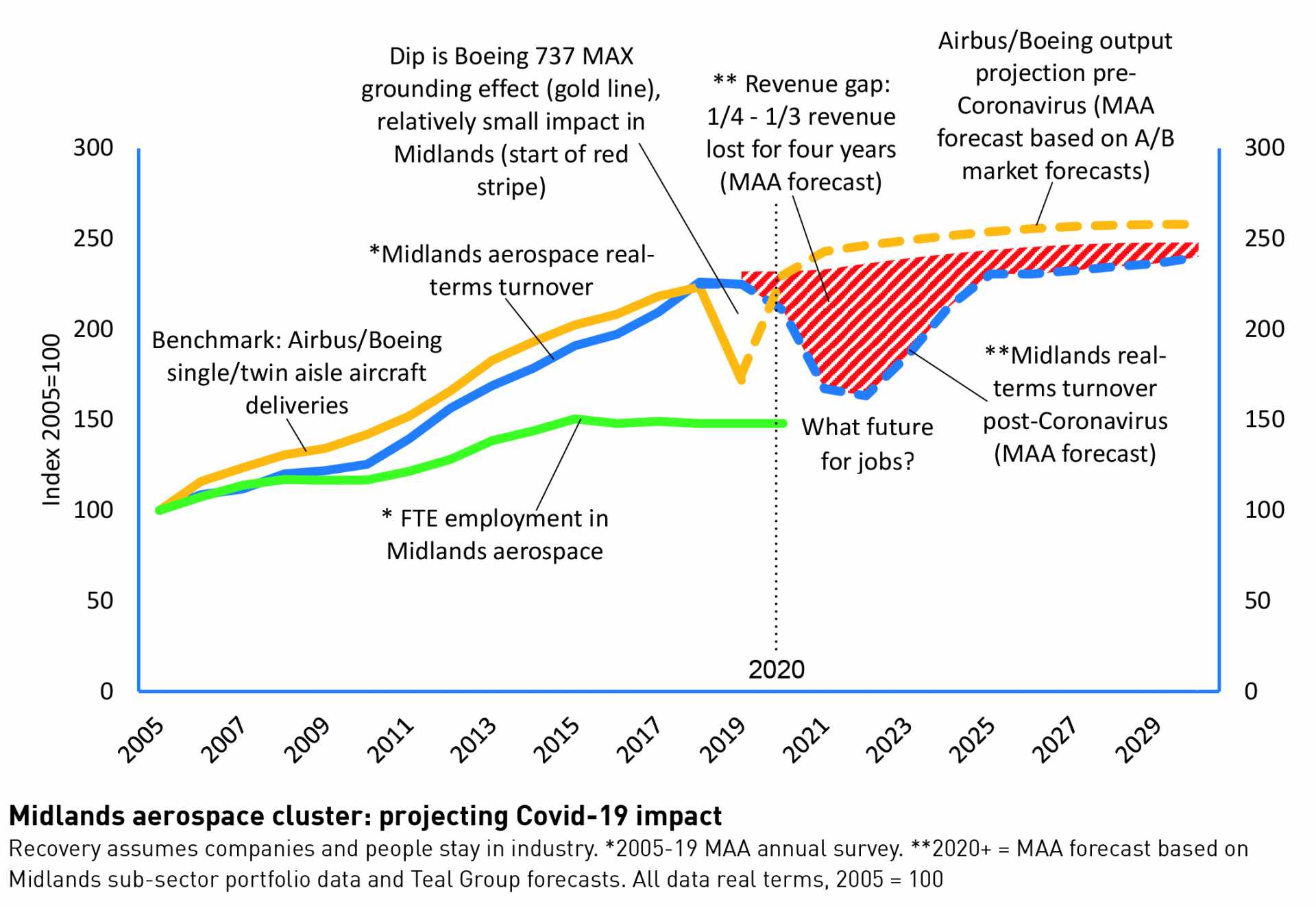 As Andrew Mair, CEO of the Midlands Aerospace Alliance (MAA), told me; “The realistic view is understanding that in terms of aircraft and engine programmes, you’re going to have quite a big trough in the second half of 2020 where inventories are unwound – inventories often built up to cope with Brexit, interestingly.”

“That will be followed by a renewal of activity later in 2021, companies will want to be first out of the gate once there’s clarity on the shape of the pandemic globally and what’s happening in terms of air travel returning.”

Clearly, then, the next 12-18 months are crucial for both OEMs and suppliers. So, what actions are businesses taking today?

Taking off into the wind

Diversification and investment look to be the two most common strategies being adopted.

Birmingham-based AE Aerospace is a supplier of high-quality precision machined components to the aerospace and advanced engineering markets.

The decision several years ago to grow its defence and business jet orderbook means that although the business is unlikely to see growth this year, it shouldn’t be as badly affected as others.

Figures show that in 2019, the UK Aerospace sector contributed:

Managing Director, Peter Bruch told me that AE Aerospace intends to come out of this crisis in a stronger position and able to take advantage of the opportunities available to it, whatever they may be.

“We have continued to invest this year in new equipment, software, our network, training and apprenticeships. We have reorganised our operations into customer-focused teams and either promoted or recruited the appropriate people to enhance our project management capabilities and better support our customers.

“We were the first company to have its ‘SC21 C&G’ funding approved by BEIS, which will launch in September. This two-year Supply Chain programme will improve our competitiveness and accelerate our growth.

“We have also started developing a new five-year plan that includes diversifying into new markets and increasing exports, both of which will leverage the high-value, low-volume complex parts we are renowned for.”

Produmax was one of the many aerospace suppliers who turned their hand to producing medical components in response to the government’s call for assistance.

That demonstration of agility has inspired the Shipley-based precision engineering specialist to diversify its portfolio into defence and energy, according to its Financial Director, Mandy Ridyard.

Aero Services Global is a £43m critical aerospace supplier and has a history of investing in new technologies that enable the group to expedite innovation in its core markets and explore opportunities in other areas.

In the past two months, the group has invested more than £1m on its largest five-axis milling machine to date and completed the acquisition of Wirral-based AMF Precision Engineering, further boosting its long-bed machining capabilities and providing access to new opportunities in the defence and medical sectors.

The investment comes just weeks after the group secured a £31m funding package to support its ambitious three-year growth plans.

Managing Director Simon Weston explained to me, “I’m confident that we’ll emerge stronger from the pandemic and, in some cases, in a better position to move up the supply chain to produce components and tooling directly for primes in civil aerospace and defence.”

This appetite for organisational investment appears to be mirrored in the government’s ambition for the nation, particularly around a so-called ‘green recovery’.

In July, grants totalling £400m – match-funded by government and industry and delivered through the Aerospace Technology Institute (ATI) – were announced by the Business Secretary Alok Sharma to fund cutting-edge research projects.

The recently announced ‘FlyZero’ initiative – which aims to develop zero-carbon emission aircraft – is an even clearer indicator of Westminster’s ambition for the UK “to lead the world in green aviation”.

The FlyZero announcement follows the launch of the similarly titled Jet Zero council, made up of industry, government and environmental representatives.

The council’s somewhat optimistic goal is to demonstrate – within a generation – that net zero emissions passenger flight across the Atlantic is possible.

The more pragmatic view from industry is that aviation’s future lies in low emissions rather than no emissions, with the majority of efforts concentrated on producing hybrid-electric aircraft.

Nevertheless, the trio of announcements was welcomed by Paul Everitt, head of the ADS trade body, who told me, “It is essential we continue to invest in technology and to establish the UK as a leader in the decarbonisation of aviation.

“In an intensely competitive international industry, we must continue to invest, even through this difficult period. Industry has championed a green recovery as vital to protecting high-value, high-skilled jobs and ensuring vital work in aerospace R&D is able to continue.”

The electrification of aviation is also likely to continue at pace, with UK players ranging from industry giants (Rolls-Royce and Airbus) to relative newcomers (YASA and Electroflight).

The MAA’s Andrew Mair told me that, “Short-range small aircraft are already going electric and that requires different power and propulsion systems, providing a wealth of new opportunities to suppliers.”

Every business operating today is having to deal with increased uncertainty and a lack of visibility into the future, factors which pose a particular challenge for those operating in aerospace, an industry with long lifecycle products that themselves have long lead times.

Almost everyone I spoke to commented on the need for management teams to become comfortable operating in an uncertain world – COVID-19 is by far the most serious global disruption to the sector, but it is not the first and will not be the last.

“Business can take solace that the world will fly again,” declared Meggitt CEO Tony Wood at this year’s Farnborough Airshow. “There is no question of the need for a global sustainable aviation system that connects people, businesses and economies around the world and underpins global trade.”

Furthermore, some 80% of the world’s population are yet to take their maiden flight on an aircraft, Wood continued, and as global prosperity continues to improve, “aviation has the responsibility to provide the technologies and capability to enable that to happen on a sustainable basis.”

There are already positive signs of recovery on domestic flights and some medium-range routes over Europe, the US and parts of Asia. The appetite for long-haul flights, however, remains subdued.

Ultimately, the future of commercial aerospace rests on the willingness and confidence of passengers to travel. Passengers need to be assured that everything that can be done to safeguard their health and wellbeing is being done.

And not just at 38,000 ft. Surveys have shown that passengers expect just as much protection in airports and during transfers as they do while onboard aircraft. That in itself offers a range of new opportunities for manufacturers to supply innovative new ‘no-touch’ solutions and antimicrobial materials.

Stafford-based Addmaster is just one example. The developer of performance enhancing additives for the plastic, paper, textile, paintings and coatings industry, is currently working with the aviation sector to help prevent the spread of bacteria and viruses on anything from aircraft seats, tables and walls to luggage trolley and security trays.

“Hygiene is now front and centre of business thinking and nowhere more so than in the travel sector where companies need to give millions of people peace of mind that they can fly safely,” says Addmaster CEO, Paul Morris.

“We have seen a massive surge of enquiries for our ‘Biomaster’ antimicrobial technology over the past three months and are now in advanced trials with a number of global organisations and new tests are starting every week.”

That’s still a long way from its peak of 7.8 million in July 2019, however, so it’s crucial that as passenger levels continue to grow, the new systems and procedures put in place as a result of COVID-19 don’t buckle.