Why the automotive industry is not as automated as it seems

Carmakers and their sub suppliers are overlooking a huge automation potential that can help them overcome the labour and productivity challenges facing the industry.

We are used to thinking about the automotive industry as a front runner for robots and automation. In many ways, it also is: If you look at the global statistics from the International Federation of Robots (IFR), 21 % of all robot installations happened in this sector in 2020 making it the second-largest customer base for automation. But, digging a little deeper, these statistics are masking an industry still very reliant on manual labour.

As independent advisors on robots and automation, my colleagues and I often visit the factories of OEM’s and their sub suppliers to scout for new automation opportunities. For example, when they struggle with finding enough human operators.

What we often find is that many tasks that probably should have been automated long ago, are still left untouched by robots.

This does not have to be a problem in itself. Though, in a world of labour shortages, heavily affected by two years of pandemic, supply chain disruptions and geopolitical turmoil, securing the continued production at a competitive rate is critical. For this, automation plays a key role.

Automation is heavily concentrated in a few key areas

To understand the car industry’s automation paradox, we must look closer at the areas where robots are currently used, namely at the main car factories and with the many sub suppliers of car components.

Most robot installations in the automotive industry are found in the car body production. This includes converting metal sheets into a full car body that is then painted. There are often around 200 to 300 robots dedicated to this process alone at every car manufacturer. However, the remaining processes on the assembly line, as well as the transport, picking and preparing of car parts, are only sporadically automated.

When it comes to the sub suppliers, they too have many options. They are typically doing a lot of the machining and welding of the car components (with the welding of the car body, which happens at the car factory, being an exception). In these areas, we also very often find opportunities to automate. There are currently many robotic solutions catering to these processes, making automating them generally low-risk and accessible.

The intralogistics of the car factory is an area within the automotive industry where we often see high potential for automation. Though high variance makes using automation solutions for kitting difficult, there are other proven solutions for transporting car parts across the factory floor, Autonomous Mobile Robots (AMRs) being a good example of this. Though not all transport types may be relevant to automate, it is often feasible to automate 50-80% of the ones that are. Automating the intralogistics of a car factory can reduce the manpower needed by up to 80%.

Is automation always the solution?

Some car manufacturers make the mistake of diving into the deep end when it comes to automation. The latest trend is incorporating collaborative robots into assembly lines in answer to an increase in demand for customization, which has put higher value on the ability to retool manufacturing processes quickly.

The implementation of novel technologies in a strict just-in-time assembly line is highly risky and requires meticulous planning and technological expertise. This is likely one of the main reasons that the automotive industry is lagging behind many other industries when it comes to automating their assembly processes. If a robotic solution is not functioning robustly and reliably, it can have a critical impact on the entire production line, causing expensive delays.

To ensure the success of such implementations, it is crucial to do significant planning and detailed specifications up front, as this will mitigate the risk of adjustments and surprises during the integration or run-in of the solution. Similarly, it is highly advisable to automate the manual processes with the lowest risk first, instead of trying to push in a specific technology for the sake of the technology.

To sum up: Yes, the automotive industry is already employing a large number of robots. Still, the industry has a big potential for further automation – especially within assembly, pre-assembly, and intralogistics. To navigate successfully through the current headwinds, car OEM’s and their tier 1 and 2 suppliers must start exploring these new opportunities. 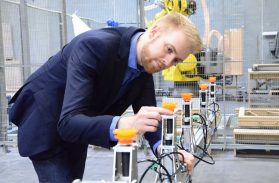 Mikkel Viager is a Senior Robot & Automation Advisor at Gain & Co. He has helped numerous manufacturing businesses globally achieve their business goals through automation. He also holds a master’s degree in Automation and Robot Technology from the Technical University of Denmark.