Across the globe, companies are building up cash reserves. In the UK, total cash on hand has risen by 14% since 2010. However, the majority of this cash sits in the bank accounts of a relatively small number of corporates. Grant Thornton weighs in.

Evidence of the UK’s growing ‘cash conundrum’ has been gathered as part of the annual study into the needs of the UK economy. The study examined the cash and working capital performance of almost 3,000 public and private UK companies. So why, in an unprecedented low-interest rate environment, are large companies holding so much cash?

Since the 2008 financial crisis, major global economies have experienced a period of sustained volatility and uncertainty; plus, in the UK, increased uncertainty following the Brexit result. In the short-term, currency volatility has significantly weakened sterling, creating positive or negative cash flow impacts for companies, depending on their balance of trade. 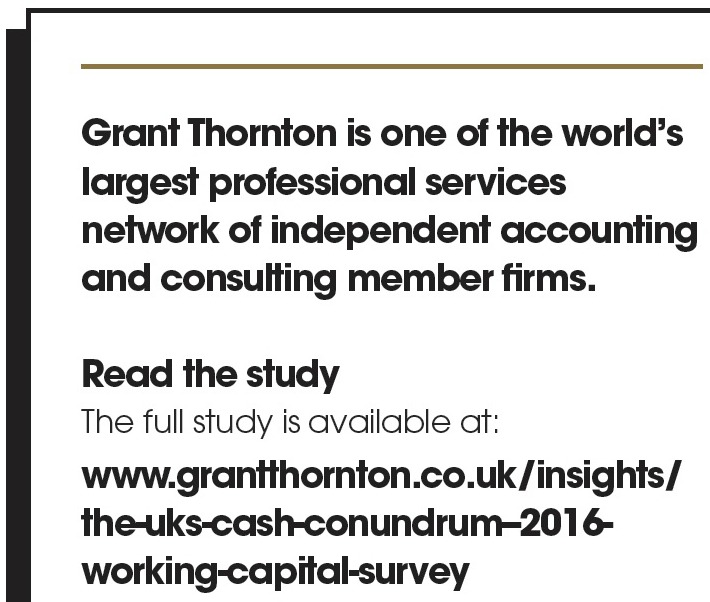 While understandable, this liquidity imbalance across the UK economy is creating a challenge for companies seeking to accelerate growth. The study identified that improvements delivered in working capital allowed dynamic companies across a wide range of sectors to achieve levels of growth in profitability that far out-stripped that of the UK corporate average.

A potential first step should be for companies to examine optimisation of their own working capital practices. Study benchmarks highlight more than £135bn of excess working capital in UK companies. Consider the impact that releasing only a portion of that capital could have on the UK’s cash conundrum.

When companies take action to focus on these initiatives, the improvements are usually transformational. Companies we have worked with report reductions in their overall working capital requirements of 10 – 20% of the value of gross working capital (5 – 10% of annual turnover).

The study covers a range of sectors, but in manufacturing the challenge of effective working capital management is ever present: supply chains are complex and inventory balances are kept high to satisfy the customer service levels demanded by Tier 1 manufacturers or end customers.

The study showed that industry is one of only three sectors to experience a deterioration in working capital in the past year, with cash-to-cash days up by 2% year-on-year, compared to a 3% improvement across the entire population.

The key driver of this deterioration is in inventory, as businesses seek to drive greater cost reductions at the expense of working capital, and continue to be pressured by demands from customers.

Furthermore, the gap between the upper and lower quartile of performance is widening, indicating that companies which focus on working capital reap benefits while others struggle.

The simple answer to the UK’s cash conundrum is that there is no obvious, instant fix. In the short term, the emphasis remains on individual companies working to plan for and optimise their cash and working capital requirements.