The South West of England is home to over 38% of England’s dairy cows, producing more than 3.3 billion litres of milk every year, according to the National Farmers Union.

Much of this milk is supplied to surrounding cheesemakers to manufacture some of the most popular brands of cheddar cheese in the world.

“We are located in perfect dairy farming country,” says Giles Barber, director at AJ & RG Barber, or Barber’s Cheese as it is known locally. “Somerset is home to one of the world’s most well-known cheeses.

“Cheddar has been made here longer than anywhere else, so there is a real sense of history and expertise that is available, as well as the supply of milk.”

The company, which is situated in the rural village of Ditcheat, has trebled both the size of its turnover and output since 2000. The last five years has seen a significant part of that growth, with the business now exporting to 30 countries, as international markets’ appetite for premium hard cheeses grows.

Barber’s gets its milk from 150 local farms within a 35-mile radius of Ditcheat. Barber says, “Our milk is predominantly from outdoor-grazed cows, and that is important for the quality of cheese. The supply is absolutely critical for cheesemaking, we are lucky here.”

I was shown what a typical cheesemaking day in the Somerset factory looks like. It begins with fresh milk being rigorously tested. Once approved, it is pasteurised and Barber’s own unique traditional starter cultures and vegetarian rennet are added. 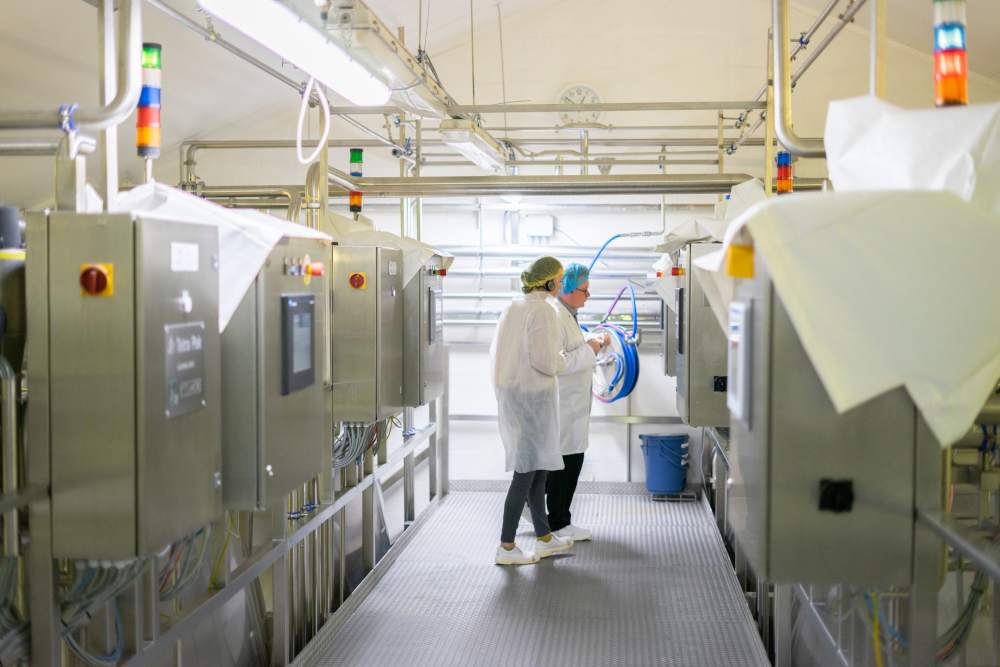 Starter cultures are blends of ‘friendly’ bacteria that start the cheesemaking process by making the milk more acidic. They also determine the flavour, texture and aroma of the final product. The cultures split the liquid whey from the solid curds, the mixture is gently heated, and the whey is removed.

The curds form slabs, which are cut up and stacked by hand in the factory, a process known as ‘cheddaring’. They are then milled into small pieces and salt is added for preservation and flavour. The curds are then pressed into blocks to be matured in wooden boxes.

Each batch of cheese matures for at least three months before it is graded for quality and taste. It takes less than one day to turn milk into cheese, but its ultimate quality is determined by what happens during those three months.

“We use technology to help improve the consistency of what we do. There is the art of cheesemaking and that is your investment in people, but there is the science to it as well.”

He explains that the business continually invests in technology that will improve the quality of the products, advance efficiency, and allow the cheesemaker to be innovative.

“One example of this is that we are currently waxing cheese, which has always been done manually. This year we are automating that process, as we continue to grow and look to become a leader in waxed cheese.

“You have seen we use robotics around the site where we can, to improve operations. We have recently installed a new manufacturing software system on the factory floor to capture much more data about everything from milk quality through to cheese composition, so we can trace every block of cheese back to the farm it came from originally.” 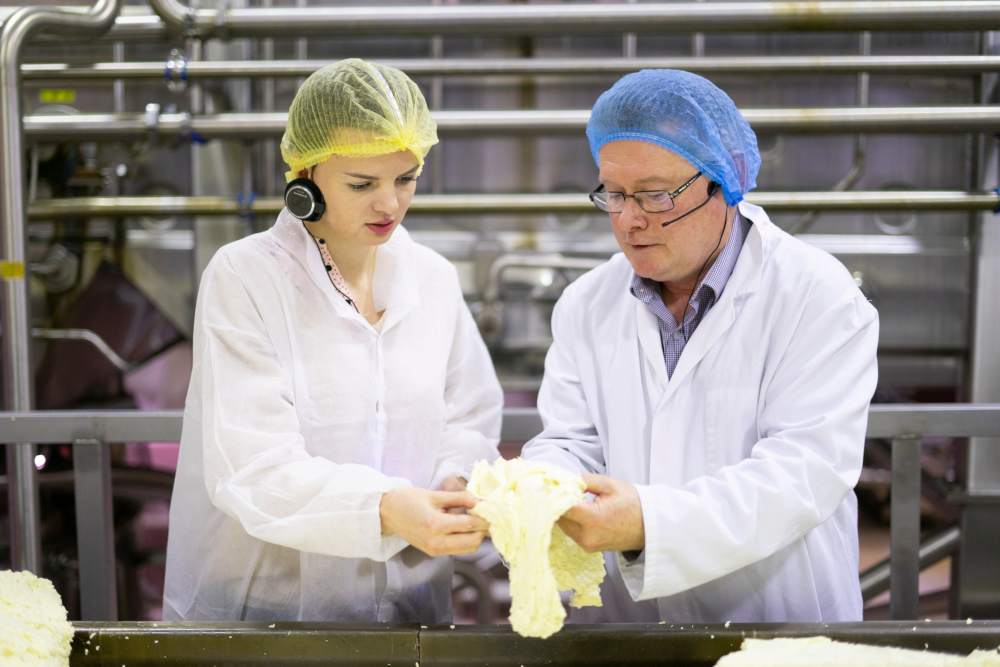 He adds, “If you are grading the cheese regularly and recording its quality, and capturing that data, then you can establish the common trends of what makes the best cheese, and that learning enables you to get better and better, and more consistent.”

The team at Barber’s uses the entire milk fraction, the curds, whey and water.

Barber says, “Cheesemaking is the core of the business, all of the milk goes into that process, but about 85% of the milk is removed in the form of whey.

“We separate any residual butterfat from the whey, which goes into making farmhouse butter. We then take the liquid and process the whey protein through a sophisticated membrane and concentrate it to the right level to be used in infant formula products. All of it is exported outside of the UK to infant formula factories in places like the Philippines, Thailand and Australia.

“The last part of the process is to separate the lactose. We separate this into a concentrated serum that then goes to either be fermented and distilled to make vodka – we have a cousin who has a brand called Black Cow Vodka – or it goes into anaerobic digestion plants for energy creation.

“The final by-product is water, which we use to wash down and clean the cheesemaking areas. Once that has been done, the water is then piped a few miles underground to a purification plant where it is cleaned to a standard that allows us to put it back into the water system. It is often cleaner than the river it goes into, so it is improving the river water quality.”

The future of cheesemaking

Barber believes there are opportunities in the sector that the company can exploit. “The British market is more mature than many, but cheese is still a growth sector in the UK. The prospects are modest, but there are exciting areas within that: goat’s, halloumi, continental – there are certainly openings.”

Ford Farm in Dorset is also part of the Barber group and was acquired as the business’s second site in 2010. “We are looking at innovation in goat’s cheese, as the market, and our position in it, grows. We might develop our products in Dorset, as it is a lower volume site, and then we make the cheese here in higher volumes.”

Barber explains there is a constant eye on fine-tuning existing recipes, but the development of cheese products can take a long time. “Our better cheeses are up to two years old – we are not really aiming to make young cheeses – so we work hard to develop cheeses that add new consumer experiences. And this takes time.” 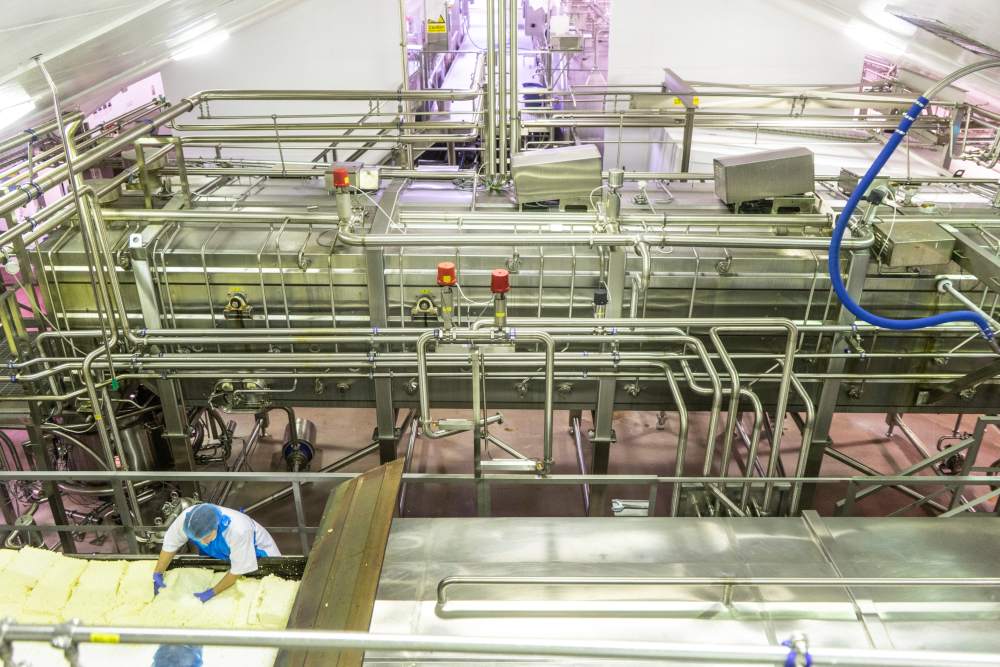 He says there are certainly challenges for the cheese market, particularly with the shift in consumer tastes to non-dairy products. “It is a challenge for farmers and for us to reassure customers that the products we make are actually good for them and are nutritious, and also that the animals are well-cared for, particularly in light of the vegan movement.

“We have the Barber’s standards, which builds on the Red Tractor scheme. We have it to assure the quality of milk, our additional hygiene regulations, food quality and safety, and the welfare of the animals. Essentially, it is a tasty and nutritious product that comes from farms that are passionate about what they do. That’s a powerful story.”