CDE and SBRI: armed for growth

It has been rather difficult for SMEs to get themselves onto the defence sector supply chain. MOD’s Centre for Defence Enterprise (CDE) and Innovate UK’s Small Business Research Initiative (SBRI) are ways for smaller businesses to get a way in, Jim Pennycook explained to Ruari McCallion.

The UK’s defence manufacturing industry is dominated by a small number of OEMs, led by BAE Systems and EADS, and it has, historically, been very difficult for smaller businesses to get any attention paid to their ideas.

The CDE (Centre for Defence Enterprise) initiative was launched in 2008, as part of the MOD’s Defence Science and Technology Laboratory (DSTL).

It uses a series of innovation competitions to enable SMEs to get their proof-of concept research projects in front of MOD decision makers.

The UKDSC is described as an independent body that brings together representatives from large companies in the defence industry in a “collaborative space to address export opportunities”.

Its staff, who are seconded from the defence industry, operate under MOD and industry non-disclosure agreements to protect the intellectual property of bidders.

The CDE, in association with the UKDSC, is currently conducting four SBRI (Small Business Research Initiative) compliant competitions. Entries for the first two, on mission training and persistent surveillance from the air, are open until early August this year.

Both offer up to £1m of phase one research funding. Entries and bids are invited from industry, including SMEs, and academia.

The winners will be announced in September, so the process is also deliberately addressing the complaint that getting responses from government and the further reaches of the defence supply chain took far too long. 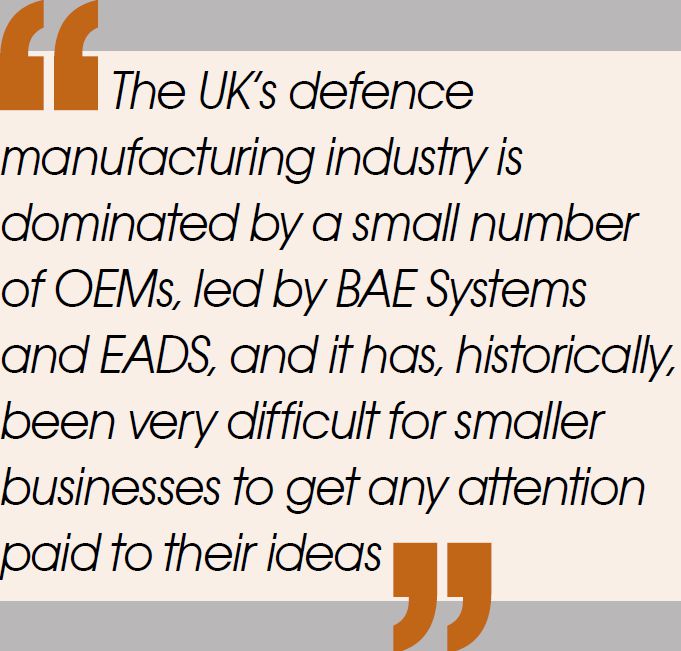 Entries can be made using the CDE online portal, at www.gov.uk/cdeportal-submit-a-proposal.

“In 2007, Lord Drayson made clear that he was of the opinion that the UK’s defence industry wasn’t accessing sources of innovation from SMEs,” said Jim Pennycook, head of operations at CDE.

“The CDE was set up to offer an easier route in via competitions to enable SMEs to engage with the MOD.”

The competitions are described as a way of ‘articulating the challenges’ faced by MOD.

“They are commercial competitions but the way the challenges are described open up the competitions to bidders beyond the traditional defence field,” Pennycook explained.

“With these competitions we are working to ensure that SMEs are not disadvantaged. We understand that SMEs depend on cash flow so the pace of decision-making is very fast.”

In addition to the DGP Innovation Challenge, CDE is holding a number of themed competitions this year, as well as the Enduring Challenge competition, which is always open.

The Enduring Challenge has a budget of £3m a year and typically funds proposals for proof-of- concept research in the range of £50,000 to £100,000 for work of three to nine months duration.

The range of projects that can be considered extends from protection and ‘situational awareness’ (including GPS applications) to communications and reduced cost of ownership.

Past competitions have covered Additive Manufacturing for Future Defence Requirements. Companies outside the normal defence sector with whom the CDE has worked include Cosworth and Williams from the motorsport cluster.

“Whenever we are looking at new technologies we will always be interested in how manufacturing can help”, Pennycook concluded.

In the wake of Britishvolt demise Industry Experts Unite to Underscore Need for Clear UK Electric Vehicle Policy to Ramp up Affordability – Net Zero is a MUST!