The UK’s defence manufacturing sector punches above its weight – but how far? Ruari McCallion has been holding a weigh-in.

According to the Office for National Statistics, the total value of sales of military products manufactured in the UK across the four main product groups – military fighting vehicles; weapons and ammunition; ships and floating structures, and air and spacecraft and related machinery – was £13.1 billion in 2013. 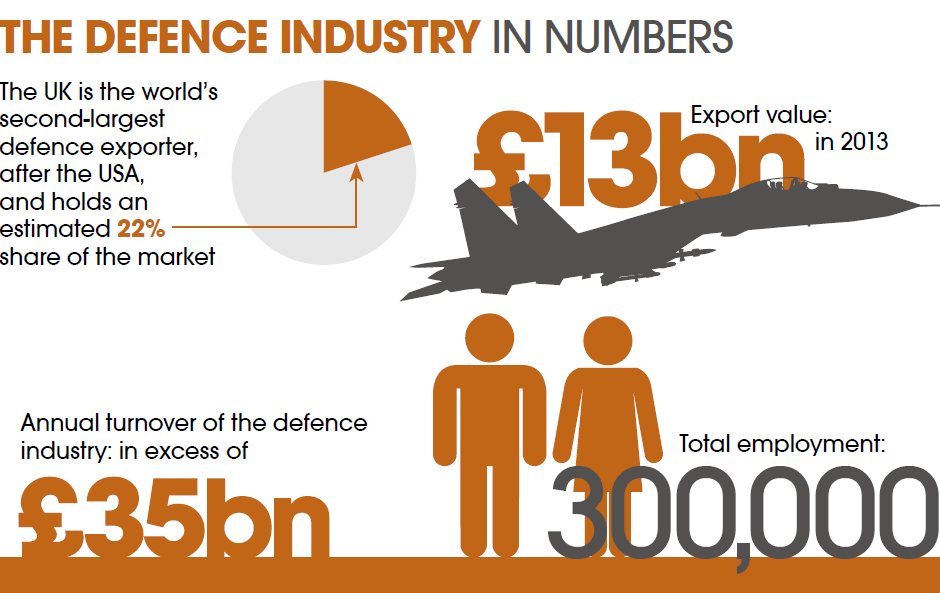 But that related solely to military sales. Total ‘group’ sales were somewhat more than that – more than twice as much, in fact, at £26.2bn, led by the ‘air and spacecraft and related machinery’ group with no less than £20.2bn altogether.

But the Daily Telegraph reported as long ago as 2011 that the defence industry’s turnover was £35bn.

The lines between military and civilian can sometimes get blurred – avionics and maritime electronics, for example are often dual purpose and COTS (commercial off-the-shelf) purchasing has been a reality for some years.

The divergence in expenditure on R&D illustrates the point, as the amount of expenditure on clearly military R&D has fallen, that allocated to civilian expenditure has risen, practically as a mirror-image. There is not entire agreement even on those numbers, however.

The UK is the world’s second-largest exporter of defence equipment, behind the USA. Its market share is estimated at 22%; in 2013 (the most recent year for which statistics are available), it won £13bn of new defence and security business, around £1.5bn up from the previous year.

Around 55,000 jobs are sustained by those exports and 300,000 people overall are employed in defence-related activities.

The biggest UK-based suppliers to the MoD are BAE Systems; Babcock; Qinetiq, and Rolls-Royce – which, of course, supplies engines to civilian and military customers around the world.

Aerospace has the biggest share of the global defence market, at 62%; the UK’s aerospace sector contributed 83% of the country’s total defence export sales, so it is small wonder that BAE Systems is one of Britain’s largest employers.

Activities related to defence are to be found all over the country, from Plymouth in the South West to the established clusters around Farnborough and in the North-West, who’s Aerospace Alliance reaches across the sea to a small, but important, cluster on the Isle of Man.

The Government expects the fastest-growing sector over 2013-17 to be the ‘cyber security’ segment. Export sales are expected to expand at around 20% a year over the period.

The domination of the large OEMs came about through the growth and then agglomeration of companies that had local presence and used nearby suppliers, to huge-globe-spanning organisations today.

The Government has also fostered growth in its defence establishment, in areas beyond the armed forces themselves.

This led to the perception that smaller companies were being squeezed out – or, at least, finding it progressively more difficult to get their ideas listened to and their products put on the approved list.

Finally, in 2007, Lord Drayson declared that he believed that the country was missing out on innovation that was and is happening among SMEs.

The outcome has been the creation of the Centre for Defence Enterprise; the Defence Growth Partnership; the Small Business Research Initiative and, most recently, the opening of the UK Defence Solutions Centre.

SMEs in the defence sector now have routes to present ideas, innovations and to compete for research funding in non-traditional ways.

As the sector is demonstrably important to research, employment, manufacturing and the balance of payments, greater involvement of innovators can only be helpful.