Think of drones and unmanned aerial vehicles (UAVs) and the picture that comes to mind is of a fighter-sized aeroplane with a bulbous nose, usually portrayed against a backdrop of a conflict in Afghanistan or somewhere in the Middle East.

But not all UAVs are Reapers or Predators and not all of their missions are in battlefield situations.

Dr Yoge Patel is chief executive of Blue Bear, which is based near Cranfield in Bedfordshire.

“It has the ability to hover and manoeuvre autonomously within complex industrial environments. It carries Createc’s N-Visage 3-D radiation mapping software with a gamma radiation spectrometer.”

What that adds up to is a pretty smart machine. If you are, say, Ukrainian or Japanese and you have a nuclear plant that has suffered a catastrophic incident – or even if you have a waste storage facility in Cumbria, NW England – you obviously want to know how things are going within the seriously irradiated areas but you cannot risk sending human beings into them.

That can give people the wrong idea about your personnel policies. What you need is a RISER platform.

“RISER carries systems that tell it where to go,” Dr Patel said. “You don’t have GPS inside a nuclear facility so it employs sensors to draw a picture of the room it is in and it uses that picture in real time to work out what to do.” 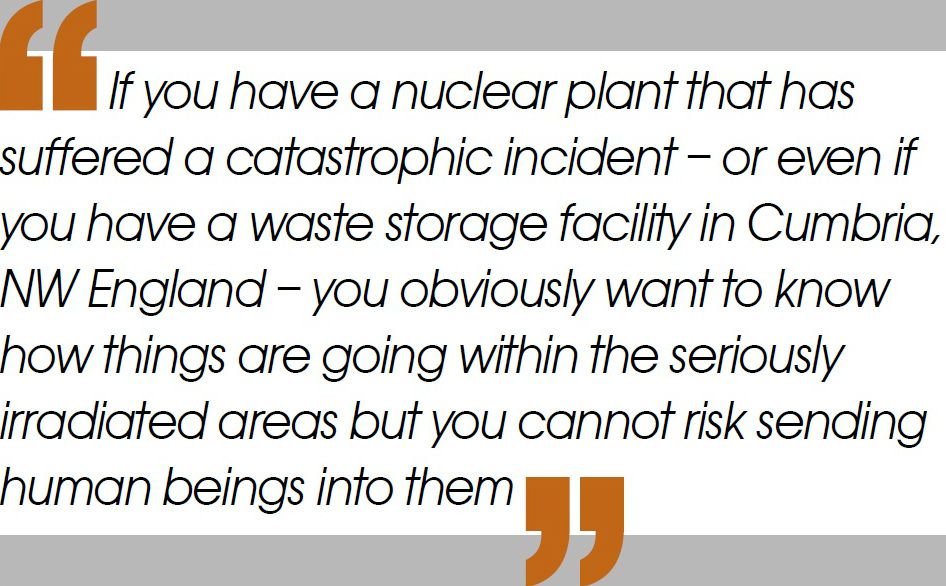 It does not simply follow a pre-programmed route. A gamma radiation sensor overlays the map of the physical environment and builds up a picture of the “hot spots” inside the facility.

It can be useful even if you don’t have a nuclear facility, for such things as on-ground inspection of aeroplanes, including in the immediate aftermath of lightning strikes or impact by hailstones, for example, and for power line inspection, tracking and monitoring beyond the line of sight, for oil platforms and a range of other applications.

RISER is just the latest in a line of UAVs developed and built by Blue Bear Systems, which extend from multi-rotor craft to fixed-wing aircraft. It designs and develops avionics and ground control stations and offers a multiple vehicle integration testbed called MUVIT.

The company was born 16 years ago from Qinetiq, which was previously part of the Defence Evaluation and Research Agency (DERA). One of its platforms, launched in 2011, is entirely UK sourced.

“We design everything and outsource, for example, carbon fibre manufacturing and metal fabrication,” Dr Patel explained.

“We focus on integration and on where we want to control risk.”

Any componentry bought off the shelf but will be “race tuned” – and the racing analogy is deliberate; the company has worked with motor racing businesses and has used the skills of aerodynamicists with F1 backgrounds, for example.

“It truly transformed the business. The time taken to manufacture and assemble a UAV has been slashed, compared with 2005.

“If you have complexity in the fuselage, it improves reliability and consistency, and reduces the price differential – it costs pretty much the same whether you’re making five, 10 or 100.”

Blue Bear’s business is primarily in the military field for the moment but the objective is to rebalance so that the majority is in civil applications.