In May this year Rolls-Royce told investors that adverse currency moves could affect its revenues by as much as £350m as a result of the pound’s strength against the euro and the Norwegian krone.

Likewise GKN Driveline lost £19m in the first half of this year because of the weakness of the euro.

The love/hate relationship that manufacturing has with the currency world is similar to a client and their personal trainer; pressure from a strong currency hurts a manufacturer at first but the discipline eventually provides longer term health benefits.

Who would be a manufacturer?

Manufacturers around the world have been hurt through the global financial crisis as central banks weaken their currencies in an attempt to reinvigorate their economies.

Currencies are like a see-saw; when one falls, another rises and the problem shifts to another economy.

Take the Chinese manufacturing sector as an example. It is roughly the same size as the entire French economy ($2.7trn vs $2.8trn in 2014) but slowing – and it’s putting the dampeners on the global economic recovery. 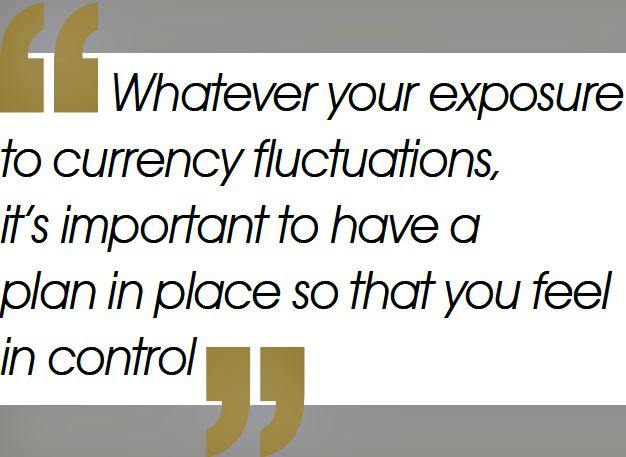 In a bid to prop up this behemoth, the Chinese authorities have kept the yuan as weak as possible.

Volatility within currency markets is a natural side effect of these conditions and is also a constant risk for lots of businesses – yet too few actively manage that risk.

In the past 12 months, sterling has strengthened by 6.20% on a trade weighted basis and for manufacturers from Coventry to Cornwall this has meant rising prices and a necessary shift toward a low cost, high value world.

British manufacturers have needed to take on those higher costs, trim fat and streamline factory conditions in order to offer more specialised products for higher margins, often around 10-15%.

However, while a 10% margin may be a decent enough buffer for a company with no currency risk – i.e. producing and selling in one country – it is insufficient as soon as we cross international borders.

In the past 10 years, the average yearly percentage movement in the rate of the exchange rate of the euro against the US dollar has been 17%.

In the first six months of 2015 alone, it has been 14%. Exchange rate moves have the ability to wipe out even the best of margins.

Whatever you do, don’t do nothing! If you have exposure to currency markets then the best advice is to put a currency strategy in place to actively manage your risk.

Whatever your exposure to currency fluctuations, it’s important to have a plan in place so that you feel in control.

Exchange rates can move quickly – and often unpredictably – and could make a huge difference to your bottom line.