Posted on 8 Oct 2019 by The Manufacturer

The UK government must address soaring electricity prices that inhibit the country’s steel producers from competing with European neighbours, the sector's trade body has warned.

A new report by UK Steel – The Energy Price Gap: A New Power Deal for UK Steel – calls for a “level playing field” on energy prices, so that British steel companies can compete in a new trading environment created by Brexit.

The UK pays on average 62% more than Germany for electricity and around 80% more than France, the report says. This, in an industry where “electricity represents the largest cost after raw materials”.

UK Steel director general, Gareth Stace, said the disparity for steelmakers in the UK has cost the industry £47m this year, at a time where “the sector is already facing wider market uncertainties and trading difficulties”.

The UK Steel sector in numbers:

A nine-point plan has been submitted by UK Steel as part of its findings, to ensure industry jobs are protected and to give the steel industry the “best possible foundation to thrive”.

Stace said “every proposal” has been adopted by EU governments, showing it could be easily introduced in the UK.

UK Steel is now urging “bold” action by the Tories, two years after the party committed to deliver the lowest energy costs in Europe as part of its 2017 manifesto.

British steel producers pay on average £50 per megawatt-hour (MWh), compared to £31 in Germany and £28 in France, the report said. 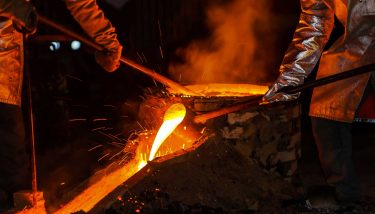 Electricity prices in the UK currently represent around 20% of the cost to convert raw materials into steel, the report found.

“Our new report plainly demonstrates that UK steelmakers face systemically and persistently higher electricity prices than our competitors,” said UK Steel’s Gareth Stace. “Electricity is one of the biggest costs for the steel industry and it damages our competitiveness that we are consistently forced to pay significantly more.

“This is not the time to be cautious, but the time to be bold. The government must act now to provide that level playing field the sector desperately needs. We have put forward nine clear-cut recommendations to close this price gap, which can easily be adopted by the government. To provide valuable jobs, where they are most needed, to boost the UK economy as we leave the EU and to ensure that we are the great trading nation that government say we can be.

“Every proposal has been implemented by EU governments, showing that they could easily be introduced here too. Governments elsewhere in Europe recognise the critical importance of competitively priced energy for steel production and have acted decisively to deliver it. It is high time that the UK government does the same.”