How did Jaguar Land Rover achieve its remarkable turnaround to become the global leader it is today?

Jaguar Land Rover Solihull has been at the centre of that transformation for more than 10 years, and in 2017 it won The Manufacturer Manufacturing Excellence Award for ‘Leadership and Strategy’ at the first attempt.

Steven Barr talked with leaders of Solihull’s 10,000-strong workforce – from the site’s operations director through to volunteers leading the way to improvements on the factory floor – about how they turn strategy into action.

Since the 2008 buyout of Jaguar and Land Rover (JLR) by India’s Tata Motors, JLR has become a global success story. Tata’s strategy was to invest heavily in growth at a time when other multinationals were retrenching following the worldwide financial crash.

Since then, JLR has continued to invest, boosting output to a record 621,109 vehicles sold in 130 countries in 2017, and creating thousands of jobs.

Production is growing globally, with plants in China and Brazil and a plant opening at the end of the year in Slovakia.

The losses of the first few years have been turned into global profits, which are invested back into the business.

A little over 10 years ago, Jaguar and Land Rover produced a handful of models. Now they offer hundreds of models and specification derivatives – highly relevant, desirable products at the forefront of technology thanks to the £22bn invested over the past decade.

JLR is one of the biggest investors in research and development in the UK, with a further £4.2bn being invested in 2017/18 FY. That kind of visionary, strategic leadership is now the stuff of business textbooks.

As manufacturers know well, strategy is nothing without action. So, how did JLR’s flagship manufacturing plant at Solihull, the original home to Land Rover for more than 70 years and which now makes Land Rover, Range Rover and Jaguar models, turn the vision for growth into operational reality?

Director of operations, Nigel Blenkinsop, explains what leadership and strategy mean in practice.

“Change has been a constant feature of life at Solihull. We have succeeded through having clarity of purpose at all levels, developing the systems to support performance, coaching into teams and encouraging talents to be used for the common good.”

More than 60 KPIs (key performance indicators) have been refined into 18 KPIs that drive operations across all three JLR sites and the four technology areas at Solihull (body, paint, trim and logistics).

Even 18 KPIs sounds like a lot. Which ones are really in focus at shop floor level?

“Divert Free – that’s getting it right first time, then Operational Performance in terms of hours in production, also Value Added and Hours Per Unit produced. They are the top four measures in every team and work group,” explains business excellence manager Wayne Killick.

Killick adds that having a uniform set of KPIs has led to strong cooperation with a common purpose across the business, “sometimes with too much help offered!”. JLR’s entry for The Manufacturer MX Awards 2017 was a team effort too.

I dipped into one of Solihull’s teams, the paint shop, to see how leadership and strategy permeates to the factory floor.

Clive Roberts is the manufacturing manager for Paint Operations. He and Charlie Cochrane, production manager, convinced me that JLR really does want its people to thrive and play their part in the success of JLR.

This article first appeared in the July/August issue of The Manufacturer magazine. To subscribe, please click here. 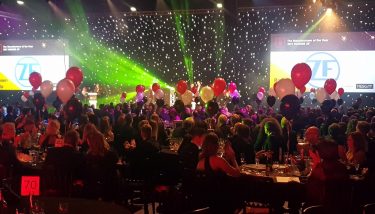 Celebrating the best of British

The Manufacturer MX Awards is an annual programme delivered by The Manufacturer, in association with the Institution of Mechanical Engineers (IMechE).

Click here to book your place at our ceremony & gala dinner

In addition to the formalised Kaizen continuous improvement scheme, which you would expect in a modern manufacturing business, JLR has developed voluntary schemes to maximise employee engagement and support for personal development.

Feedback from the workers is channelled through ‘Development Role’ volunteers like Victoria Foster and Lee Avery. Over several years, Foster has seen how the feedback has turned from complaints about problems to constructive ideas on how operations could be improved.

The quaintly named ‘Dipped in Paint’ programme was introduced by management, but taken over by workers eager to broaden their understanding of all the growing activities of the paint shop.

Perhaps the most progressive and inspiring of these schemes is the Team Improvement Circle, or TIC programme. Employees are encouraged to put forward their ideas for improvements of any kind, and supported with problem-solving techniques to turn them into real solutions.

TIC projects are tested through local and national selection processes. Last year, the paint shop’s own ‘Paint Perfection’ team represented the Solihull plant and headed out to JLR’s Pune plant in India to launch TIC in the local plant.

Solutions and lessons learned are shared around the JLR family of sites and teams, so that an idea grown in Solihull can become a new standard across JLR’s global operations.

The Ganesha trophy for this achievement, alongside The Manufacturer MX Award 2017 for ‘Leadership and Strategy’ and other reminders of glories, have pride of place at Solihull.

So, the real story of JLR’s success is as much about the engagement of JLR’s people at the sharp end of Solihull’s operations as it is about the vision.

JLR’s strategy is developed over time with strong input from engaged employees at all levels.

Leaders at all levels, both volunteers and appointments, are the channels through which strategy is turned into effective action.

And in JLR’s case, that action has been very effective in scaling up production and transforming the company’s fortunes.

Jaguar Land Rover Solihull is now working on entries for a number of categories in The Manufacturer MX Award 2018 that will recognise the excellence of Solihull systems, and especially its people, even more widely.

I’m looking forward to another judging visit in the near future. Next time, I plan to take out an overdraft, fuel up and drive my battered but much-loved 1972 Range Rover to introduce her to the new generation of Solihull’s finest.