Manufacturing smarter with the Internet of Things

The Manufacturer scratches the surface of the internet of things and how it is set to revolutionise the way we live our lives.

As 2014 drew to a close, the UK Government published the paper The Internet of Things: making the most of the second digital revolution, written by its chief scientific adviser, Sir Mark Walport. 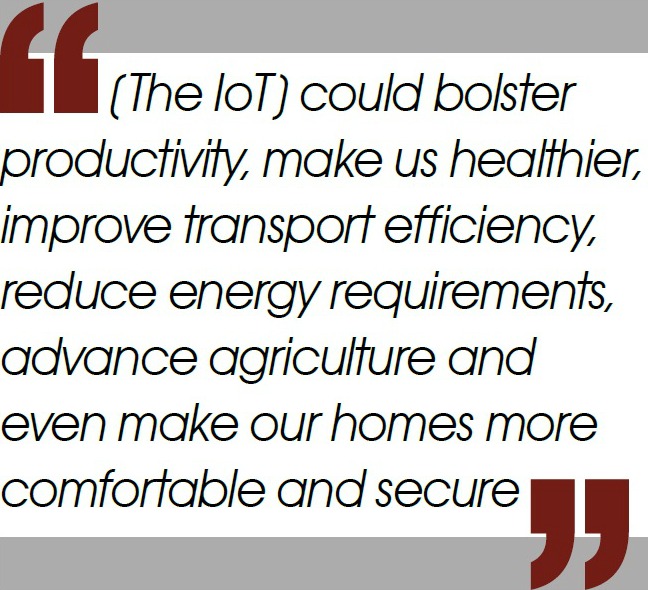 It set out Government recommendations to realise David Cameron’s ambition of making the UK “the most digital nation in the G8,” a goal which Cameron says will only be achieved by “making the very best of today’s digital technology”.

In the report, the Prime Minister refers to the Internet of Things (IoT) – the employment of technologies that will allow almost any everyday object to connect and communicate with multiple other objects, people or software via the Internet – as a “transformative development” that has the potential to change all of our lives.

Imagine an electricity meter that advises its owner on energy use; vehicles that automatically avoid congestion; health monitors that keep an eye on vital signs; vending machines that know which products need replenishing; and buildings that gather data on how its space is used as a means of pre-empting behaviour and accommodating it.

With the proliferation and combination of broadband and mobile devices helping pave the way to a world offering almost total connectivity, several sectors have already pioneered the implementation of IoT in regards to public infrastructure, including many aspects of transport and public works. 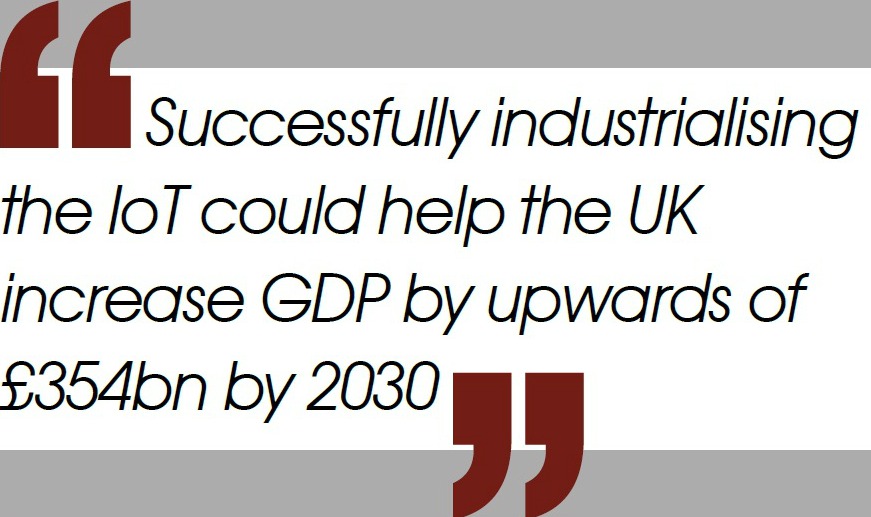 Advances in data gathering and analytics are creating a wide variety of possibilities for smart building technology. Building management systems (BMS), for example, now have the ability to monitor, record and anticipate occupants’ preferences for light, temperature, entertainment and other services.

Energy and gas supplier, EDF Energy plans to install smart metres into 100% of the homes and small businesses it provides energy to within the next five years. The technology will include gas and electricity meters, an in-house display and a (non-Internet) connected communications hub that allows customers to view data on other devices and link with the supplier’s systems.

The result of a collaboration between Microsoft, the Future Cities Catapult and Guide Dogs (a UK charity for the blind and partially sighted). The headset provides directions and live transport information to help visually impaired individuals navigate urban environments.

Described as “painting a picture of the world through sound”, the horizons of visually impaired people with Jenny Cook, head of strategy and research at Guide Dogs, summarising true independence as being about “a change in perception, to allow somebody to say on this day I can go beyond what I know.”

Funded by the Future Cities Catapult, a global centre of excellence on urban innovation, Cities Unlocked embodies the initial phase of a much larger research, which seeks to examine the potential of IoT being interwoven into our future environments.

Another brainchild of the Future Cities Catapult, and something that has the potential to revolutionise the manufacturing supply chain, is the automation of transportation processes in certain environments.

According to Honda, i-ACC utilised a camera and radar to sense the position of other vehicles on the road, and applies an algorithm to calculate the likelihood of vehicles in other lanes cutting in, enabling the equipped vehicles to react “quickly, safely and comfortably”.

IoT also offers opportunities to automate freight carriers, such as Mercedes-Benz’s unveiling of its Future Truck 2025, a self-driving truck that the manufacturer claims could hit motorways within the next decade.

Pitched as an answer to increasing traffic, inadequate infrastructure, increasing costs and a shortage of drivers, Mercedes says the vehicle will connect to existing assistance systems with enhanced sensors to its Highway Pilot systems, similar to the autopilot function aircraft make use of.

The potential for IoT to deliver benefits in healthcare is vast and a wide selection of projects are currently underway. These technologies could amalgamate the delivery of care, improve clinical outcomes and yield considerable cost efficiencies for the increasingly stretched NHS.

Telehealth, the delivery of health related services and information via telecommunications technologies, ranges from something as simple as two health professionals discussing a patient via telephone, to procedures as sophisticated as conducting robotic surgery between facilities a thousand miles apart.

According to the NHS, telecare and telehealth services can be of particular benefit to those living with long-term conditions, providing you and your relatives with “peace of mind that you’re safe in your own home and that your health is stable.”

Telehealth equipment which monitor data such as blood pressure, blood glucose levels or weight can not only allow living independently for longer, but can reduce a patient’s number of GP and unplanned hospital visits, helping to alleviate pressure placed on health providers. 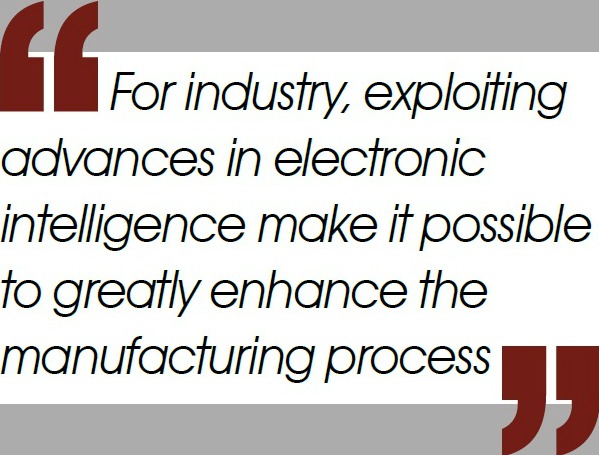 Today across almost all of the developed world, the manufacturing landscape is rapidly evolving. For industry, capitalising on advances in electronic intelligence make it possible to greatly enhance the manufacturing process.

Equipment able to measure and modify processes, alongside factories able to communicate with each other over a wide area, provides greater efficiency and flexibility while keeping production costs low and improving quality, reliability, consistency and safety.

Though there is rising a number of cases where the IoT has been successfully embraced, manufacturers on a much broader scale have so far been largely reticent about adopting the technological advances and opportunities it offers.

According to a recent study by global technology consultants Accenture, successfully industrialising the IoT could help the UK increase GDP by upwards of £354bn by 2030.

However the report also reveals that these gains are at risk of not being realised. To date, of the 1,400 global business leaders surveyed, only seven percent have developed a comprehensive IoT strategy with investments to match.

Another factor potentially holding back a greater adoption of IoT could be, on a personal level, society’s response to seeing its personal data and activities being tracked and analysed in far greater detail; and, on an industrial level, issues surrounding security and the threat that may represent to a businesses’ intellectual property.

The lack of industry’s commitment to the IoT may also be due to cost prohibitions or the difficulty of applying it to generate new revenue streams, with companies focusing more on using IoT to make efficiency gains, raise employee productivity and reduce operational expenses, suggests Accenture’s chief technology officer, Paul Daugherty.

“The [IoT] is here today, helping to improve productivity and reduce costs. But its full economic potential will only be achieved if companies move beyond using digital technology to make efficiency gains alone and unlock the value of data to create new markets and revenue streams.

“That means radically changing how they do business, working with competitors, forming partnerships with other industries, redesigning organisational structures and investing in new skills and talents.”