A consortium of some of Wales’ top industry, energy, infrastructure, legal, academic and engineering organisations have joined forces to submit a public and private bid for a £37million project, to scope out a route to the decarbonisation of industry in the South Wales region. The bid will help them to plan the acceleration of being net zero and create the UK’s first large scale carbon dioxide shipping industry at the same time.

The much-anticipated ’10 Point Plan’ to deliver a Green Industrial Revolution will mobilise £12 billion of Government investment and create 250,000 jobs in the “green economy”. With the Prime Minister setting aside a further £200 million on top of £800m already pledged to create “carbon capture clusters”, this bid can play a crucial role as part of this Green Industrial Revolution.

South Wales is the second largest industrial emitter of carbon dioxide in the UK. Last year the UK became the first country in the world to legislate that it will achieve net zero emissions by 2050. Net zero means that any remaining emissions are offset by using other means. This has also formed part of the UK Government’s industrial strategy. 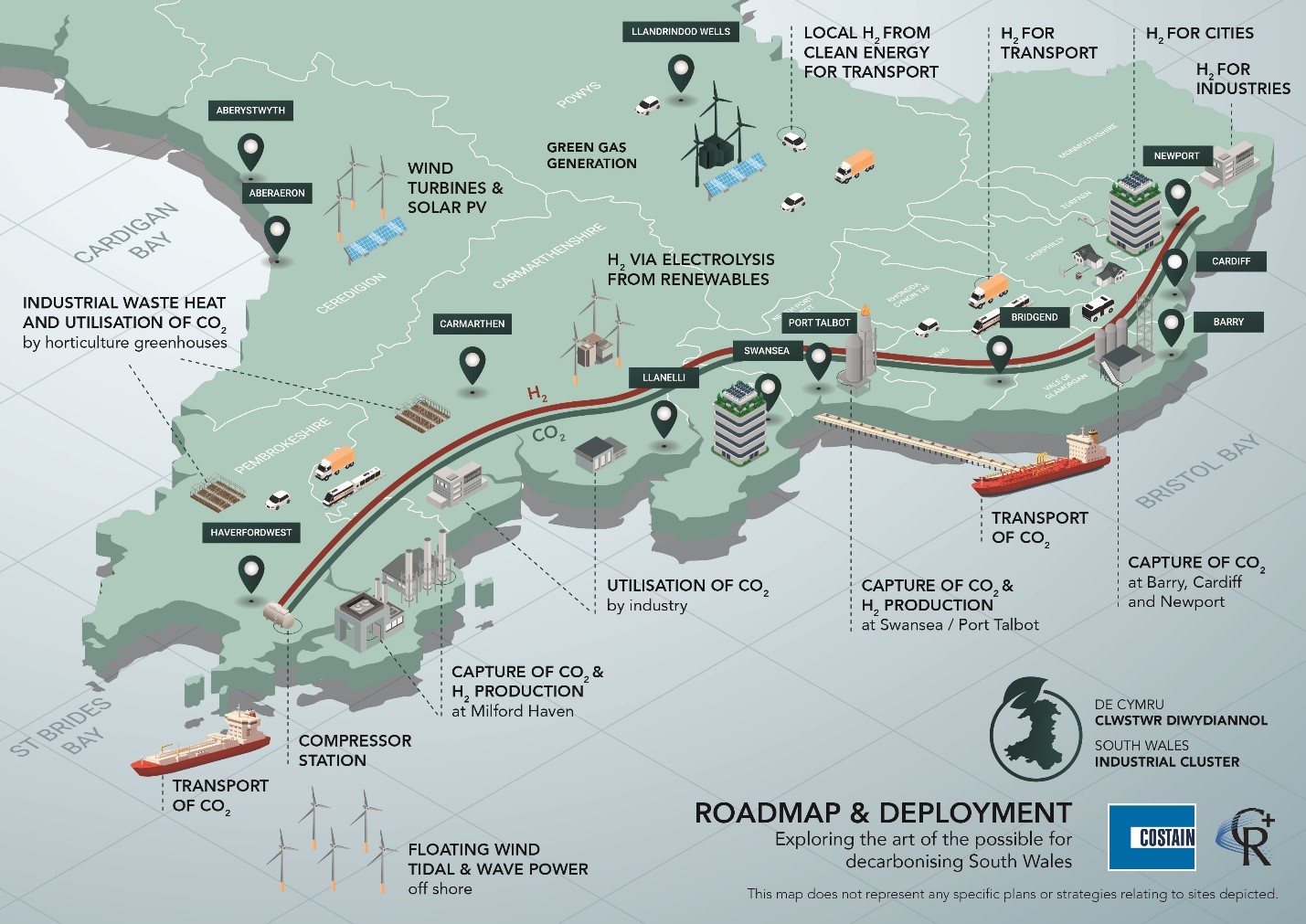 The SWIC deployment project will carry out the urgent engineering studies to keep South Wales on the path to decarbonisation, including the production, distribution and use of hydrogen, creating sustainable aviation fuel and carbon capture usage and storage (CCUS), including CO2 shipping from South Wales ports.

This would be the first CO2 shipping industry in the UK and it is estimated could create around a thousand jobs in South Wales, as well as create an entire new industry for the region.

Dr Chris Williams, who is heading up SWIC for Industry Wales, said: “Firstly, we need to thank Costain for pulling the project together for us and thank the major businesses, SMEs and Universities that are prepared to contribute huge amounts of effort and financial resources to this very ambitious, but realistic plan, to decarbonise the industries of South Wales. Not only would it benefit the environment locally, as well as globally, but it would also mean that we are sustaining and reinvigorating the industries that South Wales has relied on for over a century.

“The UK Government has set in law that the UK needs to be net zero by 2050, but the South Wales Industrial Cluster has ambitions to do so earlier, by 2040, in support of several points within the 10 Point Plan and the Industrial Decarbonisation Challenge. Our bid, if successful, will help to achieve this in Wales.”

Dr Williams said the fact that so many Welsh businesses are supporting and working on the bid has been pivotal to its achievements so far: “We have a unique opportunity here to change the fate of our environmental and industrial future and so it has been great to get so many businesses supporting and advocating our vision and plans.

“This deployment project will help unlock the route to net zero in South Wales, therefore helping support the future of existing industries, businesses and jobs, but also to help develop the net zero infrastructure required to attract new industries and businesses from abroad and use hydrogen for home heating, power generation and transport across the region. This will pave the way for more jobs, more prosperity and a cleaner environment.”

Dave Richardson, project director at smart infrastructure solutions company Costain, which is leading the deployment project on behalf of the cluster, said: “We believe there is a real opportunity to explore drastically reducing carbon emissions in the South Wales region, which will not only contribute to the UK’s net zero target, but will positively impact local air quality, jobs and economy.”

The decision on the awarding of the grant funding is due to be made by Innovate UK and the UK Government’s Department of Business, Energy and Industrial Strategy in mid-December.