Posted on 7 Jun 2016 by The Manufacturer

Despite best efforts, too many vocational qualifications continue to be viewed as ‘Cinderellas’ when placed alongside purely academic achievements.

Yet, employers will say, in many cases, strong vocational qualifications put candidates in a much better position than those who have only studied traditional GCSEs, A-levels and degrees.

Now we can celebrate a major milestone with the announcement that numerous EAL awards have been allocated UCAS points – giving them parity and context alongside academic achievement.

We have been fighting for this recognition for a long time – and will continue to voice the need to make further inroads to improve the status of vocational pathways to work.

If the Government’s desire to achieve three million new apprentices by the end of this Parliament is to succeed, alongside the introduction of the apprenticeship levy, then the perception of vocational qualifications must change.

Awarding UCAS points, after a rigorous process, is a big step in the right direction and gives a fairer weighting to learners who have achieved these qualifications as they seek access to higher education and a career.

As I told the All Party Parliamentary Group for Apprenticeships in May – robust and validated qualifications are at the heart of the UK skills system. 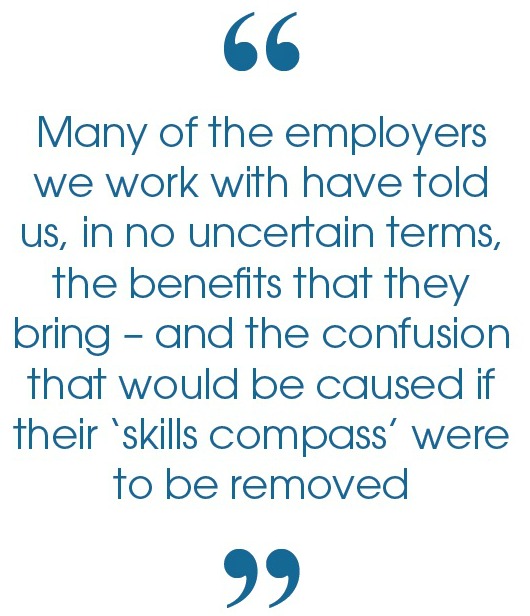 Without properly certified qualifications, industry, learners and educators can only make an inspired guess as to how good any training regime might be.

The skills landscape is changing as fast now as it has ever done – and there are many questions to be answered – including will Trailblazers include certified qualifications?

Our worry, having fought so hard to give learners, employers and the nation as a whole, this milestone moment which pushes vocational pathways towards the parity they deserve – our efforts could be undone by such a decision.

Two steps forward – one step back? All our intelligence, from learners and employers, is very clear – we are de-skilling the sector if we do away with qualifications in apprenticeships – we need to ensure skills are transferrable and quality is embedded.

The Industry Apprentice Council (IAC) – which EAL founded – has become the voice of apprentices across the country and is unequivocal about its support for the structure and certainty that qualifications bring.

Many of the employers we work with have told us, in no uncertain terms, the benefits that they bring – and the confusion that would be caused if their ‘skills compass’ were to be removed.

How would they ensure that standards wouldn’t slip? How could they judge whether new or existing employees were up to the mark?

EAL is the pre-eminent awarding organisation for engineering and advanced manufacturing, rail and building services sectors.

EAL, along with other awarding organisations has invested millions of pounds and many decades, ensuring that the system works.

Just at the point when we are beginning to achieve a semblance of parity, it would seem a great shame to rip up the rulebook and damage the system that is beginning to work so well.