Why does England consistently get skills training and education wrong?

Professor Ewart Keep holds the chair in Education, Training and Skills at the Department of Education, Oxford University and is director of the Centre on Skills, Knowledge and Organisational Performance (SKOPE), here he offers his assessment.

Everything to do with skills and training depends on the relationship between employers and government, and where the balance of power and influence sits between them. In England, it is tilted very much towards government.

In 2015, for instance, the government decided to abolish the UK Commission for Employment and Skills, founded just seven years earlier (by a Labour government, which possibly explains why a Conservative government abolished it).

It also decided to cease funding the sector skills councils, which were the bodies that advised government on what industry needed in terms of skills.

SEMTA and Make UK are still there, but once you go outside of mainstream manufacturing, there are large chunks of employment where effectively there’s no body that the DfE can talk to about skills and training needs.

Does this let employers off the hook? No. In England, most employers expect government to fund training, making only a small or even no financial input themselves.

In Germany, employers are expected to do more. They actually run a mass high-quality apprenticeship system, with the state only paying for the off-the-job element; the employers pay for all the on-the-job, and the wage costs.

They don’t expect to get it for free. Indeed, employers there have to be able to deliver high quality on-the-job training, and they don’t farm out their apprenticeships to external training providers.

If you went to Mercedes and said to them, “Well, you know, do you outsource the design, management and delivery of your apprenticeship system?” they wouldn’t understand what you were talking about. It would be inconceivable to them that any large employer in Germany would do that. But in England it’s quite common.

The issues with the Apprentice Levy have been discussed elsewhere, but the other main plank of the government’s skills and training initiative, T Levels, is equally problematic.

The biggest problem of all is whether or not it’s actually economic for an FE college to provide them. This is because the government talks about T Levels as though everyone after the age of 16 would either be doing an academic A Level or a technical T Level.

That’s really not going to be what happens, because T Levels are set at level three, and they’re really quite demanding. The majority of young 16 to 19 olds in FE colleges are currently doing level two or below.

There’s therefore a huge question about getting enough young people to a level where they’re actually able to start a T Level. Colleges have really only got three years to do that, after which, at age 19, student funding stops.

Any fewer than 18 students, and you probably can’t make a course break even, and therefore they won’t run it. The government has made this problem worse by allowing schools also to offer T Levels, which is bizarre because this completely undermines the economics for the local FE college.

What will happen is that schools will pick the non-technical T Levels, such as business studies, reducing the actual overall flow of people who might go to college to do it, which means that colleges will find it harder and harder to put together viable cohorts.

Then there is the requirement for the mandatory 45 days’ work placement element in T Levels. For firms that don’t have a strong internal training function, and which don’t have relatively high-quality line management that could supervise these work placements and keep an eye on the kids, it’s going to be deeply unattractive.

And for small firms, particularly in sectors where small firms predominate, like engineering, digital and media, it’s going to be really, really hard to make it fly.

With T Levels due to be taught from September 2020, there is very little time available to iron out these issues.

So why does government have such a distorted view of manufacturing and business? I think it’s down to attitudes in the civil service whose model of employers is rooted in the 1970s. They still think in terms of BP, ICI, British Steel, huge, mega employers with massive workplaces.

Their real understanding of small firms is limited, which is really problematic, because the reality is there are a lot of small firms in England, and a lot of their policies really don’t work very well for those smaller entities.

Arguably, certainly in terms of the Levy, they’re obsessed with what big firms are doing because they are the only ones paying it.

Again, though, we should not let employers off the hook. A new report by Unionlearn, part of the TUC, finds that employers’ spending on adults and the amounts of training they’re providing their adult workforce, are falling very badly.

Between 1997 and 2017, the amount in terms of hours of training provided by employers in the UK to the adult workforce dropped by around 60%. 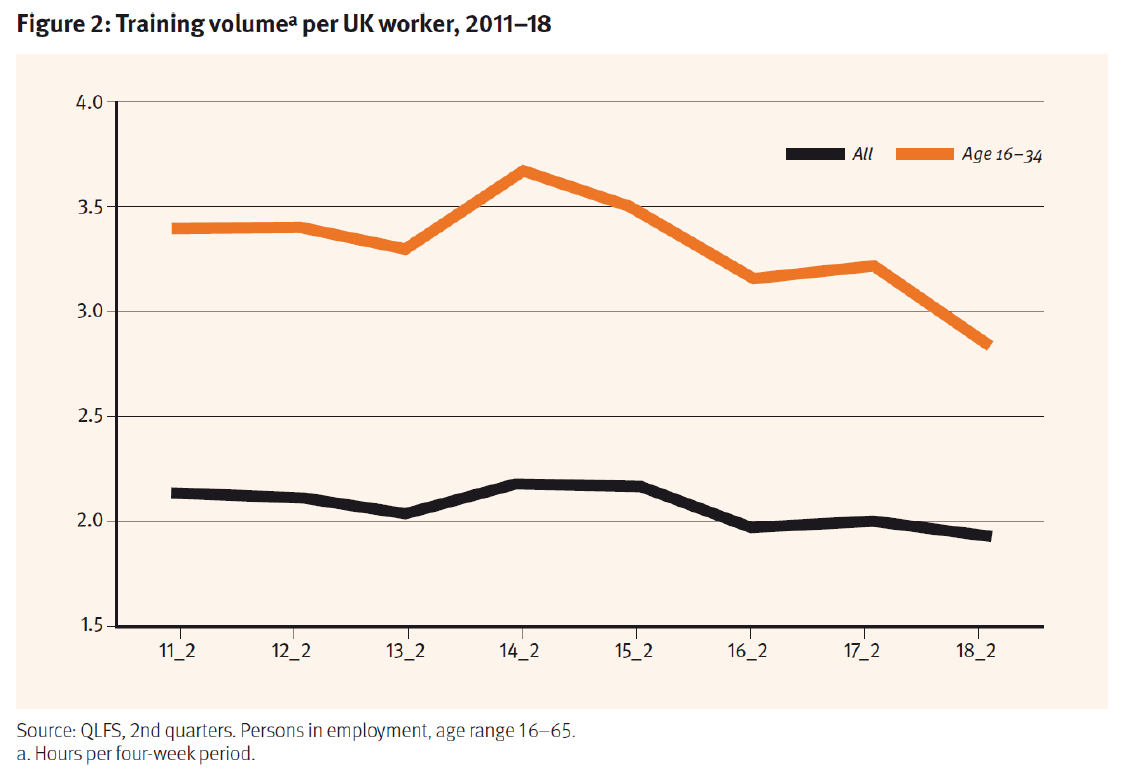 That scares me because that suggests that employers have basically stopped training large chunks of their adult workforce.

Currently, once people finish their initial education and training, a lot of them will not get much training ever again. And in a world that’s changing quite rapidly, at least technologically, that’s a problem.

You can learn more about Professor Keep’s work at SKOPE here www.skope.ox.ac.uk