Husband and wife Stephen and Emma Trollope are the mutual co-founders and directors of The Temporary Solutions Group, an innovative design and manufacturing company providing “pop-up” kitchen and bathroom facilities for those engaged in insurance claims and renovation projects.

At university, they each studied business and product engineering before heading off into their respective fields. After her degree, during which time she spent a year-long industry placement at Imperial Chemical Industries (ICI), Emma spent the next 17 years working in sales for two major construction manufacturers. 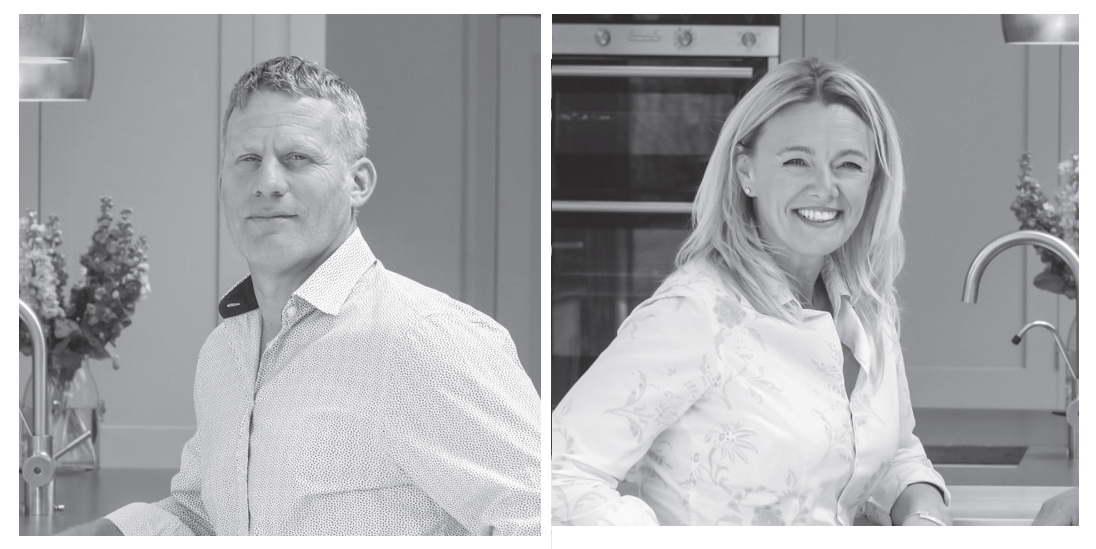 Stephen, on the other hand, went into software sales for big corporations like General Electric (GE) and Symantec. Both rose to the top of their games, surpassing sales targets amid an increasingly pressurised corporate environment.

Emma’s education and vast industry knowledge helped elevate her within her own organisation at the time, putting her in close quarters with architects and designers. It was here where she first began to notice manufacturing opportunities she felt were not being satisfied.

“For me, the interesting part of working for a manufacturer was being at the heart, the coalface of my organisation, working with architects on specification. I could just see how many things they were doing could be massively improved. But because I was in sales, seeing that through could be very frustrating.”

Stephen was facing trials of another kind. The mounting pressures of work were becoming intolerable and had begun seriously impacting his mental health.

“I actually had a breakdown where I sort of hit a brick wall fairly severely and wasn’t able to function in my role any longer. The GP said, ‘I see lots of people who are stressed, but only one or two are in your state. If you don’t change your lifestyle by the age of 40, you’re going to be dead’. That really forced me to re-evaluate my life and what I wanted from it.”

After a frank discussion with a career advisor, Stephen turned his back on the corporate world and resolved to retrain as a tiler and plasterer, founding SD Plastering.

Emma and Stephen bought and renovated several properties together that were then used by their local council as social housing for people coming into the UK to live.

They also saw the hardship faced by those without recourse to washing and cooking facilities during such restoration projects, and in 2014 founded Temporary Solutions.

“It didn’t even enter our heads that it might be something we couldn’t do,” Emma said. “But because what we wanted to do was so unique and because there was no one else to go to for advice, we had to do it ourselves.”

The pair set about designing and building custom kitchen and bathroom units to specification, inside trailers or as portable hubs. To date, the husband and wife duo have financed production of 12 basic units that they manufacture themselves, while building their customer base and ensuring their products are properly insured and regulated.

“Transforming an idea into a business is the hard bit,” Stephen said, “and that takes a level of risk, to move away from one’s comfort zone where you accept things like zero salary next month because you’ve left your job.”

“The insurance companies were an enormous challenge and they still are today,” Emma added. “It’s brand new to them and you’re effectively asking them to take on a completely new concept. That’s precarious and insurance companies are extremely risk-averse people to work with.“

But on the flipside, if it hadn’t been so difficult, we could not have grown sustainably. We were able to grow the business at a rate that was affordable to us and when we came across a better way of doing something, we could adapt.”

It undoubtedly requires of a person tremendous courage to risk all they have achieved in life for the sake of a single idea. So much rests on its success. More so when the person they love most is prepared to do the same.

The Temporary Solutions Group is a success largely because Emma and Stephen seem to embody enterprise and innovation, and because both are prepared to adapt and change when it is necessary.

“I believe leaders need to have a single-minded determination to succeed,” Emma said. “This must also be coupled with passion. It is important to be decisive, knowing there can be a few wrong decisions before the right one is made.”

In 2018, The Temporary Kitchen Company, one of the couple’s business ventures, was awarded the Queen’s Award for Enterprise: Innovation.

Emma – The watch. The intricate precision of a stunning timepiece and its production is fantastic.

Stephen – It would have to be the supercar. I don’t really mind which make and model.

Emma – I’m a lead singer in a covers band. We do things like Blondie, Stereophonics, The Jam, Florence + the Machine.

Stephen – During my GCE O Levels at the age of 16, I was diagnosed with severe dyslexia and assessed as having a reading age of an 11-year-old and a writing age of a 12-year-old. As a result, I would definitely say don’t let any form of disability shape you.

Emma – I have many diverse interests that I would love to have been able to pursue, such as tennis, music and interior design. However, my ultimate dream would have been in veterinary science.

Stephen – Working towards a ‘dream job’ would have been personally detrimental and, as a result, I wouldn’t be where I am today. I would have ignored opportunities that came along had I pursued just one career.