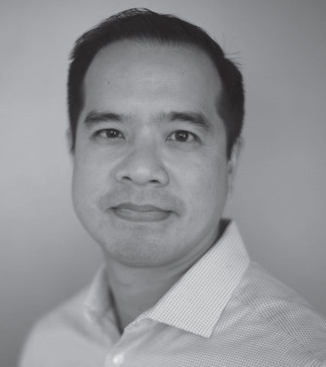 How did a Canadian who studied at MIT and who, after a career in investment banking, moved to London to become a property developer, go on to manufacture the first innovation to tampons in almost a century?

It all happened because of a chance conversation with a gynaecologist near London’s Harley Street.

Thang Vo-Ta met 71-year-old Dr Alex Hooi in London 14 years ago. Alex was expanding his practice at the time and the pair made an arrangement in which Thang would lease Alex an office space he’d recently built.

The men became fast friends because Thang relished talking to doctors, learning of their experiences. One day, Alex showed him the prototype for a period product he’d devised. His 30 years in gynaecology had taught him that a more effective and hygienic alternative to the tampon, pantyliner and pad was necessary.

“Alex had invented a two-in-one product that solved a lot of the problems of other products – with leaking, for example. If he saw an engineering problem because 70% of the time a product didn’t work, he wanted to solve it.”

Thang showed the prototype to his then girlfriend (now wife) and his sisters, and all three agreed that Alex had hit upon a novel idea. Ten years and seven-figure sums later, Thang and his developers had patents in countries across the world, including Australia, Canada, Brazil, India, Europe, China and the US.

“We obviously needed a woman on board to perfect this product,” Thang said. “So, I asked the London College of Fashion who their most talented garment technologist was. They said, ‘Oh, that’s easy. It’s Eva, she’s a rockstar!’”

After hundreds of user trials and several false starts with developers, Thang’s team decided to manufacture the products themselves, with support from Innovate UK.

“I am such a big fan of theirs,” he said. “We wouldn’t be here without them. We have, with their support, been able to build an automated machine that now makes this product, which we’ve named the Tampliner.

“Of course, I didn’t grow up ever thinking that I’d found a tampon start-up. But there hasn’t been significant innovation in this area for 80 years, yet it’s something that half the world uses. And fortune favours the brave. You must be bold, never give up, and believe when no one else will. The responses we get from our users is what continues to drive us; that’s our biggest motivation.”

Since childhood I’ve been fascinated with mechanical watches featuring the perpetual calendar complication. It’s a constant reminder of the marvel of engineering that a machine on one’s wrist can automatically adjust for the leap day every four years, powered by the natural movement of the wrist.

I’ve been a guest performer on the Blue Peter show where I duly received a badge, which I gave to my then very impressed girlfriend (now wife).

I’d be a music teacher or sports coach, trying my best to inspire my students to chase their dreams with reckless abandon.